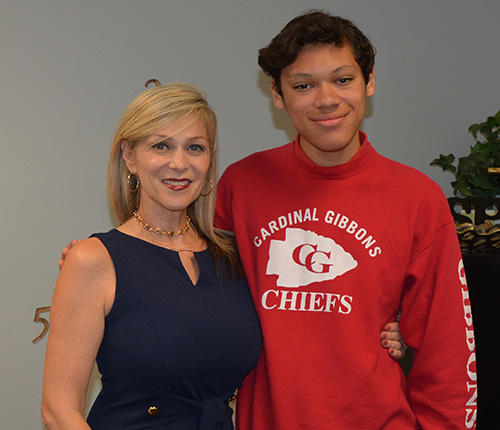 Lori Kubach, assistant principal of academics at Cardinal Gibbons High, poses with junior William Gonzalez, who got a perfect score of 36 on his first attempt at the ACT college admissions test.

FORT LAUDERDALE | William Gonzalez, a junior at Cardinal Gibbons High School, has earned a perfect score of 36 on the ACT college admissions test.

Perhaps more impressive: William achieved perfection his first time taking the test this April, after preparing for it on his own. Of the more than 1.9 million 2018 graduates who took the test, less than one percent achieved a perfect score. William won’t graduate until 2020.

The ACT consists of tests in English, mathematics, reading and sciences, each scored on a scale of 1-36. A student’s composite score is the average of the four test scores. According to a press release sent to William’s family by the ACT, “Students who earn a 36 composite score have likely mastered all of the skills and knowledge they will need to succeed in first-year college courses in the core subject areas.”

William credits his success on the ACT to his drive to be accepted into top college programs, where he hopes to study biomedical or chemical engineering. His course load includes AP United States History, AP English Language and Composition and AP Calculus AB.

William also belongs to several academic honor societies and clubs while competing with the cross-country team. He is a member of National Honor Society, Spanish National Honor Society and Mu Alpha Theta. He is also a group leader for the Science Olympiad team, who has medaled at multiple events throughout the country.

The Tamarac native’s mother, Nancy Gonzalez, said her son “is always working and studying on his own at home; he’s incredibly dedicated and driven.”

“We are so proud of William for this remarkable achievement,” said Lori Kubach, assistant principal of academics at Cardinal Gibbons. “He is certainly in rare company.”