Football adds to life lessons at St. Thomas U. 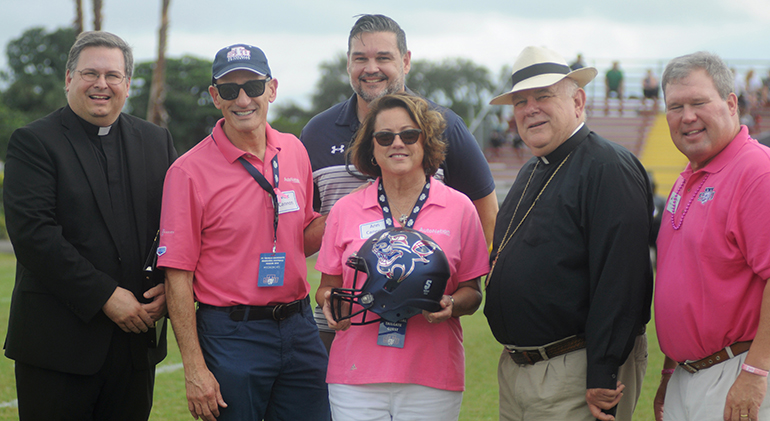 MIAMI GARDENS | Football has added life to St. Thomas University this season, a life that the Archdiocese of Miami helps sustain.

Archbishop Thomas Wenski joined the university in celebrating that life and involvement in the nearby community during their Oct. 26 game versus Ave Maria University, when the archbishop and the university lent their support to Breast Cancer Awareness. In turn, St. Thomas honored Archbishop Wenski and the archdiocese for their support.

The archbishop said via email that St. Thomas provides upward mobility for the poor through education.

“Most of its student body are the first ones in their families to go to college,” the archbishop said. “And STU is a great option for graduates of Catholic high schools. At the same time, STU allows Catholic high school students to participate in courses for college credit while still in high school — giving them a head start of their college studies.”

Armstrong and his wife are doing the same for their children.

“We are so appreciative of all the teachers, administrators of all our archdiocesan grade schools and high schools that are preparing our students to live a values-based life,” Armstrong said. “What we’re trying to do as the Catholic university of Miami is to do the same — representing the archdiocese, continuing the education. So as our students go out into the real world, they have that strong faith and values-based education that’ll help them make the right decisions.”

Armstrong said that STU benefits from its archdiocesan identity. It is one of only 10 colleges and universities in the United States that are sponsored by their dioceses. Archbishop Wenski said the archdiocese has been part of St. Thomas’ identity since the Augustinian friars established Biscayne College on the current St. Thomas campus in 1961 after being expelled from Cuba.

That’s good. Football and other programs associated with the sport have brought an 83% increase in enrollment. U.S. News and World Report named STU No. 1 for social mobility by regional universities.

To Armstrong, taking part in football, basketball, band or dance team means students are involved in something much greater than themselves.

Alumni were happy that Archbishop Wenski came to a St. Thomas football game. Armstrong said the archbishop has frequently visited the university to celebrate Mass or graduation.

Football coach Bill Rychel said that the archdiocese’s support carries over to the team, and the Bobcats will benefit not only on the field but in the classroom.

Rychel said that football supplements St. Thomas’ mission: Leaders for Life. He said that the university’s faith-based education that enhances leadership skills “just speaks volumes to what the archdiocese is doing and what the mission is.”

Most importantly, St. Thomas University gives Catholic school students the opportunity to attend a Catholic university. Eddie Cora made the leap from 1999 Belen Jesuit graduate to St. Thomas. He credits the university for showing him how to apply the faith to his business life.

“Thank you for St. Thomas, because I wouldn’t be doing what I do without them,” said Cora, president and CEO of Miami-Dade Fair & Exposition. “I can take the timeline of today straight back to when I started here in college and the way it prepared me. I got my job today, I got my life today and family because of what I learned here and what they instilled in me.”

Junior Silva, St. Thomas class of 1999 and owner of Concession Service Systems, also lauds the university for helping him build a successful career and family. He said that while the environment has changed, the values are still there. A lot of it has to do with Archbishop Wenski and his leadership, he said.

“I’m tremendously honored. Whenever he comes out (to visit), it’s always a thrill,” Silva said. “None of this could be possible without the full support of everybody, including the archdiocese.”