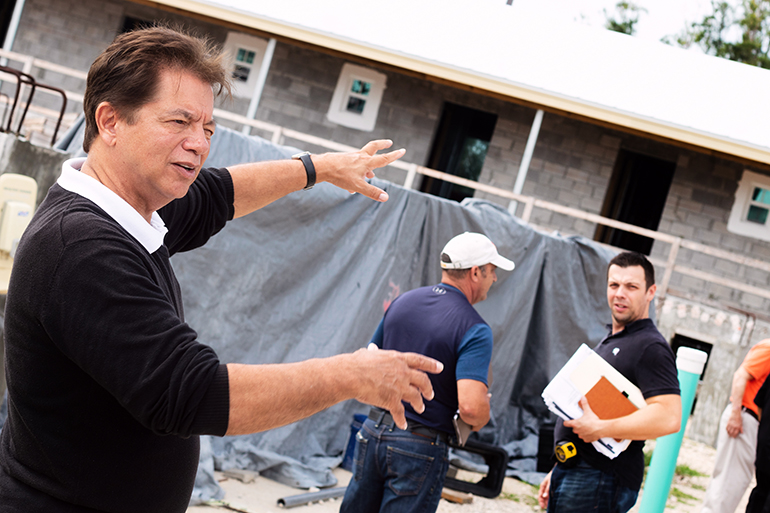 Peter Routsis-Arroyo, director of Catholic Charities of the Archdiocese of Miami, makes a point during a recent tour of the construction site for a new Catholic Charities-sponsored St. Bede’s Village workforce development facility in Key West, expected to be completed as early as next summer.

The following is the first in a series about Monroe County parishes and work of Catholic Charities in the Florida Keys.

MIAMI | A telling detail of how scarce affordable housing has become throughout the Florida Keys can be found in Florida City, where hourly wage earners catch a daily bus ride to and from jobs several hours away in the Middle and Lower Keys.

With local homes sometimes fetching up to $5,000 a month on the vacation rental market, and many previous properties still not made whole following 2017’s Hurricane Irma, workers and low-income residents throughout the Keys resort to tough measures to maintain a foothold in the islands.

In addition to those who daily travel out of the Keys at the end of every work day, Church staff in the region have noticed others living in substandard situations such as tents, or in cars situated off the main road and near still-un-rebuilt homes following Irma. 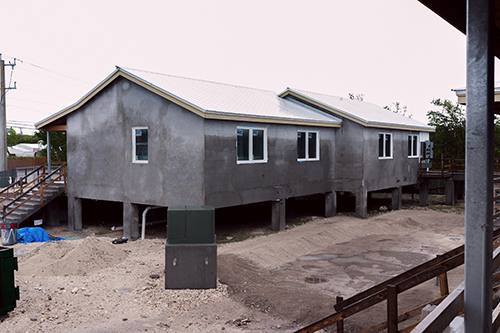 Under construction in Key West is a new Catholic Charities-sponsored St. Bede’s Village workforce development facility for Monroe County, expected to be completed as early as next summer. The St. Bede's facility currently has 10 units of affordable housing with an additional 37 new units in the works.

In late September 2017, Irma landed in the Florida Keys at Category 4 strength, with peak winds of 185 mph. From Key Largo to Key West, the area was littered with storm-related wreckage of varying degrees, raising concerns about housing prospects, especially for the local workforce.

“There are a lot of homeless just four miles away from here near the Marathon downtown and grocery store area, and there has been a high rate of suicide and substance abuse among renters especially after the hurricane,” said Father Luis Perez, pastor of San Pablo Parish in Marathon in the Middle Keys — a region that is situated along the northern cusp of what was Hurricane Irma’s most destructive path.

For many, especially “snowbird” seasonal residents, the 2017 hurricane was a kind of final straw, pushing them to give up on living here, a decision made easier perhaps by the difficulty of a slow rebuilding process and of limited quality health care and other services available within the Florida Keys.

With the confluence of a hurricane and other factors such as scarcity of available land came an opening for more and more of the Florida Keys housing stock to be retooled for the luxury market or taken off market for year-round rental altogether — to be marketed as expensive, short-term vacation rentals through popular online services such as AirBnB.

A report last summer in the Financial Times newspaper noted that higher end buyers have reentered the Florida Keys market in recent years, with median home prices in Key Largo hitting $631,100 last April. That’s up from $360,600 at their lowest following the U.S. housing crash of 2007, according to the realty website Zillow. 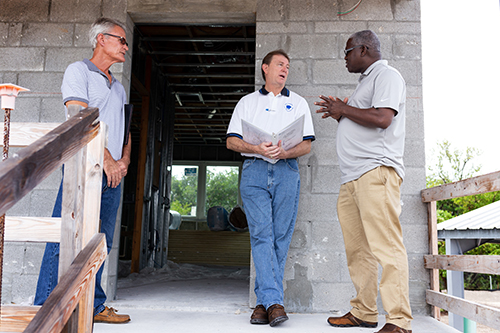 Jules Jones, right, CFO of Catholic Charities of the Archdiocese of Miami, makes a point during a walkthrough tour in Key West for a new Catholic Charities-sponsored St. Bede’s Village workforce development facility in Key West, expected to be completed sometime in the summer of 2020. With him are Key West-based architect William Horn, left, and Mark Shaughnessy, center, owner's representative for the building project.

In addition, Monroe County announced a moratorium starting in 2023 on all new homebuilding applications in response to a decision by the state that designates the Keys as an Area of Critical State Concern due to global warming, hurricanes and rising sea levels. If the moratorium holds, starting in 2023 no new building permits will be issued in the Florida Keys.

Peter Routsis-Arroyo, chief executive officer of Catholic Charities for the Archdiocese of Miami, said over the past two years, the impact of Hurricane Irma has caused Catholic Charities in Monroe County to substantially re-prioritize.

“Well over $1 million has been deployed into ‘rapid rehousing’ programs for those impacted by Hurricane Irma,” with Catholic Charities taking a leading role in those hurricane response grants and emergency response efforts, said Routsis-Arroyo.

A variety of partnerships, community programs, archdiocesan projects and grassroots efforts in the Keys helped fill in the social services gaps. Some of the simplest responses came in the form of providing transportation costs out of the region for those wishing to leave immediately following the hurricane due to loss of housing or income.

“We helped people stay afloat and we are still doing it. This was really a major role Charities played in the area,” said Patrice Schwermer, the Key West-based Catholic Charities program director for Monroe County.

Schwermer pointed out that each area of the Keys has its own unique issues: Big Pine Key may have more needy people than Marathon, for example, but each place has its own social services and housing dynamic. 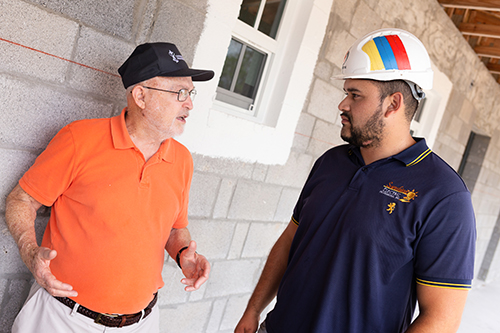 Tom Comerford, left, a member of Catholic Charities board of directors and St. John Neumann Parish in Miami, talks to a member of the building team during a recent tour of the construction site for a new Catholic Charities-sponsored St. Bede’s Village workforce development facility in Key West, expected to be completed sometime in the summer of 2020.

“It took us a while right after Irma to get going because we didn’t have a long-term recovery group, but it will be formed and ready if another disaster comes. We will be right there and ready to come back and do what we need to do,” Schwermer said. “That has been one of the positive outcomes of Hurricane Irma.”

Paul Navara, plant manager and a longtime member of the staff of San Pablo Parish in Marathon, said Hurricane Irma resulted in several outcomes for various categories of parishioners there.

“We lost a group of people who couldn’t find housing or afford housing that was available; we had another group who made post-hurricane repairs but ultimately sold and washed their hands of the Keys; and we had a seasonal group of parishioners who have given up on the Florida Keys as a ‘two-part’ lifestyle,” Navara said.

“It’s becoming more and more vacation property for people who come down to fish for a week or two. If you ride around (you will see) all the new housing projects are vacation rentals, not single-family homes,” he added.

In Key West, a new Catholic Charities-sponsored St. Bede’s Village workforce development facility — expected to be completed sometime in the summer of 2020 —will provide an answer to some of the housing shortage.

The St. Bede’s facility currently has 10 units of affordable housing with an additional 37 new units in the works. Also, on a separate piece of property in Key West (near St. Bede’s) St. Teresa Housing can house up to 5 individuals.

A Florida state agency has granted Catholic Charities of the Archdiocese of Miami nearly $1 million to assist its affordable housing projects there.

Catholic Charities Miami will receive $925,000 to be applied mostly to its new St. Bede’s workforce development facility. Approximately $150,000 will be set aside to help working families in Monroe County struggling with housing and rent affordability.

The Star of the Sea Foundation, affiliated with the Basilica of St. Mary Star of the Sea in Key West, also will receive $225,000 to support existing projects that are helping individuals recover from Hurricane Irma.

Catholic Charities board member and CPA Craig Armstrong, a member of St. Louis Parish in Pinecrest, recently toured the region as part of a Catholic Charities field trip and fact-finding tour for members of the agency’s board of directors.

Armstrong told the group that he sees the work of Catholic Charities in the Florida Keys as particularly challenging given the presence of temporary and short-term workers, particularly following a hurricane.

“I think the Keys in the next 15 years will be very different from what we see now with a different demographic base. And when you get a lot of damage you get a lot of laborers who may not have insurance or who are maybe away from their families which can lead to substance abuse and different things” Armstrong said. “I applaud what (Charities) is doing because you are catering to a moving target which is really, really tough to nail down, and when you think you have it nailed down it changes, and you realize we need to do something about this.”

Marianne Finizio, vice president of community relations and business development at Community Health of South Florida and a parishioner at San Pablo Church in Marathon, said that healthcare costs and availability are driving some of the poverty issues around Monroe County.

Finizio, who recently moved to the Florida Keys full time, keeps a dialogue going with a variety of Monroe County nonprofits including Catholic Charities. She said there is an upside to the turnover and exodus here following Hurricane Irma: “We are seeing younger families and younger adults coming in.” 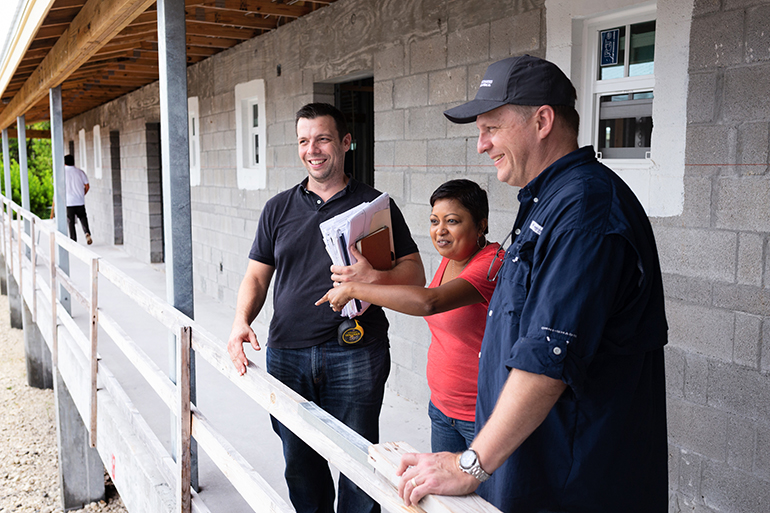 Devika Austin, center, chief administrative officer for Catholic Charities of the Miami Archdiocese, looks at the site of a Catholic Charities-sponsored St. Bede’s Village workforce development facility under construction in Key West. On the left is project architect, Joe Scarpelli, and on the right is Catholic Charities board member and CPA Craig Armstrong, a member of St. Louis Parish in Pinecrest.

Articles(46)
Basilica of St. Mary Star of the Sea