BIG PINE KEY | Father Jesus "Jets" Medina had been on the job six weeks when Hurricane Irma hit. Ordained in 2009, St. Peter was his first assignment as parish administrator. 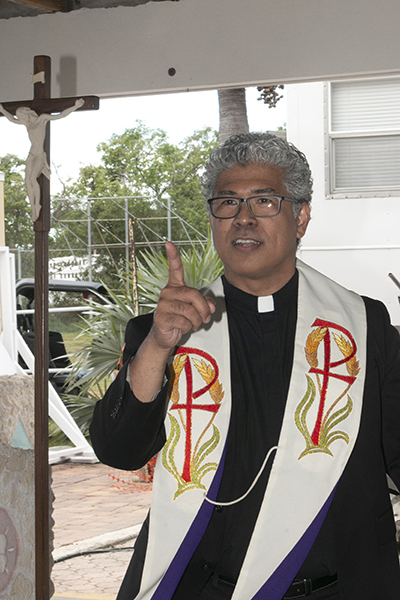 Father Jesus "Jets" Medina speaks to his parishioners before the start of the demolition blessing and groundbreaking ceremony Sept. 13. He had been on the job as parish administrator of St. Peter in Big Pine Key for six weeks when Hurricane Irma hit.

He termed it a “baptism by hurricane.” But one of biblical proportions, as he told his parishioners the Sunday after the hurricane, when he celebrated the first post-storm Mass amid “all the ruins,” in the parish’s outdoor pavilion. That Sunday marked the seventh week of his tenure as pastor.

“How many days did God take to do creation?” Father Medina said he asked his parishioners. “Six days. And on the seventh day he rested. That’s exactly what we’re going to do. We’re going to rest our total faith and trust in God, that he will help us rebuild our church.”

As luck — or providence — would have it, a photographer captured the priest and his people celebrating Mass under the pavilion, and the image appeared the next day on the front page of the Wall Street Journal. Soon enough, Father Medina said, “People from everywhere started sending us donations. It was a blessing.”

Many of his parishioners refer to him as a blessing as well.

“Let me tell you how God fixes things. He gave us that priest, that healing shepherd,” said Nancy McCrosson, the parish bookkeeper, property manager, and a parishioner since 2010.

That’s not to say that Father Medina had not felt shock and asked, “Why me?” after seeing the damage caused by Irma. But then he thought, certainly, Archbishop Thomas Wenski could not have foreseen what would happen when he assigned him to St. Peter.

“Only God knew that,” Father Medina said. “And he put me here.”

So he followed his own advice, and “rested” in God. “You chose me to be at St. Peter. You know what you’re doing. I don’t know. But you will help me and guide me.”

Connie Hauk, the parish’s administrative assistant and a parishioner for 26 years, is certain of this: “He’s been such a blessing for us,” she said. “If it took a hurricane to get him here, it’s been worth it.”