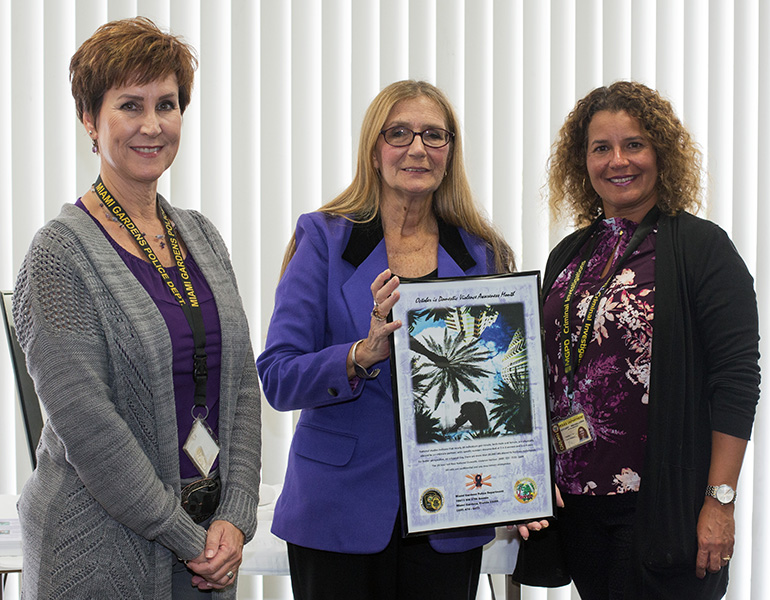 Karen Brent, left, and Edyleidy Mirabel-Urra, from the Miami Gardens Police Victims Advocate Service, pose with Susan Buzzi, center, who is holding one of her photos on domestic violence.

MIAMI GARDENS | Five years ago, Susan Buzzi’s 22-year-old niece was murdered by her partner in front of their 9-month-old child. Since then, the former police officer has dedicated her life to fighting the insidious scourge of domestic and intimate partner violence, supporting victims and alerting people to any abuse signs in their lives. 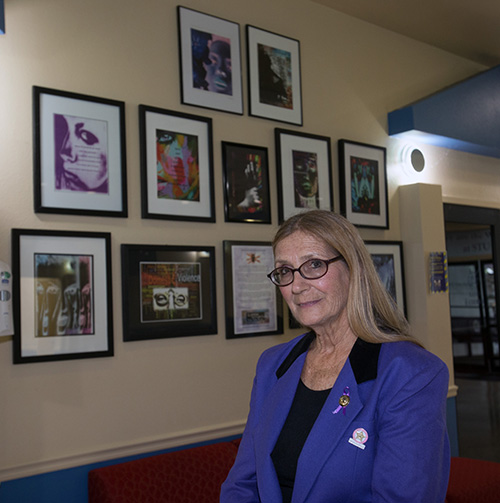 “I’m Catholic. When this event occurred with my family it just changed everything, my whole direction. She was assaulted and murdered in the house by her partner. It was devastating to our family,” Buzzi said. “No one was really able to detect it.”

Buzzi serves as a victim advocate, educator and coach practitioner who uses healing art, music and written therapies to help victims break through pain, anger and discouragement. She spoke to students on the prevalence of this “global epidemic” —which isn’t declining in the U.S with the surfeit of firearms.

More than 10 million in the U.S. experience domestic violence every year, with those ages 16-24 most vulnerable. Every nine seconds a woman is assaulted, said Buzzi. The National Coalition Against Domestic Violence reports one in three women and one in four men are physically abused by a partner. Nearly half of all female homicide victims were killed by a current or former dating partner, according to a 2017 study by the Centers for Disease Control and Prevention.

In addition to physical signs, Buzzi said that victims of abusive relationships are often unable to express their opinions and have to “walk on egg shells.”

She urged young adults to be cautious in using dating apps and social media to avoid phony profiles and bait sites for human trafficking. Those in abusive relationships must remove themselves from the situation or start by calling 911 or talking with a trusted person. 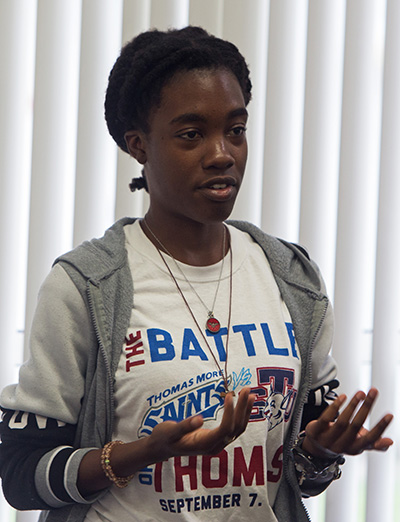 “In my experience as law enforcement the transition for the victim is critical; the leaving part is the part that is going to make or break him or her. In one of my last cases I had to physically drag someone out of an apartment and make her look at herself in the mirror and said, ‘Do you really want me to come back with a body bag? You’re leaving now with me,’” she said. “Don’t ever be afraid to pick up that phone.”

She urged participants to check on anyone they know who is fearful, anxious or withdrawn. She also praised the #MeToo movement for encouraging people to speak out and seek justice. And she spoke about the “greater responsibility” of a Catholic university.

In the student center, Buzzi also exhibited trenchant artwork throughout October exposing the heavy emotions of domestic violence: One image featured handcuffs over a woman’s eyes punctuated with words like unreported, stigma, and intimidating. Another featured an abstract colorful image of a woman’s face with the message, “You lied, cheated and beat me day after day. The nightmare continued, misery and torment, the arguments and mind games. I stayed too long but my scars will never define me.” 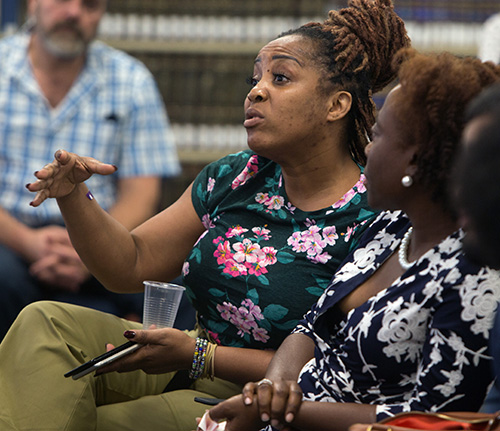 An audience member asks a question during the talk on domestic violence given by Susan Buzzi, victims advocate, educator, and retired police officer, at St. Thomas University Oct. 17, 2019.

Sexual abuse is when one doesn’t or can’t give consent, including those who are intoxicated or fearful. Digital control often involves an abuser asking for one’s passwords and controlling time spent online. Then there’s financial abuse.

“It’s somebody who controls how you get your money, spend your money, use your money, is looking at your bank statements, telling you what jobs you can and can’t have — also threatens physical violence,” Paul said.

Garavito-Bedoya challenged participants to question the health of their relationships. Abuse frequently begins when one dating partner tries to control the other’s activities and behaviors. Then “it’s hard to reach out because you’ve already severed a lot of friendships and relationships at that point,” said the therapist. “When there’s that control and one person is vulnerable to the other, that’s when it becomes abuse.”

People must set their personal boundaries, such as not to be called in the middle of the night. “If we know our boundaries, if we’re clear with who we want to be and what we want and they intentionally overstep that boundary, that’s what usually happens when it comes to abuse,” she said. 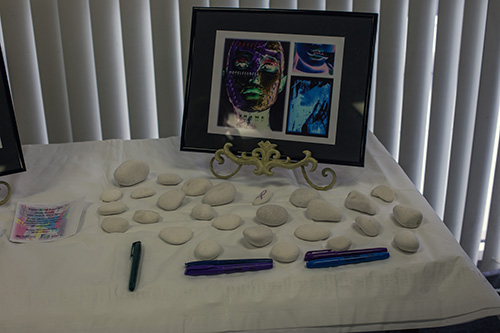 Leave no stone unturned, a representation of stones that victims of human trafficking use during therapy sessions with Susan Buzzi. A victim advocate, educator and retired police officer, she spoke at a domestic violence presentation at St. Thomas University Oct. 17, 2019.

Garavito-Bedoya herself learned about abuse when she experienced it between her parents growing up. “At the end of the day this isn’t something that happens to a small percentage, this is something very common in our society.”

St. Thomas President David Armstrong said that the forum fits with the school mission to work for the common good. “We believe it’s in our mission to help people know the right way to deal with tough issues,” he said. “We’re so appreciative of our people here at St. Thomas who recognize the importance of talking about tough issues so hopefully we can defeat these bad behaviorsÃ¢â¬Â¦ and help young people to make better decisions.”