SOUTHWEST RANCHES | Camille Laurino and Rosalie Constantino seemed somewhat surprised.“We don’t even know how we got this award,” said Constantino of St. Edward Parish in Pembroke Pines, who along with Laurino received the Esperanza Ginoris Award at this year’s Catechetical Day. 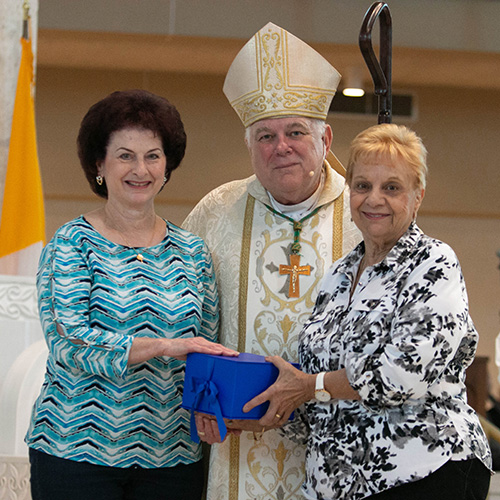 The award is named after a former archdiocesan catechist, and honors “persons or teams who best exemplify the standards of catechetical ministry excellence.”

As far as Constantino is concerned, she’s just doing what she has been doing since she was attending college in New York: teaching the faith to others. She continued volunteering as a catechist while raising a family and pursuing a career as a special education teacher. And she kept doing it when she moved to South Florida, first volunteering at St. Helen in Fort Lauderdale.

For more than 20 years now, she has been a volunteer catechist at St. Edward, where she was also among the first parishioners. Her parish number is 58.

Two nights a week, the church’s worship space is divided into classrooms where nearly 500 children learn their Catholic faith. Laurino is the director of the religious education program. Constantino is the coordinator, her “right hand.”

“My body gets a little tired but my brain keeps going,” said the 80-year-old, who also received the Msgr. Agustin Roman Award for her 20 or more years of uninterrupted ministry as a catechist.

What keeps her going? “Love what you’re doing,” she said. “That’s the answer.”

Other News from St. Edward Church

Saturday, 18 May 2019
Catholicism is a communal religion