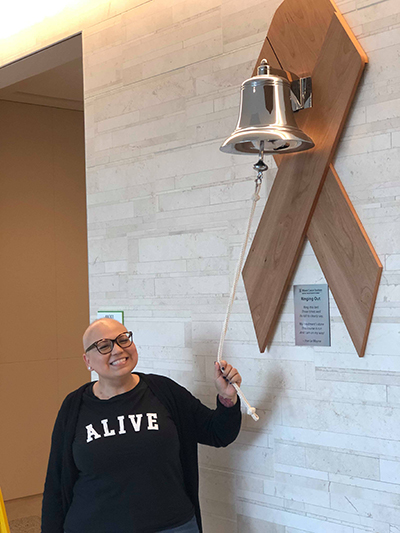 Angela Suazo rings the treatment completion victory bell at the Miami Cancer Institute of Baptist Health South Florida. The plaque beneath has a poem by Irve Le Moyne which states: Ring this bell three times well its toll to clearly say, my treatment's done, this course is run and I am on my way!

HIALEAH | Angela Suazo is a 32-year-old with a bucket list. Among the many things on her list, she has checked off eating gelato in Italy and a crepe in France; she learned to play an instrument (the guitar), spent Christmas in her native Honduras, and most importantly, fell in love and got married.

What most people don’t know is that Suazo has also checked off her list reconstructive breast surgery, the result of a double mastectomy and breast cancer.

In June 2018, five months away from celebrating her five-year, cancer-free mark, she was diagnosed with stage 4 metastatic breast cancer, which is treatable, but so far, incurable.

With cancer reaching her ovaries, liver, lymph nodes, bones, lungs and brain, some doctors predicted she would be disabled for the rest of her life. She faced a whirlwind of emotions: confusion, anger, desperation, fear. But Suazo has learned never to go down easily. She called her pastor, Father Emanuele De Nigris, of St. Cecilia Church in Hialeah, who reminded her and her family that God was in control.

“I don’t understand how people just lay down and give up. Once people are diagnosed with stage 4, they quickly die. It hasn’t happened with me because obviously I have God, but personality is a big factor, and it’s going back to your faith. You have to believe in something more powerful than you. If not, you can’t go on,” Suazo said.

Suazo is a member of the Neocatechumenal Way, a journey — similar to the Rite of Christian Initiation of Adults but lasting much longer — aimed at rekindling the faith in people who have been baptized Catholics. During his papacy, St. John Paul II praised the Neocatechumenate as “an itinerary of Christian formation valid for our society and for our time.” The Archdiocese of Miami has 30 Neocatechumenal communities in eight parishes, including Suazo’s church, St. Cecilia.

“There is no commitment. They tell you if this is not for you, there are other things out there like charismatics, Emmaus. There are so many things you can do. This is what I love about the Catholic Church,” Suazo said.

Her faith story actually traces back to her native Honduras, where she was raised by her grandparents who were members of a Neocat community called La Inmaculada. As it turns out, her husband, Angel, and his grandparents were also members. She recalled playing with him when they were children. “He would call me four eyes because I wore glasses. He obviously liked me because he made fun of me,” she joked. As they got older, they participated more fully in the faith.

Eventually, Suazo moved to the U.S. with her grandparents. But she visited Honduras often, and almost always saw Angel at community gatherings. In their 20s, they reconnected through Facebook, and though the distance between the countries led them to “not having a typical relationship where you get to know the person,” they grew close. Over time, she asked him what his plans were, and he said that being with her was the only thing that mattered to him.

“He told me he loved me, and he always had since we were young,” said Suazo. 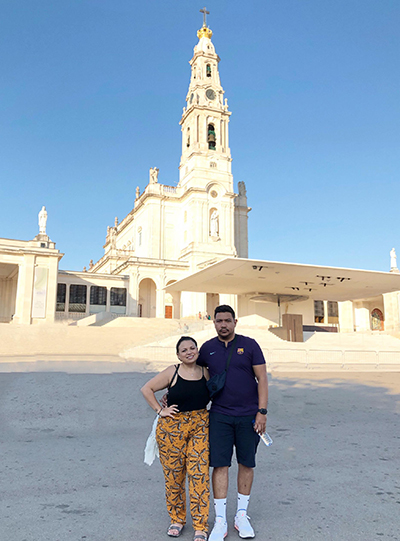 Angela Suazo and her husband, Angel, pose outside the Sanctuary of Our Lady of Fatima in Portugal. 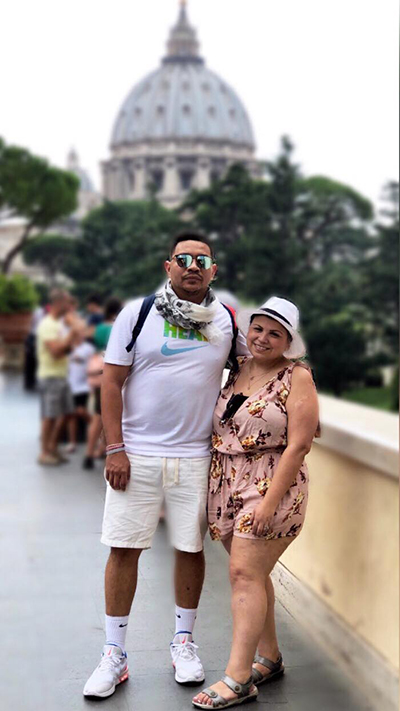 Angela Suazo and her husband, Angel, pose for a photo in Vatican City, which was on her bucket list of places to see. In the background is the dome of St. Peter's Basilica.

They were marred in the Church in Honduras May 27, 2013, and honeymooned in a town called Valle de Angeles, a pun she found funny because of their names, Angel and Angela. During that trip, she discovered a lump on her left breast. Angel made her promise to get checked once she returned to the U.S. A month later, at age 26, she was diagnosed with breast cancer.

“It was supposed to be my happiest time, and it wasn’t,” Suazo said. “You think you have control, but your mind cannot wrap around the glory of God because he has a bigger plan for you.”

After a double mastectomy, she went through nine rounds of chemotherapy. Simultaneously, she was filling out the paperwork for her husband to acquire a U.S. residency. Many friends and family members thought he had married her to get into the U.S., and they would separate once he arrived. Although her love was strong, she said she also worried.

By the time her husband came legally to the U.S., she was cancer free, in remission, and in the breast reconstruction stage. She was surprised when one of his first requests after arrival was to go to Mass. As it turns out, before he left Honduras, his grandfather had asked him to find a Catholic church as soon as he arrived in the U.S.

“He had told him to look for God because all would turn out well for him,” Suazo said. “And it’s true because if you’re with God and entering in his will everything will turn out fine.”

His grandfather, the only father figure he had in his life, died that same year. Suazo said it was a hard time for her husband. But he searched and found the closest Neocat community to their home, the one at St. Cecilia, and fulfilled his grandfather’s request. Suazo admits that she was a little apprehensive and rebellious about going, but after their first catechesis, she knew she had found her new community.

Suazo points out that her generation, and those younger, are easily swayed by the current social norm of “spiritual but not religious.” They figure they don’t need to go to church to believe in God.

“We live in our pleasures. But guess what? Now you get the boots that you want, and then what? With God, he is eternal and you feel filled. What gives us life, like the word of God, and brings us closer to God, we aren’t attracted to because we don’t want to think about the future,” she said.

Spiritually, Suazo has learned to think ahead. “Father Emanuele told me that I needed to accept this because it was God’s will, and that is the hardest thing to enter. Jesus entered into his will and he was sad, he cried, but he carried his cross, and accepted what it would be. If I’m really with God, I should carry my cross like Jesus did.”

She took to social media to share the process of her treatment, posting videos of moments in chemo, shaving her head, returning to the hospital because of infections, and celebrating the completion of parts of her treatment. Through it all, she says she is evangelizing people, including her best friend, and bringing them more into her world.

“Not because I feel like a saint, but I don’t want her, or other people, to realize that you have to go through something like this, something really hard, for you to have a religious encounter with God.”

In October 2018, she shared a similar reflection on her Facebook wall, writing, “Don’t wait for a sickness to come knocking at your door for you to start realizing what is important in life.”

Months before, she had taken her own advice, and started checking off things to see and do from her bucket list. She took out a loan, which she is slowly paying back, and used it to travel the world. “Not only did I travel to historical sites, but for the first time I left all of my worries in God’s hands and again he came through.”

She also added to her list: taking a hot air balloon ride, learning to surf, visiting Jerusalem, and buying a house.

“We do all of these crazy things, like a bucket list, because we don’t know how much longer we have in the world,” she said. “But I feel that with my perspective of how heaven is, none of this will matter.”

Angela Suazo (in red), and her husband (behind her) celebrate with their Neocatechumenate community.

Other News from St. Cecilia Church