Camillus House bids farewell to a brother with four hats 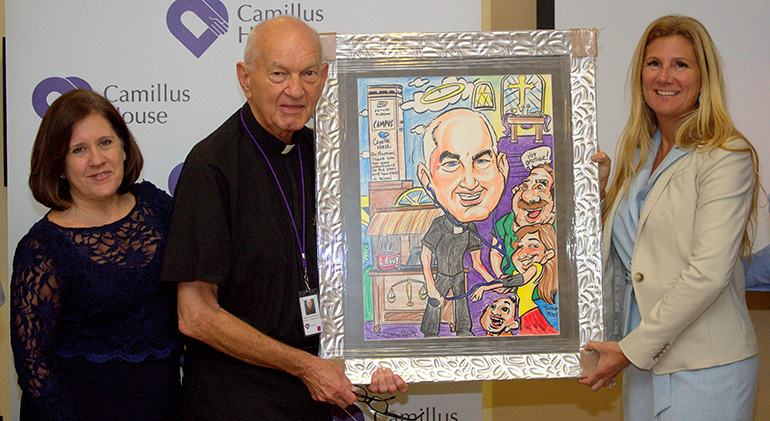 Officers of Camillus House present Hospitaller Brother Raphael Mieszala with an affectionate caricature after his farewell Mass at the shelter for the homeless. With him are CEO Hilda Fernandez, left, and Andria Hanley, vice president of development.

That was the friendly gibe from a longtime friend of Brother Raphael Mieszala, who was leaving the mission to the poor and homeless after a total of nearly 19 years. 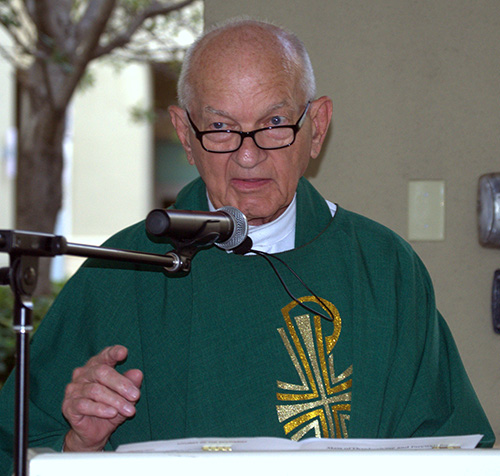 Brother Raphael, director of pastoral care, has been assigned elsewhere by the Hospitaller Order of St. John of God, to which he belongs. His farewell Mass and reception Feb. 15 were a mix of joshing, gratitude and bittersweet affection.

For Brother Raphael, 76, it was a time of characteristic quiet warmth.

“I feel so proud that I've been associated with Camillus House,” he said in his homily at the Mass, celebrated in the plaza of the organization’s main shelter. “I feel like it’s a part of me, and a part of me is going to stay here.

The event capped Brother Raphael’s two stints at Camillus â from 1997 to 2003, then 2006 to this year â separated by theological studies leading to his ordination as a priest. By then, Brother Raphael had already become a brother, a nurse and a lawyer. And he used it all in the service of the Church and the unfortunate.

“You're going to have to find four people to replace him â and it’s not in the budget,” England said during the reception, to laughs from the audience.

Again and again, those at the event reminisced on how Brother Raphael’s roles extended far beyond Camillus House. 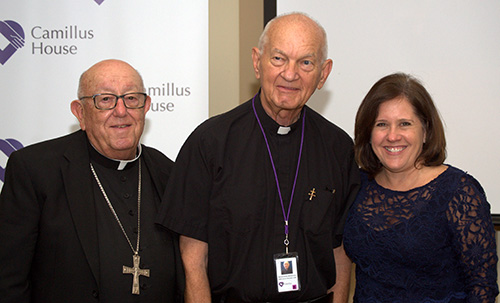 Hospitaller Brother Raphael Mieszala, center, poses for photos with fellow workers at Camillus House after his farewell Mass. Posing with him are retired Miami Archbishop John C. Favalora, who volunteers at the central shelter twice a week; and Hilda Fernandez, CEO of Camillus House.

They related how he filled in at the nearby Missionaries of Charity house, as well as for priests in parishes around the archdiocese. They also talked about his jail visits and his service as a chaplain at the University of Miami hospital.

“No matter where he's called, he comes,” said Archbishop John Favalora, who has volunteered at Camillus House twice a week since he retired in 2010. “I don’t think ‘No’ is in his vocabulary.”

During Mass, Brother Raphael preached a simple message of love and service, the two themes of his vocation. He said he most enjoyed working with children and the homeless, because they show gratitude so plainly.

Yet he reminded his 65 listeners that true service is meant for the good of others, not oneself.

“True agapeis the way that God loves us,” he said, using the biblical Greek word for unselfish love. “I should love for the other person’s good, not for my good. That's what we’re called to do at Camillus House: I love you for your sake.”

The reception followed in a meeting hall, with soft jazz flowing from speakers. Guests laughed at a slide show of Brother Raphael’s life, including photos as a child and a young man. Also on the tables were free copies of Paul Ahr’s 272-page book, “The Gifts of Camillus,” written in 2011 after its 50th anniversary. Ahr is a former president and CEO of Camillus. 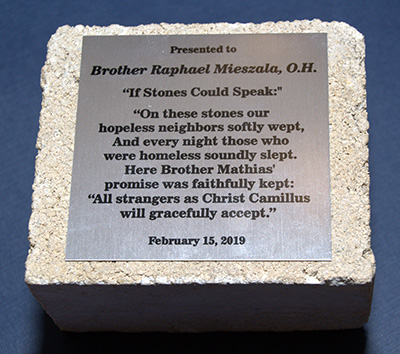 This short poem, inscribed on a block of Camillus House, was presented to Hospitaller Brother Raphael Mieszala at his farewell reception.

That proclamation also highlighted two achievements on Brother Raphael’s watch. One was completion of the Somerville Residence, a 48-unit home for homeless single parents. The other was acquisition of Metatherapy, a South Dade organization, which furnished an outreach for families in Homestead â and doubled Camillus House’s housing capacity.

England commented on Brother Raphael’s quiet persuasiveness as the two lobbied for government funds in Tallahassee and Washington, D.C. “He always offered good counsel. And I never heard him speak badly of any person. I'm proud to call Brother Raphael my friend.”

Hilda Fernandez, current CEO of Camillus, had her own surprise for Brother Raphael: a Jubilaeum pin for distinguished service to the archdiocese. Most of the cross-shaped pins were given to parish leaders Oct. 7, 2018, for the 60th anniversary of the archdiocese.

Fernandez said the award was for Brother Raphael’s service not only to Camillus House, but also his work as a parish relief priest, for ministry at local jails, and for serving as a hospital chaplain for the University of Miami.

Ahr offered another gift: a stone paver from Camillus’ original shelter in downtown Miami. On the stone was a plaque inscribed with a poem Ahr wrote, “If These Stones Could Talk,” on Brother Raphael’s service there.

For his next assignment, the Hospitallers are sending him to a school in New Jersey for mentally handicapped children. Which he said made him happy.

“I like working with handicapped children, also with the homeless,” he said.  “They're so needy â they need someone to show them they're human, not objects. Jesus said that as you did it to the least of them, you did it to him.” 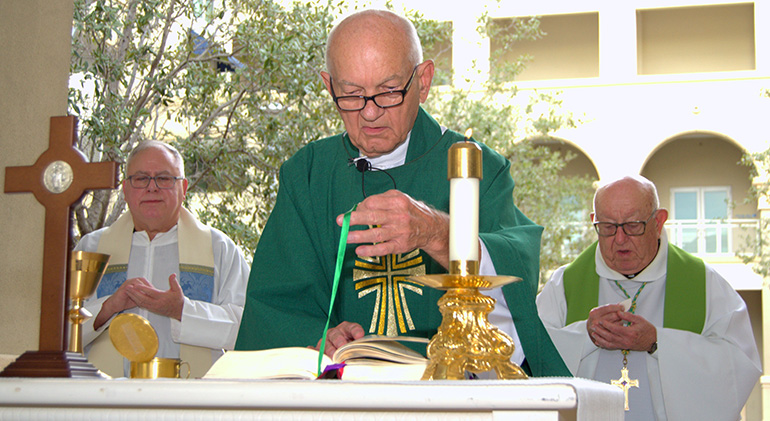 Jeanette Iannucci - 03/09/2019 10:07 AM
Having known the family for over 50 years, we can only imagine the pride the MMieszala family must be ffeeling. God bless you on your new Journey father Ralph. We wish you all the best with love from the iannucci family of New York.

Gloria M Loa - 03/09/2019 12:17 AM
You will be greatly missed Fr. Raphael. I thank God for the gift of your life. For being a spiritual guide and a friend, for being the angel that walked along with my family during our times of need and sorrow. Thank you for your love and commitment to help our homeless brothers and sisters. May our Lord bless you always. With love and gratitide, Miguel de Jesus, Gabriel de Jesus, and Gloria Maria

Hope Sadowski - 03/04/2019 04:47 PM
Dear Father Raphael will be missed. He has helped at my parish, St. Joseph on Miami Beach for which I am thankful. He was always so kind and his homilies so inspiring. The children he will be attending to are lucky to have him. Thank you Father for all you have done.