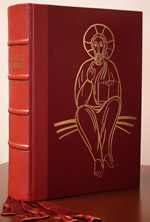 The change was approved by the U.S. bishops in response to a May 2020 letter from the Congregation for Divine Worship to the English-speaking bishops regarding the concluding doxology of the Collects in the Roman Missal (which also appear in other liturgical books).

ICEL, the International Commission on English in the Liturgy, pointed out the discrepancy while working on the translation of the Missal currently in use, but was told to retain the use of “one God.” The change has now been made and approved by the Congregation, not just for the U.S. bishops but also for the bishops of England and Wales, Ireland, and Canada.