MIAMI | Belen Jesuit Prep has appointed an alumnus, Andrés De Angulo, class of 1993, as head coach for swimming and diving.

“I am very excited that Andy will have the opportunity to coach once again. He is a person of integrity, an outstanding educator, and an excellent role model for our young men,” said Principal José E. Roca, ‘84. 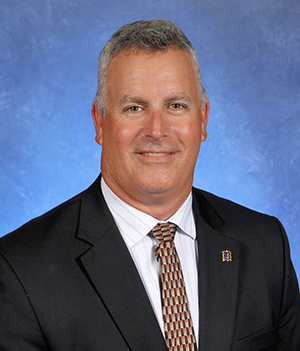 Andrés De Angulo is Belen Jesuit Prep's new head coach for swimming and diving. He is a graduate of the class of 1993 who returned to work at Belen in 2018 after a 20-year career at Ransom Everglades.

De Angulo, 45, is the dean of men and director of the Gian Zumpano Aquatic Center at Belen. He will coach and oversee the Belen Jesuit varsity and middle school swim teams. He holds a Bachelor of Arts degree in business administration from the University of Miami. He returned to Belen in 2018 after 20 years at Ransom Everglades.

"I am humbled and honored to be entrusted with the responsibility to lead the Belen Swim team,” said De Angulo. “As a coach, to return to my alma mater is a dream and I look forward to working with our young men in this capacity and setting the world on fire."

A former Belen and University of Miami team captain and member of the Belen Alumni Sports Hall of Fame, De Angulo is also a seven-time Miami Herald Coach of the Year with over 25 years of coaching experience. He has coached state, national, and Olympic champions. Most recently, one of his swimmers captained the University of Virginia women’s team to its first-ever team national championship and herself won relay gold.  In a few weeks, another one of his former state champion swimmers will look to repeat as Olympic champion with Team USA in Tokyo.