'If you don't move, the train runs you over' 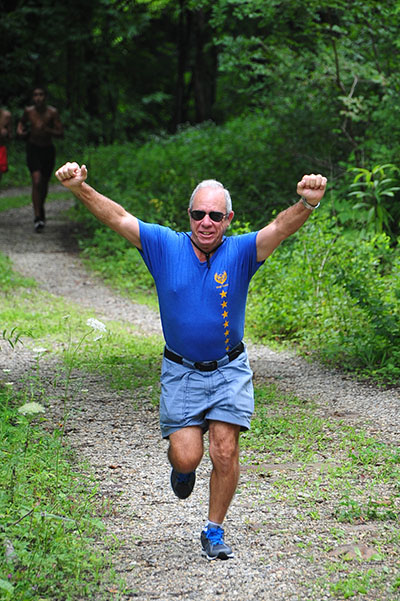 Belen athletic director Carlos Barquin is still running. At age 71, after 50 years on the job, he said he plans to take each year at a time and stay as long as he can contribute. "The kids keep me busy,” he said. “They give me something to look forward to. If you don’t move, the train runs you over. I need to keep moving."

MIAMI | Belen Jesuit’s story largely mirrors that of Carlos Barquin: Cuban exile, rebuilt from extremely humble roots, maximizing every single resource and talent. In Barquin’s 50 years as teacher, coach and now athletic director, Belen Jesuit has gone from a school with a 60-by-40-foot athletic field to a sprawling 33-acre campus with facilities and academics on par with the state’s best.

More importantly, he got the most out of every athlete he worked with. During a celebration of Barquin’s 50th anniversary at the school, Belen alum lauded him for his drive, integrity and care for his students. In honor of his 50 years, the school also created the Carlos Barquin Scholarship Fund to help young men attend Belen.

It’s fitting that Belen named the scholarship for a man who started at the school when most students needed scholarships. Francisco “Paco” Ruiz, class of 1973, was one of those students. He taught at Belen from 1976 to ‘81 and is the father of current cross-country coach Frankie Ruiz.

“Most of the kids from the school were on scholarship,” Ruiz said. “I’m telling you how much of a struggle it was for Barquin to start the (athletic) program: They told him he had to coach for free. He coached cross-country and track for free. He did it as if he was getting paid $10,000 a month. That was the enthusiasm he had.”

Barquin said basketball conditioning planted the seeds of a cross-country program that so far has won 11 state championships. He said the basketball coach at the time couldn’t have access to his athletes in the offseason, so he approached Barquin about starting a cross-country team.

“All they needed was tennis shoes, shorts and a shirt,” he said. “I could get them in shape for basketball. Those who are overweight will be fit.”

Businessman Carlos de la Cruz, class of 1981, said that Barquin and cross country share some similarities. For one, cross-country athletes have a simple goal —run as fast as you can. “What’s the minimum you need to compete, then put 100 percent of your heart into it — that’s what Barq is all about,” de la Cruz said.

Barquin and Belen Jesuit share a common birthplace, Cuba. Belen Jesuit started in 1854 as the Colegio de Belen in Havana by order of the queen of Spain, and reached 1,200 students before Belen alum Fidel Castro shut down all religious institutions in 1961. Jesuit priests who ran Belen came to Miami, and immediately re-opened the school at Gesu Parish. 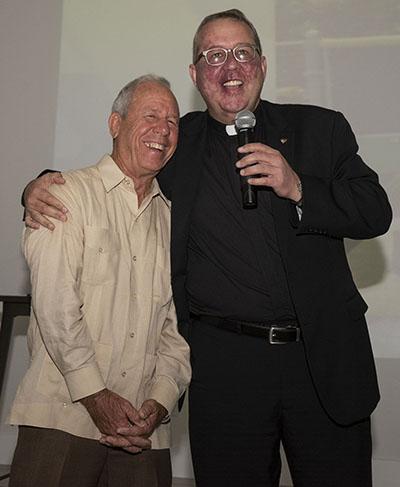 A few months later, in 1962, Barquin arrived in South Florida through Operation Pedro Pan. He was 13, from a small town in Cuba, and thinking he was going to a boarding school. He expected his parents would join him soon, but the Cuban Missile Crisis delayed their arrival.

After three months at the camp for unaccompanied minors in Florida City, he started to discover his vocation. He played every sport the intramural director offered. Realizing he had to keep busy, something else struck him.

“I made up my mind that I wanted to educate kids as a physical education director and coach, because it helped me, and I figured I could help others,” Barquin said.

He entered what was then Archbishop Curley High School as a sophomore and wrestled there while serving as a counselor at Florida City’s camp. There he met Jesuit Father Juan Ripoll, Belen class of 1936, who suggested Barquin apply for a physical education position at Belen.

He worked at Belen part-time while also retaining the counselor position at Florida City. As he poured the foundation of his career, he remembered lessons learned from Curley wrestling coach Jim Husk. “One of the reasons I do what I do is because of his leadership,” Barquin said. “He taught me how to walk.”

Walk quickly shifted to run at Belen. He started the cross country and track teams without a track. As he started other sports, he also had to overcome the lack of facilities at the school.

With space at a premium at Belen’s campus on Southwest Eighth Street and Seventh Avenue, Barquin trained his charges by running them from campus to Crandon Park in Key Biscayne, 7 miles away. Despite those humble beginnings, that team qualified for the state meet and finished top 10, the first of many such finishes. 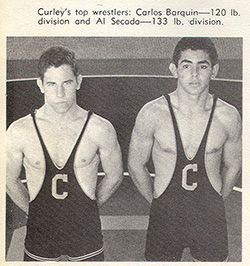 Belen athletic director Carlos Barquin said his days at Archbishop Curley High School in Miami, and his coach there, Jim Husk, convinced him that his vocation was "to educate kids as a physical education director and coach, because it helped me, and I figured I could help others." 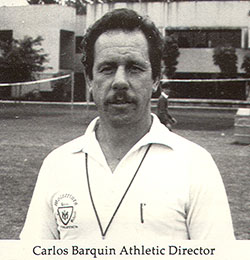 Belen Coach Carlos Barquin is seen here in a yearbook picture from the 1970s.

The track team also practiced at Crandon Park, with Barquin setting up a 400-yard track in the parking lot. He improvised a landing pit for pole vault, getting a sponge factory in Hialeah to donate sponges for the pit.

For the teams that practiced on campus, he adapted each sport into a version known as Barq Ball. On a field that de la Cruz likened to a “dust bowl,” he adapted the football rules to contain the game in the 60-by-40-foot field. “Anyone with a good arm would throw two times that field,” de la Cruz said. “Everything had to play on that short field.”

Barquin also taught life lessons, beginning with work ethic. Players on scholarship would clean the school to earn the scholarships, Francisco Ruiz said. De La Cruz also told of Barquin getting in a truck and having his athletes clear rocks off a field that eventually became a football field.

Finishing strong was the lesson that stuck with John Medina, class of 1977. For him, architect school at the University of Florida was hard, but Barquin’s cross-country workouts were harder. “Whenever I had any doubt of completing a course, I would always remember Barquin, who would chase me for the last half-mile with a little switch stick,” Medina said. “He would push me by saying, ‘You sprint at the end of the race, always.’ For years, he embedded that thought in my character. I would take strength in that.”

Barquin also cared for his athletes and students, even those who compete with Belen. Frankie Ruiz told a story about an opposing athlete falling down, and Barquin giving the athlete CPR. “He forgets the world and is focused on this kid,” Ruiz said. “He’s done that more than once.”

Javier Vento, who won the 2018 individual cross-country championship and led the Wolverines to their 11th state title, credited Barquin with saving his track season. He was battling tendinitis, but Barquin gave him swimming workouts to stay in shape. “I realized that he wouldn’t give up on me, wouldn’t give up on my season.”

In 1983, Barquin added athletic director to his duties as chair of the physical education department. It was a dream come true for him, and it’s when he really started to mold the Belen Jesuit program. He improvised a 1.7-mile cross-country trail using a tractor and a box scraper. He made that rock-filled football field playable. Eventually, he teamed with de la Cruz to build a new football stadium/track facility, and with Medina to build an aquatic center.

De la Cruz likened Belen’s journey to timing devices. When Belen needed a $40 stopwatch in the 1970s, he and the team chipped in $5 each to buy the stopwatch. “I remember all of us going to the store and buying the stopwatch. We felt like we’d bought a space rocket.”

Fast-forward 25-30 years, and Barquin is asking his former runners to chip in on a $10,000 fully automatic timing system. “The constant is that Barquin put the same effort into getting that $40 stopwatch as the $10,000 clock, and it meant the same for him,” de la Cruz said. 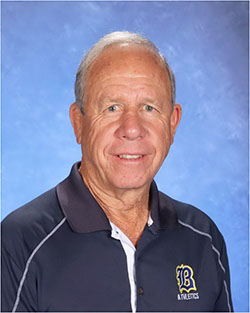 Belen Coach Carlos Barquin, seen here in a recent yearbook photo, says despite his 50 years on the job he has no plans to retire.

Barquin also used knowledge gleaned from his Florida City days to expand a program that now boasts 15 sports. He would give each coach the resources he needed, even if it was Barquin’s time as an assistant coach or as fill-in head coach. Some athletic directors who come from coaching a sport often favor that sport. Barquin went out of his way to give all his sports equal support. He can be seen at nearly every game. This especially showed in his commitment to represent sports that were coached by off-campus staff in school meetings.

To do so, he had to give up coaching cross country, track and wrestling, though he still assists them. He turned to two Belen alumni to run each program. Victor Arrieta, a 1995 alum who also serves as assistant athletic director in charge of compliance, took over the track team. Arrieta coaches the middle- and long-distance runners, while Barquin helps with the field events.

His cross-country team went to an eighth-runner off Barquin’s only state-championship team. Frankie Ruiz, son of Paco Ruiz, has known Barquin since he was a 5-year-old attending Belen’s legendary running camps. The younger Ruiz worked up through the assistant ranks before taking over the team in 2004, then proceeded to win 10 state championships. He considered it a high honor to take over a team that qualified for state nearly 30 years.

For Barquin, lessons learned from athletics feed Belen’s primary mission of academics and Catholic faith. He said academics have always been the priority of the administration but athletics support the primary mission, teaching athletes work ethic, sacrifice, teamwork, camaraderie and toughness. He calls athletics an extension of the classroom, a “lab of life.”

Medina can attest to that. He said Barquin’s example embedded itself so deeply that he couldn’t help but teach it to his son and daughter. His son, a 2013 Belen Jesuit grad, played football, track and basketball and is on his way to medical school. His daughter excelled in soccer at Palmer Trinity before playing four years of soccer at Wake Forest. She is headed to law school. 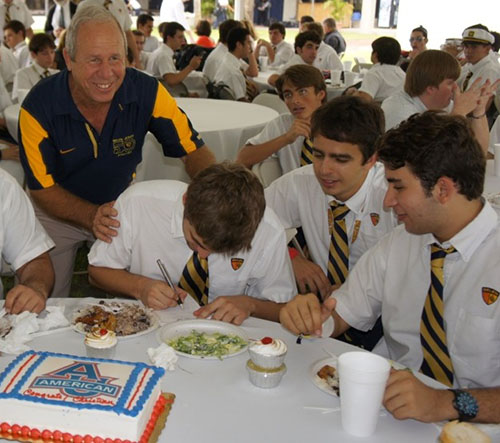 Belen Coach Carlos Barquin is seen here in a recent picture having some fun with his student athletes.

“I gave him a photograph of my kids in their jerseys, and said they had a little bit of him in them,” Medina said. “They have that same type of courage in competing. Barquin had a lot to do with my life, and I passed it on to my children.”

Barquin said faith and family have carried him through this journey. He tries to follow Jesus’ example as a leader of men. He said prayer helps him handle the challenges of life. He lauded his wife, Romy, an elementary school teacher who died five years ago, for supporting him despite being gone for long hours.

At age 71, however, Barquin has no plans to stop. He still works 11.5 months out of the year. His plan is to take each year at a time and stay as long as he can contribute.

“The kids keep me busy,” he said. “They give me something to look forward to. If you don’t move, the train runs you over. I need to keep moving.”