Tell them that the Father is waiting 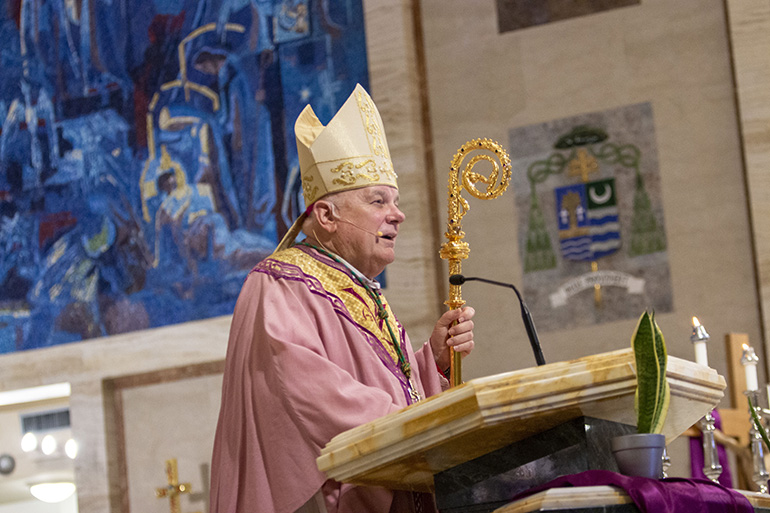 Archbishop Thomas Wenski preaches at the Mass he celebrated March 26, 2022, the Fourth Sunday of Lent, at St. Mary Cathedral with about 100 parish representatives for the global 2021-23 Synod. They had gathered for an assembly summarizing the feedback gathered during the listening sessions at the churches and archdiocesan entities during the past few months.

Archbishop Thomas Wenski preached this homily during a Mass at the conclusion of an assembly with archdiocesan Synod leaders, part of the “journeying together” called for by Pope Francis, which is taking place all over the world between 2021 and 2023. The Mass was celebrated at St. Mary Cathedral March 26, 2022, the Fourth Sunday of Lent.

In the parable, the younger son asks for his share of his inheritance. In doing so, this young man is treating his father as if he were already dead. He wants what is coming to him now — instead of waiting until after his father dies. Like, how cold is that?

Today, we live in a world in which God has been exiled, pushed aside — as it were — to the margins of our lives. Perhaps we don’t hear many people saying that God is dead although at one time, not too long ago, it was fashionable in many circles to say so. But today, we live — or many of us live — as if he didn’t matter, which is tantamount to the same thing. And what happens to us when we live our lives, when we organize our society as if God doesn’t matter finds its parallel to what happened to the younger son who wasted his inheritance in a life of dissipation.

Pope Benedict — our Pope emeritus — described this situation very accurately during his visit to Cuba some years ago. In Santiago de Cuba, he said: “... when God is put aside, the world becomes an inhospitable place for man, and frustrates creation’s true vocation to be a space for the covenant, for the ‘Yes’ to the love between God and humanity who responds to him.”

From that “inhospitable place” which was the pigsty where the younger son ended up, he finally comes to his senses, he becomes “homesick” — and makes his return to his father’s house. Despite his depravity, he retains the memory of his Father’s goodness. But, as we saw in the parable, the reality of the Father’s goodness far exceeded what the son remembered of that goodness. Even before he gets to the Father’s House his Father rushes out to greet him and he smothers him with kisses and embraces. The Father whom he had treated as if he were already dead rejoices that the son who “was dead has come back to life, who was lost has now been found.”

Who among us can say that we too have not been surprised by God’s goodness? Of course, sometimes, we are hard pressed to understand the ways in which God surprises us. The younger son who expected no more than to be treated as a hired hand by his Father is surprised at his Father’s magnanimity; but so is the elder son surprised — and none too pleased by his Father’s generous forgiveness of his wayward brother. I am sure that not a few of us can readily identify with the anger of the elder son. After all, the Father, in killing the fattened calf and giving his younger son a new robe and ring, is spending what would be by rights the elder son’s inheritance.

But God’s ways are not our ways — and God’s generosity cannot be measured by human standards. The economy of God’s grace is not a zero-sum game — God’s forgiveness given freely to me doesn’t mean that there will be less for you.

Today we all know of those who give God the cold shoulder, or who are angry with God, or for any number of reasons choose to live in alienation and distance from God. We all know people who have lost their way. Statistics tell us that young people are leaving the Church in droves. Some go away angry; but I suspect many just drift away — not angry but indifferent. “Whatever...” they might say. But given how our world is increasingly an “inhospitable place,” many young people never even learned the way. The need for effective youth ministry was a constant theme of our listening sessions. Youth ministry today must reach out to both groups: those who are disaffiliated from the Church and those who were never affiliated — while at the same time, take care of those who like that elder brother are always with us.

In any case, those who are still out there in that “inhospitable place,” which is in that world in which God doesn’t matter, need to hear the Good News that God loves them anyway, that he hasn’t forgotten them, that he is waiting for them to begin again by coming to him here at the Eucharistic banquet. No matter how far they come from, not matter how great the distance they have placed between themselves and God, if he sees them coming back home, he will rush out, throw his arms around them, embrace them, and bring them back into his House.

You too, having encountered Christ in his Word and Sacrament, are also called to be missionaries of hope — you must go out to those who continue to stand “on the outs” with God. They live in a world that is cynical, bitter, and seemingly without hope; but you have a message to share, a powerful message that their cynicism, their bitterness, their hopelessness is only symptomatic of a deeper “homesickness” — a “homesickness” that can be easily cured by a “coming to one’s senses” and returning to the Father’s house. Tell them that the Father is waiting; no, better yet, tell them to look up and see the Father rushing down the road to meet them.