The soon-to-be-ordained priests listen to Archbishop Thomas Wenski's homily. The archbishop ordained eight new priests for the Archdiocese of Miami in a moving ceremony May 8, 2021. The ordination took place at St. Thomas University's Fernandez Family Center in order to accommodate the nearly 800 in attendance while adhering to pandemic safety protocols.

Archbishop Thomas Wenski preached this homily at the ordination of eight new priests for the Archdiocese of Miami, May 8, 2021. The ceremony was held at St. Thomas University’s Fernandez Family Center to accommodate nearly 800 guests while complying with social distancing guidelines.

Today is a day of great joy – for these eight men, for their parents, families and friends, and indeed for the entire People of God here in South Florida. Last night I prayed Vespers with these men and blessed their chalices at St. Mary’s Cathedral; but to assure the participation of more people in this important milestone in the life of this local Church, the ordination is taking place here at St. Thomas University, an institution sponsored by the Archdiocese of Miami.

The Gospel reading – the reading for this fifth Saturday in the Easter Season – is rather sobering. I am reminded of the words of the mother of St. John Bosco on the day of his ordination to the priesthood. Though illiterate, she possessed great faith and wisdom. She told him: “Giovanni, today you are a priest. You will begin saying Mass so from henceforth you will be closer to Jesus. Remember that to begin to celebrate Mass means also to begin to suffer. You will not realize this immediately but little by little you will see that what your mother told you is the truth.” 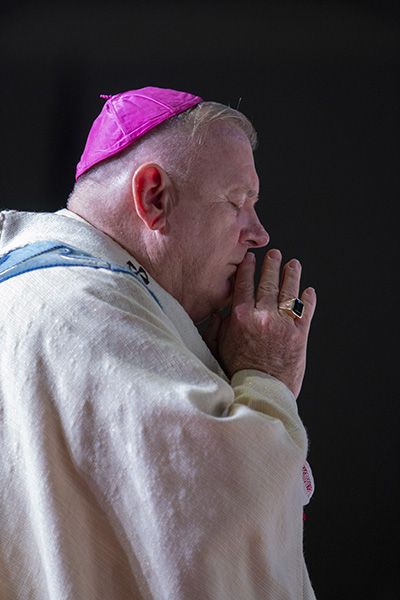 Archbishop Thomas Wenski prays during the Litany of the Saints, before ordaining eight new priests for the Archdiocese of Miami in a moving ceremony May 8, 2021. The ordination took place at St. Thomas University's Fernandez Family Center in order to accommodate the nearly 800 in attendance while adhering to pandemic safety protocols.

A priestly vocation, in the words of Pope St. John Paul II, is both a “gift and a mystery.” To embrace the gift and to enter into the mystery which enables the priest, in communion with Jesus to act in his name and in his sight, as a shepherd of souls, is a step not to be taken lightly. Since the priest offers the Holy Sacrifice every day, sacrifice must also be the condition of his life. In giving Christ’s Body and Blood, we must also give our body and blood for the life of our people.

When Jesus first sent out his apostles, he told them: “Proclaim the Kingdom of God... Cure the sick, raise the dead, cleanse lepers, drive out demons.” Quite a job description for them – and for us!

As Jesus’ heart was moved with pity for the troubled and the abandoned, those who seem like sheep without a shepherd, so too should a priest’s heart be moved. Pastoral charity – and not the desire for fame or fortune – should motivate the priest in his ministry. A priest is to “cure the sick”; that is, to attend to the ill and the injured, healing their isolation with a visit and bringing courage to those who are weak; a priest is to raise the dead, that is, to restore hope to those deadened by discouragement and defeat; a priest is to cleanse lepers, that is to befriend the outsider, to extend the hand of friendship to the marginalized and rejected; a priest is to drive out demons, by helping people deal with the various addictions that affect them – and by not failing to address any personal demons that may threaten the integrity of his commitment.

In an increasingly secularized world where many have lost the sense of the transcendent, the priest is an enigma, a sign of great contradiction. Today, many view religious faith with hostility or, at best, with indifference. In a secularized world that pretends it can live as if God does not mater, the Church will always seem “out of step” and irrelevant. Such a Church will often be regarded if not with scorn and ridicule then with utter incomprehension. As Jesus reminds us in today’s Gospel, “If the world hates you, realize that it has hated me first.” As Pope Benedict XVI observed: “...we priests experience this: the ‘world’ does not understand the Christian, does not understand the ministers of the Gospel. Somewhat because it does not know God, and somewhat because it does not want to know him. The world does not want to know God so as not to be disturbed by his will, and therefore it does not want to listen to his ministers....”

Yet, by Christ’s design, though we do not belong to the world, we are "in" the world "for the life of the world." This call of the Church to be “in the world” and to be “for the life of the world” has been strongly emphasized by Pope Francis. He has criticized a “self-referential Church,” a Church closed in on herself. A priest, Pope Francis tells us, is not to build walls but bridges. And he has challenged all of us to “go out of the sacristies and go out to the ‘outskirts’” where people of faith are most exposed to the onslaught of those who want to tear down their faith. Pope Francis continually reminds us that the priestly anointing we receive is not meant to just make us fragrant; rather, it is meant “for the poor, the prisoners, the sick, for those sorrowing and alone.”

The world desperately needs the priest’s witness that God in fact does matter. This witness is made more compelling by a priest’s detachment from material comforts and signs of status, by his readiness to be obediently available to go wherever his bishop may send him, and by his chaste celibacy which is the source of spiritual fecundity. This is what Pope Francis would call being a priest who goes out of himself and lives like a shepherd with the “odor of the sheep.”

The celibacy which is freely embraced by the priest affirms and proclaims that all human intimacy finds its deepest meaning and fulfillment when experienced as a participation in intimacy with God himself. Understood in this way, celibacy in no way contradicts the dignity of marriage but presupposes and confirms it. (cf. Familaris Consortio, 16). Celibacy, to be sure, is not easy; but then again neither is Christian marriage easy, for both require the gift of oneself in imitation of Christ’s own gift of himself on the Cross.

As priests, you will forgive sins in the name of Christ and the Church in the sacrament of penance. Be generous of your time, in making this sacrament available to your people. And do not neglect to avail yourself of its consolations. For the demands of the ministry with its inevitable trials and disappointments, and the fact that we carry the “treasure” of the Gospel in “earthen vessels,” can sometimes tempt us priests to give into discouragement — and, perhaps, sometimes even to try the patience of our people. But frequent confession will not only keep you humbly aware of your own unworthiness but will also constantly remind you of the primacy of grace: God uses imperfect instruments to work his will so that we know that it is He who saves and not we. And the Mercy of God will always be greater than our own weakness and unworthiness.

And in welcoming these new brothers into our priestly fraternity, we – bishops and priests – grow in an even greater appreciation of all that God has done through us – despite our admitted shortcomings. Inspired by the generosity of these eight men, we also renew our commitment to our vocation to follow Christ, the source of our hope, the hope that does not disappoint (Rom. 5:5) 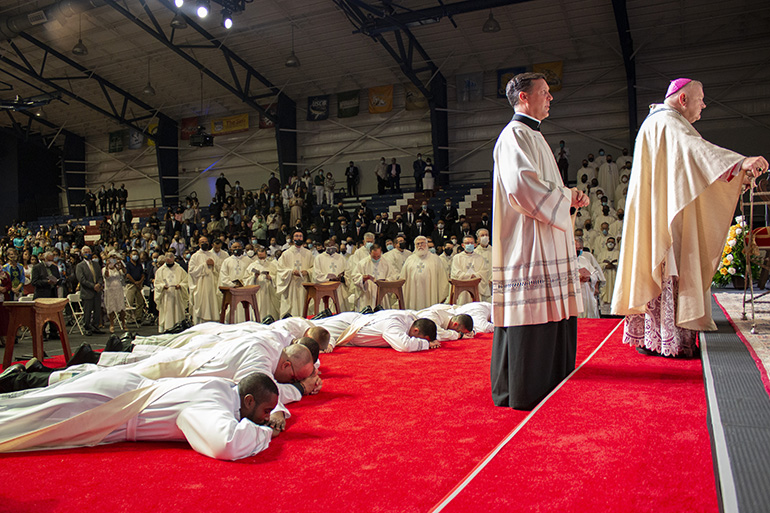 The soon-to-be-ordained priests lie prostrate on the sanctuary as Archbishop Thomas Wenski and the congregation pray the Litany of the Saints. The archbishop ordained eight new priests for the Archdiocese of Miami in a moving ceremony May 8, 2021. The ordination took place at St. Thomas University's Fernandez Family Center in order to accommodate the nearly 800 in attendance while adhering to pandemic safety protocols.

Maria Maguire - 05/13/2021 12:33 PM
Dear Archbishop Wenski, Your homily last Saturday at the Ordination of 8 new priest for our Archdiocese sounded as if the same Christ, in his revolutionary approach to the "idea" of God 2,000 years ago, was directly talking to present-day listeners through you. It was the Holy Spirit who so powerfully refreshed the faith of those who, like me, attentively closed our eyes and let the occasion confirm once more the presence of the Almighty GOD in a God-indifferent or God-denying world. Thank you, Archbishop, for your constant attention to the needs of the Church in the area where you have been chosen to guide/shepherd. Keep up the good work. As you know, many are praying for you. My prayers and the prayers of thousands are with the newly ordained, their families, all the priests in the South Florida area and the entire world, from the Pope down! The Body of Christ is living a tough reality in today's world and the enemy is working tirelessly to weaken and destroy it. BUT, the one who lives in us is much stronger and in the end, JESUS WINS! Our Lord PAID THE PRICE ON THE CROSS and His presence in the Eucharist will be the weapon which makes us joyfully invincible. As you said, these new priests will continue the loving, healing, and forgiving mission of Christ, what a JOB! May the Lord bless them always for answering the call. GLORY AND PRAISE TO OUR GOD!