To honor their memory, we too must resolve to serve our country

Archbishop Thomas Wenski preached this homily while celebrating Mass on Memorial Day, May 31, 2021, at Our Lady of Guadalupe Church in Doral. The Mass was organized by Catholic Cemeteries of the Archdiocese of Miami to honor military families who have lost a veteran this year, and any veteran who has lost a family member.

Today we gather at Our Lady of Guadalupe Church in Doral, adjacent to one of our two archdiocesan cemeteries, Our Lady of Mercy. The other in North Lauderdale is Mary, Queen of Heaven. Normally we would celebrate Mass at each of these cemeteries for Memorial Day – but, since March of last year, we have not been living in normal times. As we continue to observe social distancing because of the pandemic, we have this one Mass today in this spacious church and we are livestreaming the Mass to all who wish to honor and pray for their departed loved ones. And, since today is Memorial Day, we pray for all the dead but especially for those who have made the supreme sacrifice, those who have died in the service of this great nation. 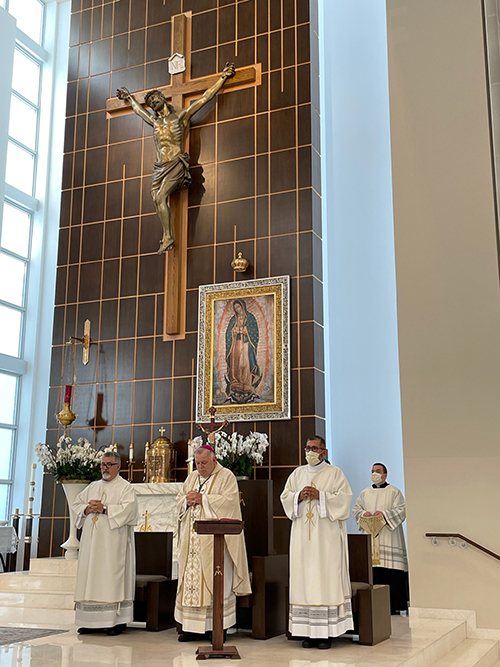 Archbishop Thomas Wenski celebrates Memorial Day Mass at Our Lady of Guadalupe Church in Doral, May 31, 2021.

Memorial Day was originally known as Decoration Day – and I remember that my mother always called it that. It was established to honor those fallen in battle during our nation’s Civil War. However, today Memorial Day honors those who have died not only in the far distant past; today, we honor not only our grandfathers and fathers who died in wars fought yesterday; today we also honor our sons and daughters, our brothers and sisters who have died in more recent wars including our nation’s longest war in Afghanistan where American soldiers still stand in harm’s way.

We owe these fallen heroes – and the families who mourn them – our gratitude for their sacrifice and our prayers for their eternal repose. Their sacrifice won the peace that allowed our great nation to grow and prosper.

Saint John XXIII in Pacem in Terris (Peace on Earth), wrote that peace is an edifice resting on four pillars: Truth, Justice, Love and Freedom.

These pillars – truth, justice, love and freedom – are being increasingly undermined today by relativism, individualism and by old godless ideologies dressed up in new seductive clothing.

Truth must be the basis of our lives: the truth of God, the truth of the moral law written on the human heart. Without commitment to those self-evident truths placed in our nature by God, we will be enslaved by what Pope Benedict called the dictatorship of relativism and Pope Francis called “ideological colonialism.” We must embrace the truth of who we are as creatures made in the image and likeness of God.

Justice commits us to respect the dignity and rights of every human person – from conception till natural death. Justice commits us to the rule of law – but a law that is just and in conformity with the truth about the human person and not merely the imposition of the will of the powerful on those who are weak and vulnerable. Justice tells us that “might” does not make “right.”

Love is the capacity to transcend oneself, to make a gift of oneself to another. We must make our families once again the schools where such love is taught and experienced and the gift of self is made possible, where children learn such love from parents – from mothers and fathers who are committed to each other in that stable and permanent relationship called marriage. 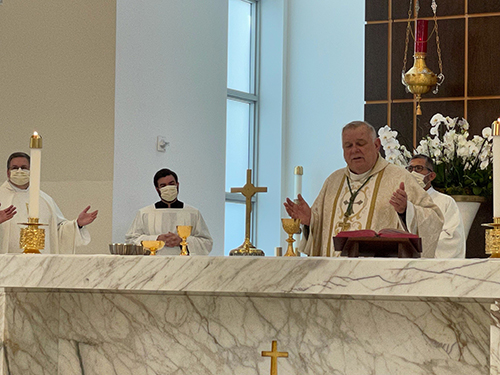 Archbishop Thomas Wenski celebrates Memorial Day Mass at Our Lady of Guadalupe Church in Doral, May 31, 2021.

Freedom is not the ability do as we please but to do as we ought. It means that we can and do assume responsibility for our actions, to do good and not to do evil.

“...(the) great task remaining before us...that from these honored dead we take increased devotion to that cause for which they gave the last full measure of devotion; that we here highly resolve that these dead shall not have died in vain; that this nation, under God, shall have a new birth of freedom; and that government of the people, by the people, for the people, shall not perish from the earth.”

Yes, to recall to our memory those who have died in war means also to commit ourselves to the cause for which they died. To honor their memory, we too must also be resolved to serve our country, to safeguard its promise, to accept responsibility for its destiny – “that these dead shall not have died in vain.” This we do through assuming the responsibilities of good citizenship, by voting responsibly and paying our taxes; we do through putting the common good ahead of private self-interest and in “giving back” through volunteer service.

As Americans, we honor the sacrifice of those who died in the service of our nation by building on these pillars of truth, justice, love and freedom the peace which their sacrifice has won for us. As Jesus tells us, blessed are the peacemakers for they shall be called the children of God.

May the souls of all the faithful departed, especially those fallen in the service of this great nation, through the mercy of God, rest in peace. Amen. 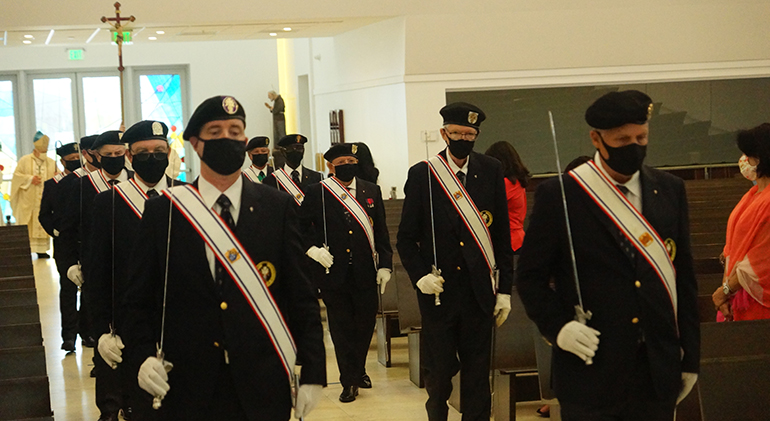 Knights of Columbus provide an honor guard at the start of the Memorial Day Mass celebrated by Archbishop Thomas Wenski at Our Lady of Guadalupe Church in Doral, May 31, 2021.