May we see Christ in the migrant 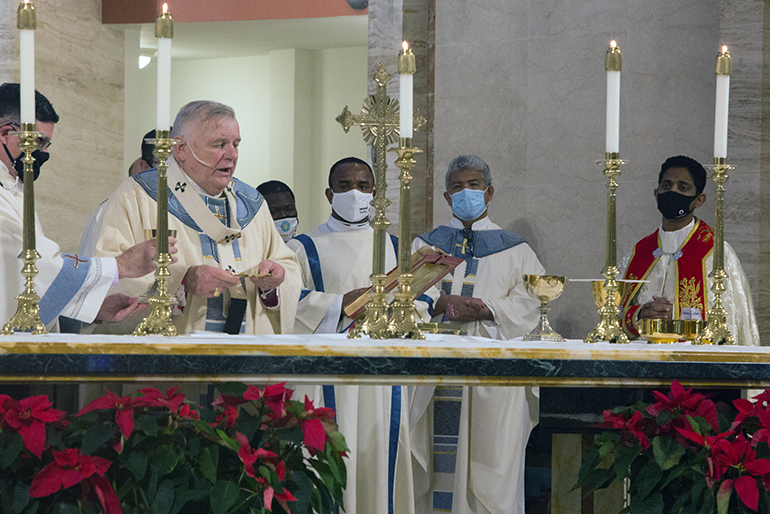 Archbishop Thomas Wenski celebrates the annual Migration Mass on the feast of the Epiphany, Jan. 3, 2021. Also taking part are transitional Deacon Franklyn Ekezie of Nigeria, FatherJesus "Jets" Medina, a native of the Philippines, administrator of St. Peter in Big Pine Key and director of the Ministry to Cultural Groups, and Father Thomas Pulickal of India, assistant vicar at Our Lady of Health Syro-Malabar Catholic Church in Coral Springs.

Archbishop Thomas Wenski preached this homily at the annual Migration Mass, celebrated on the feast of the Epiphany, Jan. 3, 2021, at St. Mary Cathedral in Miami. Click here for a slideshow of images from the Mass.

Today, we celebrate the Epiphany of our Lord which recalls how the Child Jesus was revealed or “manifested” as the Savior of all nations. And so, it is appropriate that today we welcome to the cathedral members of the various national and ethnic groups present in our archdiocese. Our national motto, “e pluribus unum” – out of many one – pays tribute to our immigrant roots. For, despite our varied origins – we trace our ancestry from all the continents of the world – and despite our partisan or political differences, we are still “one nation under God with liberty and justice of all.” And while we acknowledge that we have a ways to go in assuring that the America dream of freedom and opportunity is accessible to all who live in our country, as Americans we should be committed to work for that “more perfect union” the founders envisioned for this great nation that has been a beacon of hope for so many.

In recent months, we have seen much anger in our society. And much of that anger seen in our streets and expressed in social media really revolves around the argument over “who belongs.” And so, we hear warring slogans: “Black lives matter,” “Blue lives matter,” “All lives matter,” and from those who identify as pro-life, “Unborn lives matter.” And they all do matter – but beneath these slogans there is an argument about “Who truly belongs to our society?” And, “who is shut out?”

A sense of belonging – of being attached to particular people and places – gives shape to our identity and provides security in which to grow. As human beings we long to belong – to a family, to a community, and to a nation.

As we reflect on the immigrant experience, we can draw a parallel to Jesus’ coming among us as man and a newcomer’s arrival in a strange land. In this perhaps, our reflection will help us contemplate the face of Jesus in the visage of the immigrant.

For if we can call Jesus the King of Kings, we also can call him the Migrant of Migrants. Like the immigrant who arrives to our land, the Eternal Son of God through his Incarnation pitched his tent in our midst. And like Jesus who was born in a stable because there was no room for him in the inn, today, even while they toil at jobs that Americans cannot or will not do, immigrants too often hear again what Mary and Joseph heard in Bethlehem two millennia ago: there is no room in the inn for you.

Like many of you here today, Jesus too was a refugee, a political refugee forced to flee from the despotic tyranny of King Herod. And today, thousands of refugees remain in refugee camps throughout the world, yet our country has admitted in recent years very few refugees. Many Americans, most of whom are only a generation or two removed from the immigrant themselves, have become suspicious or frightened of the newcomer in their midst. Such fears have produced confusion and bitterness which has been exploited by both parties resulting in the demonization of immigrants, especially irregular immigrants who are seen then as threats, and not as our brothers and sisters, or even among the “least” of his brothers and sisters.

The Magi came to Bethlehem, “going into the house they saw the child with Mary his Mother, and they fell down and worshipped him” (Mt 2: 11). These mysterious wise men symbolize the nations beyond Israel. Jesus came to save them as well – and not just the Jews.

But today, the feast of the Epiphany reminds us that in Christ the nations have been reconciled. So, to the question, “who belongs,” the Gospel answers: Everybody does. As the hymn we sometimes sing frames it: “In Christ, there is no east or west, no south or north but one great fellowship of love throughout the whole wide earth.”

Epiphany, thus, reminds us that God’s offer of salvation in Jesus Christ is “catholic”. “Catholic” of course comes from the Greek word meaning universal. And if God’s salvation is universal or “catholic,” then the Church which is the Sacrament of Salvation in the world must also be “catholic” – catholic not only because of the fullness of her doctrine, faithful to the totality of God’s revelation in Jesus Christ – but catholic in its make-up. Certainly, this local Church of Miami is “catholic” – and from many nations and ethnicities we are one in Christ Jesus.

“Going into the house they saw the child with Mary his Mother...” This “going into the house” where the Magi encountered Jesus in some sense represents the Church. In order to find the Savior, one has to enter the house, which is the Church – “one great fellowship of love throughout the whole wide earth.”

We are one family, one community – brothers and sisters of one Father – not through flesh and blood but through water and the Holy Spirit. As a Catholic people made up of many ethnicities and nationalities, speaking different languages with different cultures, we are one in Christ – and in Christ, we recognize that through our diversity we can enrich each other. For in the Body of Christ, diversity does not divide us – only sin can divide us; but Christ is stronger than sin.

The mysterious star led the Magi to the Christ Child. Certainly, they must have been surprised by what they found at the end of their journey. We can be sure this new King to whom they now paid homage was not what they expected. Remember they first went to Jerusalem, to King Herod. They, like we, had to learn that God is not as we usually imagine him to be.

The light of the star led them not to the rich palaces of Jerusalem but to a humble hovel in Bethlehem. There the light of the star was replaced with the light of faith so that they might recognize in the Baby in his Mother’s arm the Promised King for whom they had searched. Surprised by God, they had to change their ideas – about power, about God, about man. They had to change themselves. Their encounter with Christ called them to conversion. This conversion is symbolized by their returning home “a different way.”

If Catholics are to be a light to the nations, then we must model what a reconciled world looks like to us. We have to show that diversity enriches the Church and does not divide her — for our communion in Christ is greater than anything that could ever divide us.

In a world of broken promises and fragile hopes, may our Church, in her wonderful diversity of cultures and languages, be always a beacon of hope, a light to the world. By modeling what a reconciled world could look like, we can — with the help of God’s grace — show those whom globalization has made neighbors how to live as brothers and sisters. And as a community of faith living in America, we will continue to contribute to the “common good” by advancing our proposals for just, fair and equitable immigration policies.

“In Christ now met both east and west, in him meet south and north. All Christly souls are joined as one through the whole wide earth.”

May the Star of Bethlehem, which guided the Magi on their journey and sustained their hope, be always the point of reference to help all peoples find their way to Christ.