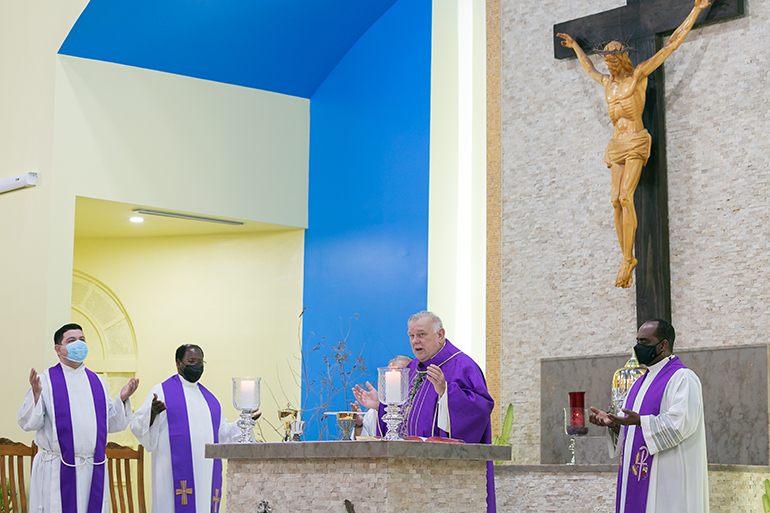 Archbishop Thomas Wenski preached this homily during a Mass marking the 90th anniversary of Catholic Charities of the Archdiocese of Miami. The Mass was celebrated March 26, 2021, at St. Joachim Church in southern Miami-Dade County.

“(They) picked up rocks to stone Jesus.” These words from the Gospel today remind us that Jesus’ hour is fast approaching. In fact, the incident recounted in today’s Gospel reading is Jesus’ last public act before his triumphant entry in Jerusalem on Palm Sunday. They picked up rocks to stone Jesus. This reminds me of a Haitian proverb: Si pye mango pa te bay mango li pa ta pran kout wòch. Roughly translated, if the mango tree did give mangos, they wouldn’t throw rocks at it. 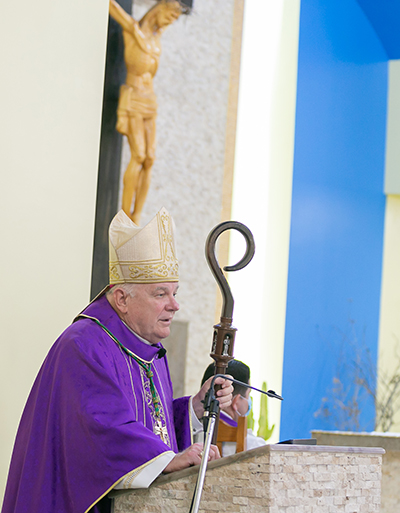 Bad times did not become worse times thanks to the charity of faith, a Catholic faith that proclaims the dignity of the human person created in the image and likeness of God. And Catholic Charities does so without proselytizing: We don’t help people because they are Catholic but because we are Catholic. 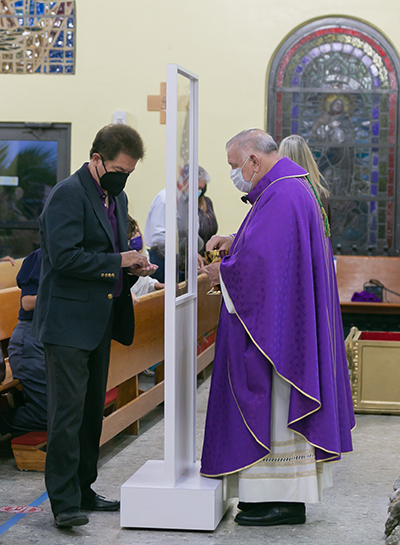 Archbishop Joseph Hurley was bishop of St. Augustine — when the Diocese of St. Augustine covered almost the entire state of Florida. He used to say that the Church should do good — and, as the Gospel saying goes, a light should not be hidden under a bushel basket — so he would also add: The Church should be seen as doing good. God’s love for all his creatures must be mirrored in the way we care for one another — through acts of love and solidarity that are grounded in the truth that every human life is sacred and that all humanity forms one family.

Too often it seems that the good work of Catholic Charities of the Archdiocese of Miami is a well-guarded secret. And sometimes it is misunderstood, as I said, for Catholic Charities does not proselytize. We help people not because they are Catholic, but because we are.

That’s why it is good that we “toot” our own horn tonight. We need to tell our story: because Catholic Charities certainly does good — and in doing the good that you do, you make the Church look good. And that’s important too.

And while over these 90 years the organization has had many names – from Catholic Welfare Bureau, Catholic Community Services, etc. to Catholic Charities of the Archdiocese of Miami, as we call it today, remains the institutional expression of our Church’s solidarity with the world of pain and need.

Today, we give thanks to the Lord for the witness of Catholic Charities here in this community for 90 years. And we make the words of Jeremiah from tonight’s first reading our own:

Sing to the LORD,
praise the LORD,
For he has rescued the life of the poor
from the power of the wicked!