We cannot deny the sin of racism or its serious consequences

Archbishop Wenski's homily at Mass for Unity Against Racism

Archbishop Thomas Wenski preached this homily during a Mass for Unity Against Racism, celebrated July 5, 2020, at Holy Redeemer Church in Miami. The Mass was livestreamed on the church's Facebook page. See video above.

This Fourth of July Weekend is a “graced” opportunity to highlight the Church’s social teachings – an opportunity given current events we should not allow to pass. The 4th of July celebrates America’s Independence after a war in which white and black Americans fought and died. Yet, as Frederick Douglas said in the 1850’s: “What is the 4th of July to the American slave? I am not included under the pale of this glorious celebration. The 4th of July is yours not mine.” However, after the Civil War and with Emancipation, he embraced the celebration – and in the states of the former Confederacy free blacks made the 4th of July a celebration of Black Freedom. But Jim Crow would soon enough tamp down those kinds of celebrations. 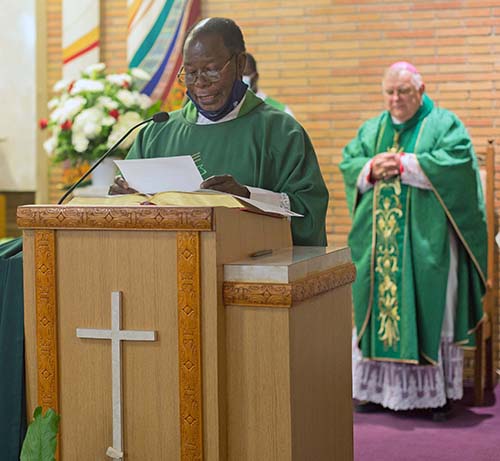 Spiritan Father Alexander Ekechukwu, Holy Redeemer's pastor, greets the congregation at the start of the Mass for unity against racism and for peace, July 5, 2020. Archbishop Thomas Wesnki, standing behind him, presided.

And so, Dr. Martin Luther King, Jr. would describe the Declaration of Independence as a “promissory note of liberty and justice for all," a note stamped with the words “insufficient funds." But Dr. King’s Civil Rights movement touched the conscience of America and ended “Jim Crow." However, the killing of George Floyd has pulled off the scab on a still festering wound in our nation, the wound of racism. The continued unrest in our cities since the killing of George Floyd reminds us that this “promissory note” is not yet fully redeemed.

Yes, the body politic still bears the festering wounds of racism, the original sin of our founding. Dr. King in his last book, published before his assassination, famously asked: “Where do we go from here: chaos or community?” Today, on the 244th anniversary of its Independence, America faces a triple crisis: a global pandemic, an economic catastrophe, and ongoing social unrest in many of our cities.

Despite our nation’s partisan divisions, we will have to come together on common ground to address this triple crisis. Chaos is not an option if we are to address this triple crisis as well advancing needed reforms in the area of immigration, health care, education, social and economic inequality as well as fixing what is broken in our system of justice that is still far from being “color blind."

That’s why on this Independence Day weekend, we gather to pray for justice, to stand as a community of faith for unity against racism because chaos is not an option if we seek to hasten that day “when people will not be judged by the color of their skin but by the content of their character."

AA (alcoholics anonymous), has a saying: Denial is not just a river in Egypt. Rather, it is an obstacle that the alcoholic must stay aware of if he is to maintain sobriety because extreme denial is often a characteristic of those struggling with the disease of alcoholism. Well, America for far too long has been in denial, often “extreme denial” about racism.

We cannot deny the sin of racism or the seriousness of its consequences not only in minds and attitudes of individual people but also in the social structures and legal framework of the societies people build. We are to love our neighbor – and even our enemies. Such love is not just an empty or shallow sentimentality. True love must always be “love in truth." Enabling denial is not to love in truth. If you ever had to deal with someone struggling with addiction, you know you do them no favors if you enable their denial. Denial about his addiction only creates more chaos in the life of an alcoholic; denial about the sin of racism creates chaos in our society; it is an obstacle that must be overcome if we bend the arc towards justice and build communities of peace and hope. 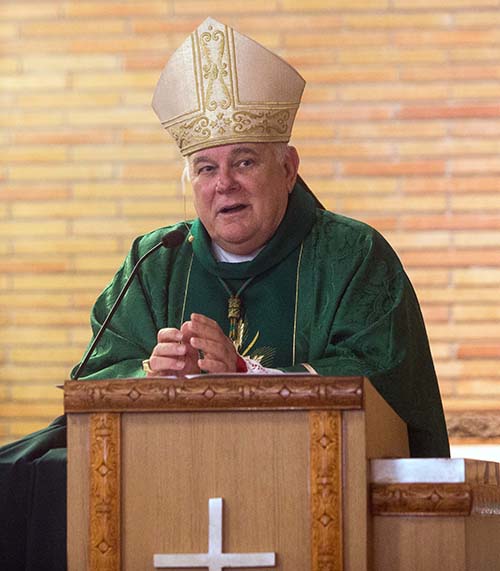 Archbishop Thomas Wenski preaches his homily during the Mass for unity against racism and for peace, which he celebrated July 5, 2020, at Holy Redeemer Church in Liberty City.

Jesus in the Gospel reading today tells us: "Take my yoke upon you and learn from me and you will find rest...My yoke is easy and my burden light." The Scripture commentators remind us that those who listened to Jesus understood the image here. Farmers would yoke together a stronger, more experienced ox, with a younger and inexperienced one – so that the stronger would teach the weaker. Jesus invites us to "yoke" ourselves to him for he understands the weakness of our fallen human nature. His yoke is lighter – not because he demands less of us but because he bears more of the load for us. In that sense, being a Christian is not a burden – as some would believe – but a gift. A gift that brings us joy even in adversity.

Racism is a sin. It says so in the catechism – which also lists a whole lot of other sins. Some people don’t want to hear about the sin of racism – just as there are other people that don’t want to hear about sins of fornication, or sodomy, or theft or even gossip. But, you know, Jesus loves sinners, all of us. This parish is called Holy Redeemer because Jesus died on the cross to redeem us from our sins.

Yes, Jesus loves sinners – but not with a sentimental or saccharine kind of love that would enable denial; but with a love that is love in truth, a love that love is stronger than sin. Love names the sin not to damn the sinner but to call the sinner to conversion of heart and mind. For the love that opened its arms on a cross of wood is love that believes that the sinner can be redeemed.

This why we must not despair of America. We love America – but let’s love her “in truth” and not just with a sentimental love – a kind of love that would enable denial and foment unrest and chaos instead of community and the “rest," the redemption, that Jesus promises if we love in truth.

Dr. Martin Luther King, Jr., like the Old Testament prophets, refused to remain silent in the face of evil. And, he understood that evil would not be conquered by more evil. Returning evil for evil cannot make the world better. “An eye for an eye” ethic would leave everybody blind. He opposed the evils of segregation and racial prejudice through non-violent action. With courage and great sacrifice, he helped make America better. This Baptist preacher with courageous words and deeds touched the conscience of America and in ending “Jim Crow” he ultimately made America stronger. His example and his faith should inspire and guide us today as we face new challenges and new evils. We can never allow ourselves to give in, or to give up

But even as we acknowledge how far yet we must go before the promissory note of liberty and justice for all is fully redeemed, Americans of all races should take holy pride in how far we have come. As one preacher said, We ain’t what we oughta be and we ain’t what we’re gonna be; but thank God almighty, we ain’t what we used to be.

Other News from Holy Redeemer Church