We are more than worms; we are butterflies

On Easter Sunday morning, I celebrated Mass with some 50 unaccompanied minors in the care of our Catholic Charities. They are among the tens of thousands who have made the trek from Central America through Mexico to our southern border. These kids are in their early teens — so I thought I would use a parable to speak about the meaning of Jesus’ resurrection. A few people suggested that this parable would make a good column since we still are in the Easter season. 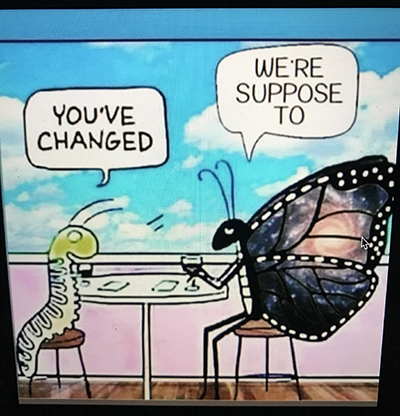 Once upon a time there was a little worm named Pancho. And Pancho didn't like anything about his life as a worm. Well, you see, the life of a worm is not "life," since a worm spends its days in the mud and with great fear, because it does not know when a bird will pounce on it to eat it. Pancho understood that he had been born for something more than a worm’s life. And he looked at the butterflies, with their pretty wings that carry them up out of the mud. Butterflies are free — they can go where they want. And so, he dreamed that one day he could be like the butterflies.

Pancho's little friends made fun of his desire to be like the butterflies. They said to him: Pancho, forget about it, you are a worm and you will die a worm. One of his friends told him: If you want, I'll buy you some plastic wings. With a little glue, stick them on your back and you will look like a butterfly.

This idea did not convince him, because with plastic wings he could not fly and escape from the mud. He would only be a butterfly in appearance, but he would still be a worm and would still be living in the mud.

One day someone told him: Look, Pancho, your dream is not as crazy as your friends say. You can become a butterfly — but to do so, you have to die to the life of a worm. And it is true, in nature, there is a time when worms make something (a cocoon) that looks like a nest, or rather like a grave. They enter and close themselves inside the nest, and then after some time, they emerge from that nest-grave a butterfly.

We are more than worms, we are butterflies — but we must accept dying to life as a worm: That is, we must die from selfishness so that we can live for others. We must die to sin, which is like mud that makes us dirty. The Risen Lord tells us: Do not be afraid. Peace be with you. Peace is the gift that the Risen One gives us, and that peace makes it possible for us to be truly free.

But beware! We cannot be content with plastic wings — that is, we cannot be Christians just in appearance. Therefore, we need to turn our minds and hearts to the Lord and leave behind a worm’s life. This is what our baptismal promises mean. Today we are going to renew these promises — to reject Satan who wants us to continue living in the mud and in fear.

Your journeys may have been like a painful “way of the cross,” like Christ's to Calvary. I am not saying that there will be no difficulties ahead. Just know that God is with you. With the peace that Christ gives us, live as children of God, follow the example of your “elder” brother, Jesus Christ: In this way, you will be more beautiful and freer than even butterflies.