In addition to Zoom, one produced PE videos, another crafted a 'home learning kit'

MIAMI | Before the start of the COVID-19 quarantine, most teachers thought Zoom was just another word in a Dr. Seuss book. And now? It has become an essential tool in their virtual classrooms.

Seemingly overnight, teachers went from high-fiving their students in the hallways, slipping band-aids on the 4-year-old who just fell, and going over a lesson one more time — to make sure the whole class “gets it” — to adapting everything they have been doing for years to online platforms.

But adapt they did, for their students' sake. 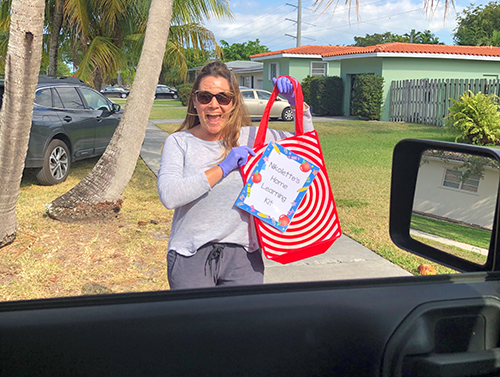 Blessed Trinity kindergarten teacher Melinda Usallan holds up one of the home learning kits she personally dropped off at each of her student's homes so they would have everything they needed to continue learning despite not being able to attend class in person because of the coronavirus pandemic.

Gabriel De la Vega, athletic director, dean of discipline, and physical education teacher at Immaculate Conception School in Hialeah, sprung to the challenge. Within hours of knowing the new reality, he created a YouTube video for his new Virtual PE class which became an instant success. What made it a hit? He dressed up like St. Patrick.

“I wanted to keep it light and fun for the kids and their parents so it would be something they could look forward to and put a smile on their faces,” De la Vega said.

And he kept doing it. With the help of Sarah Gandarillas, the computer teacher at Immaculate Conception, De la Vega produced a video each week, each one more creative than the last. Every video incorporated a theme to get the kids up and moving, and more importantly, laughing.

In Coach Gaby’s Week 4 Video, De la Vega included a special challenge. Garbed in firefighter gear, he challenged his students to do their workout while holding up a “Thank You” sign to honor first responders on the frontlines of the fight against the coronavirus. He saw to it that first responders received the videos of the children working out.

Despite the popularity of his online videos, De la Vega said he missed the interaction with his students.

“This experience has definitely made me more appreciative of my everyday grind, just waking up and seeing my student’s faces. I never thought I would be out of class in May or miss my eighth-graders' graduation. It has made me appreciate what I do even more.” 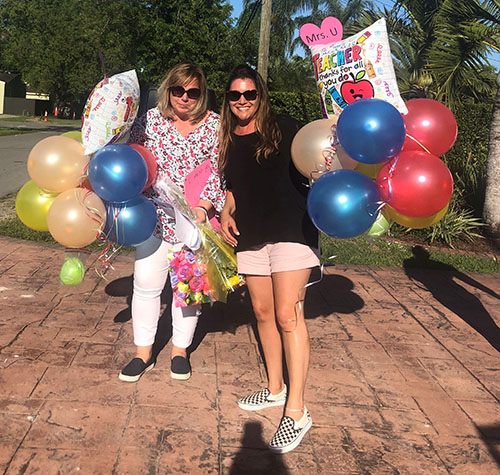 Blessed Trinity students showed their love for kindergarten teacher Melinda Usallan, right, and her assistant, Elena Martinez, by caravanning to Usallan's house and holding a parade in her honor. They showered her and Martinez with flowers, balloons and handmade cards.

During the final weeks of school, De la Vega opened a “Questions with Coach” chat on Zoom so he could say hi to the kids and they could talk to him about sports or anything they wanted. The point, he said, was “just to connect.”

De la Vega added that the uncertainty about when students will return to school makes him “afraid of what the new normal is going to be."

“I feel scared for the safety of children and the unknown. But I do feel it is important we return because the students need the interaction and it’s just not the same virtually,” she said.

To combat the lack of face-to-face interaction, Usallan made a plan she knew would work for more than two weeks. She and her team at Blessed Trinity developed a routine for the younger students so they could recreate the classroom at home. The plan included videos of her morning prayer, bedtime stories, and other read-alouds that the kids could go back and watch.

Usallan also used Zoom to connect with her 6-year-olds, but not for instruction — for play time. A teacher for 18 years, Usallan knows how important it is to have fun in the classroom.

“They need to be encouraged," she said. "If you have them playing a game, learning the concept becomes easy because it’s hands-on.”

With the help of her assistant, Elena Martinez, Usallan created a “Home Learning Kit” complete with materials the kids could use at home while connecting with her virtually. The kit included white boards, counting chips, sidewalk chalk, pink bingo dabbers and much more that she always keeps in her teaching arsenal to make learning fun. In other words, she brought the classroom to them. After assembling the materials in her house, Usallan and Martinez hit the road to deliver the essentials to every kindergarten student, complete with instructions and a letter. 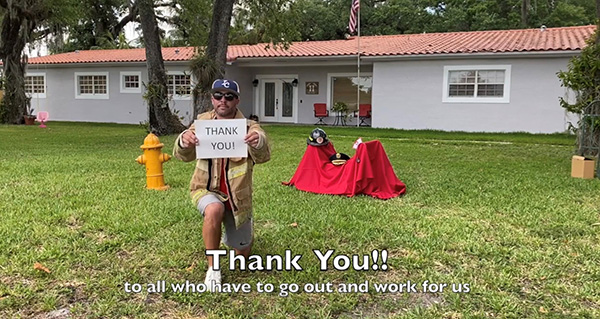 Immaculate Conception's Coach Gabriel De la Vega encourages his students to honor those who have been on the frontlines of the virus in his week 4 YouTube video, one of a series he did as part of his virtual PE class.

Near the end of the school year, she drove again to each student's home to drop off her annual memory book, class movie, and a yard sign — a tradition she began when she first started teaching kindergarten at Blessed Trinity 16 years ago.

“I really feel she cares about every single kid in that class and it shows," said Adriana Perez, whose three daughters have been taught by Usullan. "She is sweet and understanding. I also think she made everyone feel comfortable during the transition process. Her plans were clear and fun for kindergarten.”

As memes and videos flood the internet about how parents forced to become teachers are not "cut-out" for the job, a whole new appreciation has been given to those in the education field, Perez said.

“I’ve always had respect and admiration for teachers but now we really see how teachers are able to capture the child’s attention and keep them engaged while also creating a fun learning environment. It’s not a job that just anyone can do.”

Below is another PE video, this one created by St. Ambrose School PE teacher Sean McKeown.