Never too young to make a difference 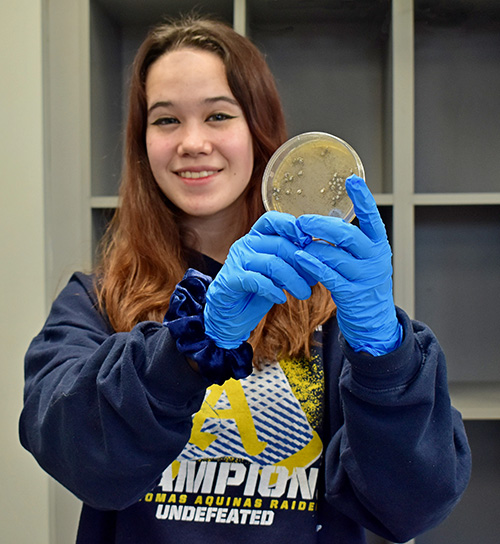 Kaitlyn Urruela shows a specimen of the fungus she grew at St. Thomas Aquinas High School to explore how the microbes might be used to break down waste plastic.

FORT LAUDERDALE | Billions of tons of plastic pile up on land and choke the waters of the world: What can one person do?

Ask Kaitlyn Urruela. The sophomore at St. Thomas Aquinas High School just may be on the track toward a solution: getting microbes to eat the stuff.

The New York Institute of Technology recently looked at Kaitlyn's research project and awarded her a $300 grant. If her line of work pans out, one of the largest environmental problems may be solved by some of the smallest creatures. Her project — A Novel Microbial Process to Accelerate Degradation and Demineralization of Bioplastics — also won second place at the Broward County Science Fair.

As part of her work in the Honors Independent Research class at Aquinas, Kaitlyn has been investigating ways to speed up the breakdown of old bags, bottles and other containers, which can otherwise pollute the environment for years. Her weapons: fungi and bacteria.

She has the admiration of Diane Enten, who teaches the class along with Laura Shearer. She marveled that Kaitlyn, 15, is still in her first year in independent research.

"She's been amazing," Enten said. "A lot of students just want to jump in and compare stuff, but she understands the science behind it. If this is her first project, imagine what she can do next year."

Kaitlyn got interested in the matter of plastics via a website on science projects — especially after she read some sobering facts.

She cited a 2017 study in the journal Science Advances that estimated 8.3 billion metric tons of plastics have been produced since the 1950s — and 6.3 billion have been simply dumped in landfills or elsewhere, such as rivers and oceans. 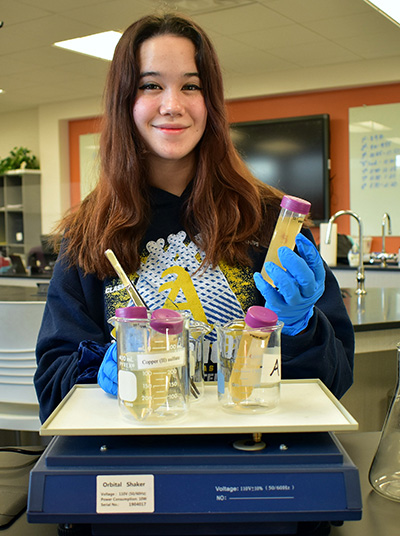 Kaitlyn Urruela shows some of the equipment she used in a science project at St. Thomas Aquinas High School to explore how microbes might be used to break down waste plastic.

Scientists have produced "biodegradable" plastics, which can be consumed by germs in the environment; but it can take up to three years, Kaitlyn said. Her experiment explored ways to speed up the process.

"I saw that my family used bags of biodegradable plastics," said Kaitlyn, who lives in Hollywood. "At first I thought we could just bury them, but that wouldn't allow any control over variables."

TO BUILD A BIOREACTOR

To attain that control, she built a simple bioreactor with standard lab materials such as beakers, flasks, forceps and petri dishes. From a biological supply company, she bought specimens of a bacterium known as Pseudomonas and a fungus called Aureobasidium pullulans.

She grew the microbes in a solution of dextrose agar, a common substance typically used for such research; then she observed how they acted on two types of biodegradable plastics.

One type of plastic was Polylactic acid (PLA), which she cut into strips and placed in flasks. The other was Polycaprolactone (PCL), which she used in tiny beads, placed on cheesecloth in flasks. To the PLA, she added the bacteria; to the PCL, the fungus. Then she monitored the rate at which the organisms consumed the plastic for two weeks.

Her experiment in November failed, she said; some agar was left on the plastic, and some of the fungus was left on the cheesecloth. That meant Kaitlyn couldn't get accurate measurements on the weight before and after.

"I had a lot of anxiety that I didn't meet the deadline," she confessed. "I had to come up with a new idea almost the same day." 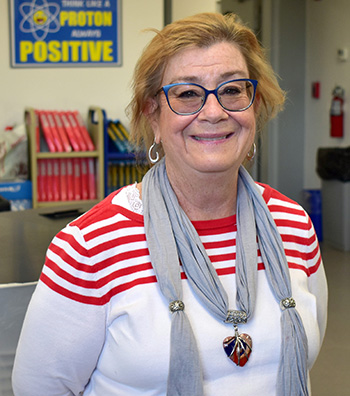 Part of her solution was to use a rinsing process to remove the excess agar. She also substituted the cheesecloth with petri dishes. The adjustments provide a better measurement of the weight. And they satisfied the institute, which e-mailed her about the grant on Jan. 24, 2021.

"I was in shock at first," Kaitlyn said. But she then gleefully called her parents and texted Enten.

Kaitlyn's project is just one part of the innovative work being done at the Honors Independent Research class, which supports 15 students in 13 categories. Among their studies:

Kaitlyn said her science project blends well with Catholic social teaching on the environment and the economy. This year, in fact, her philosophy class took a look at Laudato Sí, the 2015 encyclical by Pope Francis on creation care and social responsibility.

"As Catholics, we should care for the environment," Kaitlyn said. "Because of COVID this year, I couldn't go out and pick up waste plastic. But this [science project] is another way to help."

With the grant money, she plans to upgrade her bioreactor and get a more sensitive scale. The equipment would allow more precise measurements of the rate of degradation, she said.