Coach Smith has been teacher, coach, athletic director, mentor and friend to thousands at Aquinas for the past 49 years. He has been the foundation of one of the country’s most recognized and successful high school athletic programs, establishing the standard for athletics at St. Thomas, in Broward County, the State of Florida and the entire country. 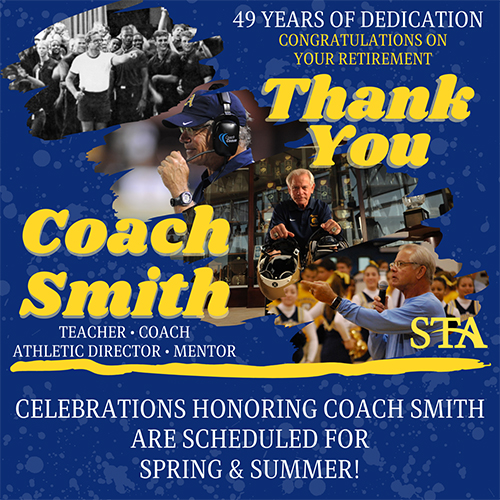 St. Thomas Aquinas High School will pay tribute to coach and athletic director George Smith later this year. He announced his retirement at the end of February, effective at the end of the 2020-2021 school year.

More than the victories and awards, Smith said he is most proud of the legacy left on the STA campus and the drive he inspired in the hearts of the athletes he has come to know and love. “What happens off the field is the greatest reward,” he said.

St. Thomas Principal Denise Aloma, speaking of her colleague and friend, noted that “for almost 50 years, as teacher, coach, and AD, George Smith has set the highest of goals for athletes, coaches and all of Raider athletics. His leadership and commitment provided the platforms to consistently surpass those goals. His selfless, tireless, extradentary contribution to the success of the program is etched in the halls of STA. The hearts and minds of all of us blessed to have known him are strengthened.”

Msgr. Vincent Kelly, former supervising principal at St. Thomas, noted the assistance Smith has given to placing athletes in prestigious colleges throughout the nation. “George Smith has made a vibrant contribution to the lives of thousands of students and adults. Through the medium of football and athletics in general, he has given so many the awareness and then the development of their own personal dignity, their natural talent and their potential for leadership in the future. We are truly grateful to George for a life of dedicated service, not only to youth, but to all of us.”

Smith was hired as history and physical education teacher at St. Thomas in 1972.He started the school’s wrestling program that same year and continued as head wrestling coach until 1978. Smith posted an overall record of 72-19 and was named Wrestling Coach of the Year in 1973-74 by the Miami Herald and twice for the South Atlantic Conference.

In 1975, Smith was named head football coach and the Raiders began an unprecedented sprint towards excellence for the next 33 years. Under Smith’s helm, the Raiders went 361-66, amassing 18 district championships, 8 undefeated regular seasons, 6 state championships, and7 state runner-ups. Under Coach Smith, St. Thomas led the state in most appearances in the tournament series with a 69-20 record. As head coach, he holds the record (13) forappearances in the state tournament series and is the third-winningest football coach in Florida history. During Smith’s years as head coach, 580 players went on to play college football, and 30 continued to the pros.

Smith took on the leadership role as STA’s Athletic Director in 1982. His vision and community development provided the platform for the program’s rise towards state and national prominence. St. Thomas is a Nike Elite School and Gatorade Top 25. Raider football appeared on national networks at least once for the last 14 years.

Currently, more than 1,000 student-athletes participate on 34 teams at   St. Thomas. During his 39-year AD tenure, Raider athletics has won 111 FHSAA state championships and 13 national championships plus myriad other Florida and national recognitions.

Smith himself has been inducted into the Broward County Sports Hall of Fame, the City of Fort Lauderdale “Walk of Fame,” the Florida Athletic Coaches Association Hall of Fame, the FHSAA All Century Coaching Staff and MaxPreps 12th Best Coach of All Time, among many other recognitions.

The school is planning events later this year in honor of Smith.

Wednesday, 24 Feb 2021
Never too young to make a difference