'A shower of roses'

Artworks at Little Flower parish – both of them

St. Therese of Lisieux, the church's patron, stands in a starry sky with angels offering flowers at Little Flower Church in Hollywood.

MIAMI | To reach sainthood, you don’t have to face lions or found missions or travel to distant lands. All you need are loving words and deeds.

That's the “Little Way” of St. Therese de Lisieux, the frail Carmelite also known as the Little Flower. She was a nun for less than a decade and died at the age of 24. Yet through her simple teachings, her gentle example and her ardent love for God, she has been named a Doctor of the Church – and the patron saint of two parishes in this archdiocese.

“Miss no opportunity of making some small sacrifice, here by a smiling look, there by a kindly word; always doing the smallest right and doing it all for love,” she wrote in her autobiography. 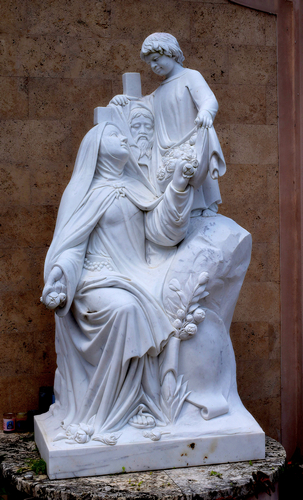 St. Therese adores an image of Jesus in this full-size statue, recalling her formal name, St. Therese of the Child Jesus and the Holy Face. The statue is at Little Flower Church in Coral Gables.

Born in Alencon, France, in 1873, her parents were Louis and Zelie Martin. Both had tried unsuccessfully to join religious orders; Louis became a watchmaker, while his wife became a lacemaker.

They bore nine children, but lost four of them in childhood. Therese herself was so sickly that her survival, too, was in doubt for awhile. For her first year and a half, she was under the care of a nurse.

Therese not only lived but became a bright, giggling, mischievous, even stubborn child. Her cheery manner faded, however, after the loss of her mother to breast cancer when Therese was only 4.

“My happy disposition completely changed,” she recalled. “I became timid and retiring.”

Her father and sisters showered her with love to try and console her. Louis often took her on walks, visiting churches and praying before the Blessed Sacrament.

Therese came to love Sundays, and the first word she learned to read was “heaven.” Her sisters were likewise fervent Catholics, and they all became nuns.

It was after her favorite, Pauline, entered the Carmelite monastery in Lisieux that Therese experienced a supernatural healing. She had suffered fevers, headaches and tremors, and doctors could find no cause or cure.

She then prayed while facing a statuette of Mary near her bed. The statue, she said, “radiated kindness and love,” and her malady left her. The event has led to the devotion known as Our Lady of the Smile.

Therese soon tried to join Pauline at the convent but was rebuffed because she was too young. Instead of accepting the decision, the girl’s stubbornness took her to the local bishop.

When he likewise said no, she went with her father to Rome and boldly asked Pope Leo XIII to order the Carmelites to accept her. The Holy Father told her to accept the decision of the superior, who finally relented and allowed her to join when she was still 15.

During her nine years there, Therese worked in the sacristy, cleaned the dining room, taught novices, wrote short plays for the sisters, and joined in community prayers. She also prayed and wrote constantly in support of missionaries. 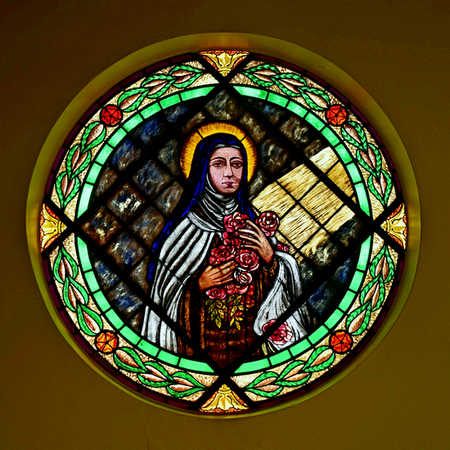 St. Therese of Lisieux is honored in the rose window at Little Flower Church in Hollywood.

But her life held more trials. Her father had a series of strokes, then died. Four fellow Carmelites, including the Lisieux community’s founder, died of influenza. Some of the other sisters, most of them much older, often criticized and bullied her; one even splashed hot wash water in her face.

Partly in response, and partly from awareness of her own small stature, Therese developed her idea of the “Little Way” to holiness: kind words, acts of service done with love, cheerful patience with slights and difficulties, even seeking out time with those whom others avoided. She even said love was her vocation.

“The only way I can prove my love is by scattering flowers,” she said. “And these flowers are every little sacrifice, every glance and word, and the doing of the least actions for love.”

So strong was her discipline by 1896 that her fellow sisters were unaware she began coughing up blood. She hid for a year as she worked beside them with her usual smiles. But when it was evident she had tuberculosis, she was ordered to stay in the infirmary, where she died Sept. 30, 1897.

Her prioress asked her to write her life story, and Therese made an extraordinary promise: “After my death, I will let fall a shower of roses. I will spend my heaven doing good upon earth. I will raise up a mighty host of little saints.”

One of those roses was her autobiography itself, published in 1898 as “The Story of a Soul.” Millions of copies have been printed in more than 50 languages, and it’s now offered free online.

In 1925, Pope Pius XI canonized Therese. And in 1997, Pope John Paul II declared her a Doctor of the Church – the youngest of all Doctors and the second Carmelite nun so named, after St. Teresa of Avila. Her feast day is Oct. 1.

Even her parents, Louis and Zelie, were declared saints in 2015 by Pope Francis – the first couple to be canonized simultaneously.