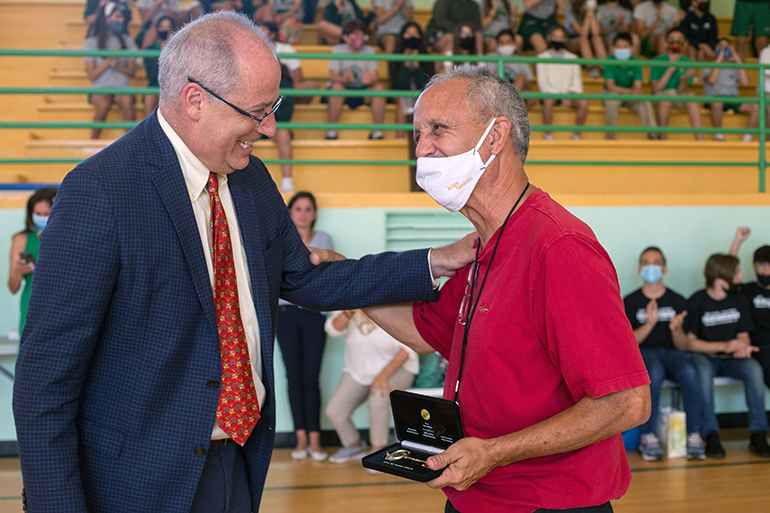 Miami Beach Mayor Dan Gelber presents the Key to the City to Art Fernandez, who is retiring after 39 years as St. Patrick School's physical education teacher.

MIAMI BEACH | On Monday of the last week of school, Art Fernandez expressed great surprise when he walked into the St. Patrick School gym — one where he spent a lot of time as a youngster and as a coach. This time, he saw a gym full of family, students, faculty, alumni and community leaders who came to honor him.

They packed the gym to return some of the love Fernandez shared with them, to honor his 39 years of coaching at St. Patrick School and his 35 years serving Miami Beach Parks and Recreation. Hence, it made sense that he received a Key to the City.

“Coach Fernandez taught, practiced, and modeled the importance of good sportsmanship,” said Miami Beach Vice Mayor Michael Gongora, who came to the school for the Key presentation. “He is an amazing role model that not only talked the talk but walked the walk, setting a good example for his students.” 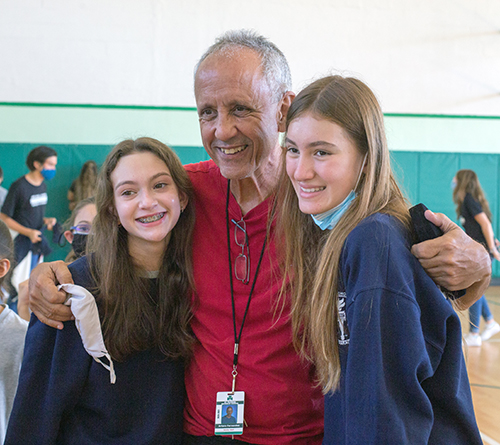 Art Fernandez poses for a photo with seventh graders Olivia Peacock and Sofia Lisamore after receiving the Key to the City of Miami Beach from Mayor Dan Gelber. Fernandez is retiring after 39 years as physical education teacher at St. Patrick School on Miami Beach.

Fernandez, who will turn 65 this summer, laughed about receiving the Key to the City from Gongora, because Gongora often joked about wanting a key to St. Patrick’s gym. Both grew up in the Miami Beach neighborhood around St. Patrick Parish and School, and Fernandez never went far from it.

He went to St. Patrick as a kindergartner, then to another school for two years before attending St. Patrick in grades 3-10. He spoke about playing ball in the gym as a kid, and thanked the priests who would open the gym to neighborhood kids. So when he got the job as St. Patrick’s coach in 1982, it was his turn to hold the keys.

“When I got that job, I thought I was luckiest guy, because I played ball there, that was my area,” Fernandez said.

He saw the gym as a trust, and took care of it as if it were his home. Because he’s been around St. Patrick’s for so long, he loves telling stories about what each building housed over the years. Alas, after his 10th-grade year, St. Patrick closed its high school, forcing Fernandez to graduate from Miami Beach Senior High.

“We were upset about it, because we love our little school,” Fernandez said. “But I met people I would’ve never met if I had stayed at St. Patrick’s, my little school. Everything worked out.”

Father Roberto Cid, pastor of St. Patrick Parish, said that Fernandez fosters everything that’s good about sports — playing by the rules, being team players. He lauded Fernandez for guiding students of all skill levels, for encouraging students to build character, embrace their humanity and care for their bodies.

“That’s Catholic,” Father Cid said. “As Catholics, we recognize that the body is a temple of the Holy Spirit. It is to be treated with reverential respect. That’s what he taught his students.”

Fernandez said that faith and sports are glued together because they encourage character. His teams pray together before games. One of his proudest moments was when one of his teams won a championship but did not taunt their opponents. He said the kids would help each other off the floor.

“Those were moments not just winning, but the way we handled the winning at the end,” Fernandez said. “It was so impressive, and you hope you had something to do with it. These are good kids.”

Considering that St. Patrick students go on to high school at Immaculata-La Salle, Columbus, Belen Jesuit or Lourdes Academy, it’s likely that top athletes have come through Fernandez’s ranks. However, he didn’t want to name any of them, for fear of forgetting someone. He said that he especially focused on students who were not star players. His goal was to instill a love of team sports and exercise that would endure a lifetime.

“I wanted to encourage kids who aren’t stars to have fun with it, not put pressure on them that the better players play under,” Fernandez said. “I try to help them enjoy it. My dream is to help them learn to play games and get along with people.” 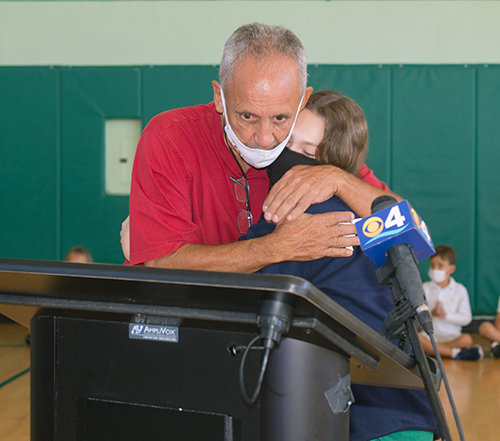 Art Fernandez hugs seventh-grader Olivia Peacock, 12, after receiving the Key to the City of Miami Beach from Mayor Dan Gelber. Fernandez is retiring after 39 years as physical education teacher at St. Patrick School on Miami Beach.

Barbara Higgins, who like Fernandez went to St. Patrick as a student and later taught there, said that Fernandez made every student feel like a superstar. She was in fourth grade when Fernandez began coaching.

“It wasn’t all about the win, it was more about enjoying the actual game,” Higgins said. “Coach would hold tryouts, but he’d accept everybody. It was about the experience kids were having. He managed to make you feel like a rock star.”

Lucia Baez-Geller, another St. Patrick alumna, concurred. Fernandez coached her in grades 1-8. When she taught at Miami Beach High from 2005 to 2020, she sought his assistance hosting field days. He attended her wedding in April and supported Baez-Geller when she was elected to the Miami-Dade County School Board.

She said that Fernandez was a father figure who gave tough love when needed but also compassion. “His greatest pleasure was to see his students grow, succeed and be of fit body — because of his being a physical-education coach — but also in mind and heart,” Baez-Geller said. “You had no choice but to be the best around him, because he always demanded it.”

She said she wanted to emulate Fernandez’s ability to communicate directly with the students. “He spoke to you as if you were a full person,” Baez-Geller said. “He never spoke down to you. He was always uplifting and expected the best. Every moment is a teachable moment. Regardless of mistakes students make, that doesn’t define them. That’s something he taught us.”

Since Fernandez treated St. Patrick as his home, it made sense that he would treat his students like family. That led to a genuine concern, a love that students remember decades later. 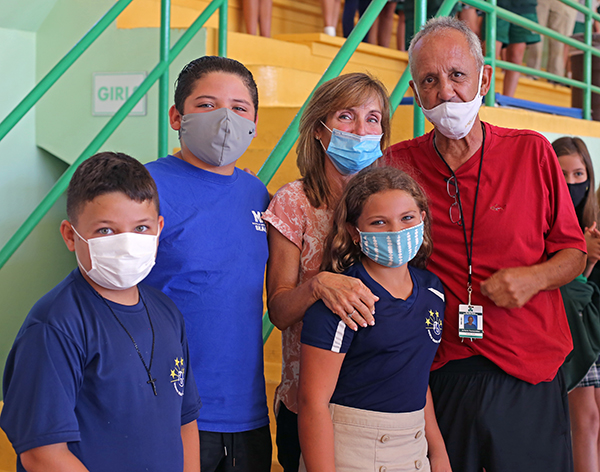 Art Fernandez poses for a photo with his grandchildren, Franco Fernandez, 9, Austin West, 12, and Samantha West, 10, and his wife, Lourdes Fernandez, after receiving the Key to the City of Miami Beach from Mayor Dan Gelber. Fernandez is retiring after 39 years as physical education teacher at St. Patrick School on Miami Beach.

Fernandez was there for them not only when it was expected, Higgins said. He also attended weddings and funerals involving relatives of St. Patrick students and faculty. He would help former students in any way he could — from giving $20 to pointing a student toward a job. When her father-in-law died, Higgins told no one. Yet Fernandez found out and attended the funeral.

“It’s things like that where he doesn’t get the credit, but he doesn’t want the credit,” Higgins said. “He wants you to know that he’s there for you. The one time you need to see that friendly face, he’s there. He doesn’t expect anything in return — ever.”

Fernandez has been a confirmation sponsor to many former students, most recently Immaculata-La Salle sophomore Trey Steward, who continues to play basketball for the Royal Lions.

Fernandez impacted St. Patrick Parish and School in great ways. But they had to share him with the City of Miami Beach Parks and Recreation, where he worked from 1980-2015, serving full-time in 1987-2009 running soccer, flag football, basketball and baseball leagues and leading the Youth Center.

Fernandez said he got to know a different group of kids working for the city, but he ran those leagues with the same integrity that he ran St. Patrick’s programs.

Fernandez credits his wife, Lourdes, and his family for helping him juggle both St. Patrick’s and the Parks and Recreation duties. He also lauds the school for allowing him to leave at 4:30 p.m. to go straight to nearby Flamingo Park for flag football.

He said he benefited from living five minutes away from both the school and the parks. He would bring his kids to work on the weekends, and his wife would bring him dinner. “If I’d been working and living an hour away, that might have been a different story,” Fernandez said. “Being so close made it so doable. Things fell into place. I was very lucky.”

An intensely private person, he felt a little overwhelmed at all the honors that came his way after he announced his retirement. What he will miss the most, he said, is walking through the hallway a half-hour before his first class and getting hugs from first- and third-graders. He’ll also miss the conversations with the older students.

“I will miss that a lot — my interaction with kids, more than the teaching,” he said. “They teach you a lot. The kids taught me a lot.”

Baez-Geller, one of many in the crowd for the Key ceremony June 7, 2021, said she reveled in seeing Fernandez — a man who gives so much love — receive love in return. “For someone so selfless, it was really beautiful for him to kind of show us his humanity,” she said. “To all of us, he is a superhero.”

Fernandez said he is the one who has been blessed. “I still have kids call me on Father’s Day, some 35-40 years old,” he said. “How can you beat that?”