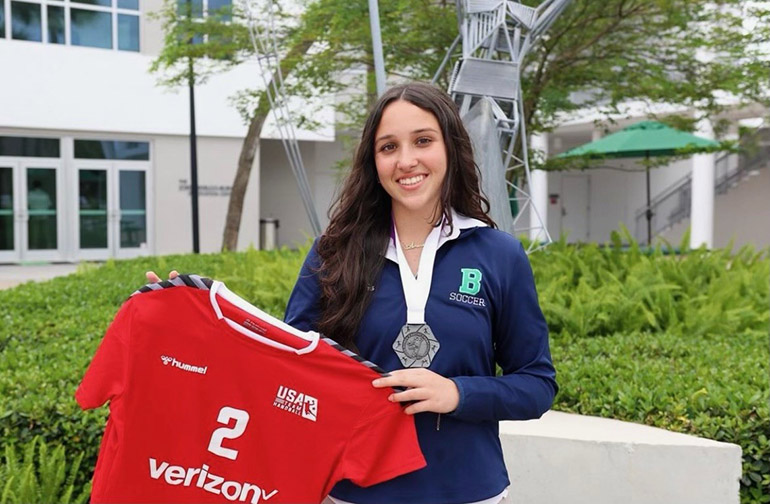 Amanda Sumalla, who will be a junior this fall at St. Brendan High School, holds up her Team USA jersey. She is representing the U.S. at the Women's Junior World Championship in Slovenia from June 22 to July 3, 2022.

MIAMI | A student athlete at St. Brendan High School is shining the light on a sport popular in Europe but not known to many in the U.S.: handball.

Amanda Sumalla, who will be a junior this fall at St. Brendan, is representing Team USA while balancing school, family, and friends.

Handball is an indoor court sport, a combination of soccer, basketball, and hockey, Amanda explained. “It’s a very physical, fast, and complex sport, but the rules are simple,” she said.

Each team consists of seven players including the goalie. Teams play two halves, 30 minutes each, and the team with the most goals wins.

Handball is a popular and common sport throughout Europe with a small fan base within the U.S., which Amanda hopes to expand in the future.

She said she fell in love with the sport back in her native Spain at a very young age. “When I was little I was trying to find the sport that I loved. I tried swimming, volleyball and gymnastics, but none of them were for me.”

One day, she saw an old teammate practicing handball and she has been playing it ever since. “I was six years old,” she said.

That constant practice earned Amanda a spot on Team USA's junior handball team in 2019, and she is representing the U.S. at the Women’s Junior World Championship in Slovenia from June 22 to July 3, 2022. Team USA lists her as an alternate left wing in a team composed of 20 members, many of whom play at the university level.

Aside from being on the national team, Amanda is a member of St. Brendan’s girls’ varsity soccer team. She also plays for a club team, Tropical.

How does she balance life as a multisport athlete and high school student?

“I am able to balance varsity soccer and handball because I don’t play handball in my everyday life, but I do play soccer in my everyday life. There are no current teams here in Miami for girls my age, so I do soccer instead. With handball, I traveled in the past to Chicago a couple of times to practice or play tournaments, or I also go to North Miami to practice with the Inter Miami Handball (Club) some Sundays to be engaged with the sport.”

Amanda hopes to be part of the handball team at the 2028 Olympics and stay on as a member of Team USA as she goes through high school.

“I look forward to what she will contribute to Team USA as well as the Sabre Nation,” said St. Brenda’s principal, Ivette Alvarez, referring to the school's mascot.

Handball player Amanda Sumalla, #2 in front, poses with the U.S. Women Junior National Team, which she first joined in 2019. She is representing the U.S. at the Women's Junior World Championship in Slovenia from June 22 to July 3, 2022.

Lourdes Martinez is a rising senior at St. Brendan High School in Miami.