'We cannot save babies without reaching women first' 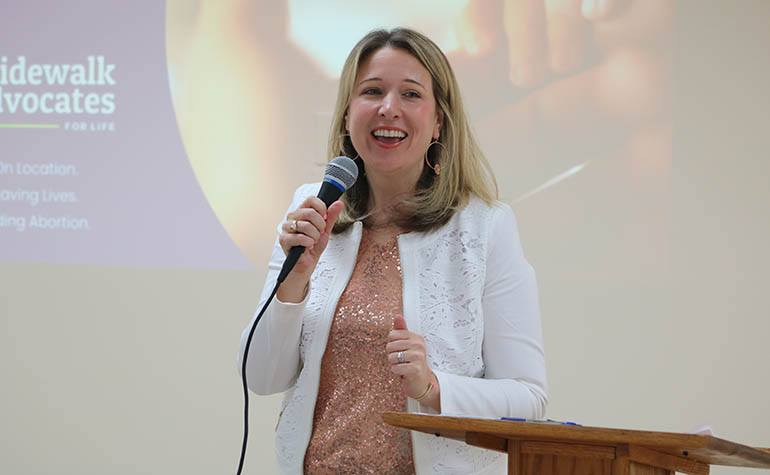 Lauren Muzyka, founder of Sidewalk Advocates for Life, presents a series of talks during the Sidewalk Advocacy Training held Sept. 11, 2021 at the Madonna Retreat Center in West Park. 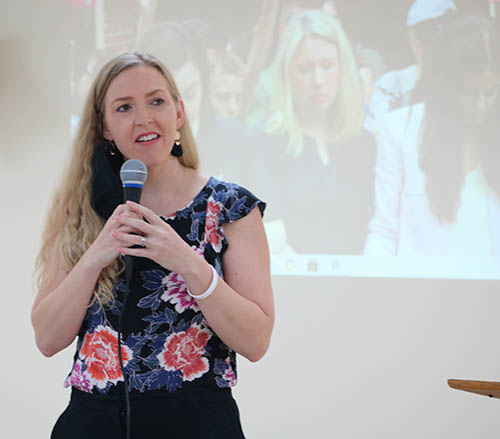 WEST PARK | Libby Johnson, a retired delivery room nurse, has prayed near a Miramar abortion clinic for the past six years for miracles that would close the facility and end abortions there. But now, after reflection and many talks with the Lord, she said she feels called to do more.

Johnson, a parishioner at St. Edward in Pembroke Pines, confessed that she has prayed for but never actually talked to any of the Miramar Women’s Center clients. She simply doesn’t know the proper approach to encourage them to choose life and direct them to alternative services and help.

“They don’t know that there is help out there. We want to help them. We don’t want them to make a second mistake,” she said. 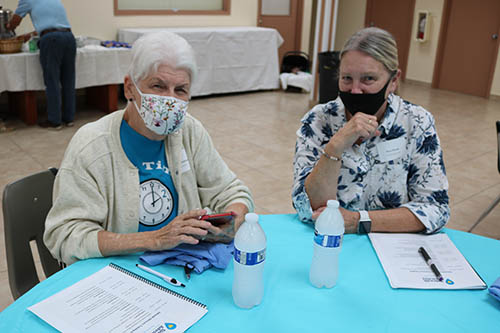 Libby Johnson, left, and Myra Puccio attend the Sidewalk Advocacy Training Sept. 11, 2021 at the Madonna Retreat Center in West Park. Johnson is a retired delivery room nurse. She was there to learn how to be an effective sidewalk advocate near an abortion clinic where she has prayed for the past six years.

Johnson was among more than 80 people who attended a Sidewalk Advocacy Training Sept. 11, 2021 at the Madonna Retreat Center in West Park. Hosted by the archdiocesan Office of Respect Life, the session focused on successful sidewalk advocacy or crisis intervention on public walkways near abortion facilities.

The training was a first for the Archdiocese of Miami but not the last. The five-hour program, presented in both English and Spanish, marked the beginning of a joint venture between the archdiocese’s respect life ministry and Sidewalk Advocates for Life, a national non-profit based out of Allen, Texas, a suburb of Dallas.

“This is the first time Sidewalk Advocates for Life has worked with an archdiocese,” said Rebecca Brady, director of the archdiocesan respect life ministry. “We are lucky to have Lauren Muzyka, the organization’s founder, coming from Texas to be at the training.”

Established seven years ago, Sidewalk Advocates for Life offers training, tools and full-time staff support to sidewalk advocacy groups around the globe, to help them peacefully and lovingly reach out to those entering an abortion facility. So far, the organization has trained volunteers at 214 locations in the United States, Mexico and Australia. The Sept. 11 training marked their first efforts in Florida. The plan is for future training sessions to take place four times a year.

“We have more than 25,000 abortions in the area a year,” said Brady about South Florida’s high abortion rate. “We are losing our brothers and sisters. We need help to do something more.” 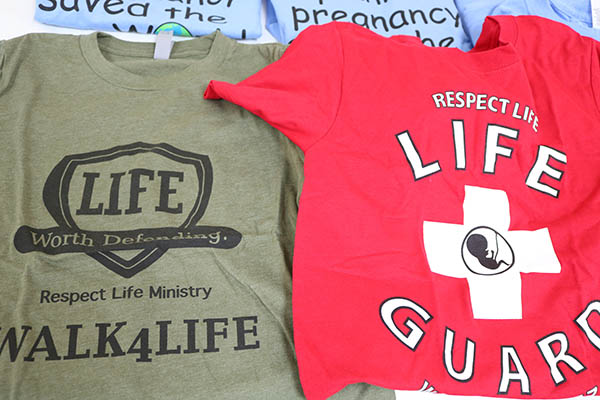 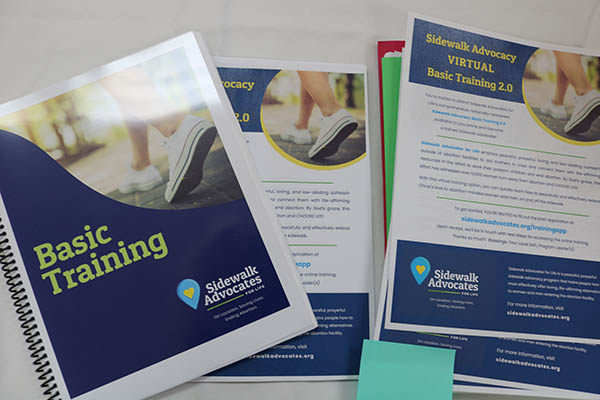 Training materials are displayed on tables as part of the Sidewalk Advocacy Training offered Sept. 11, 2021 at the Madonna Retreat Center in West Park.

Florida is among the top three states with the highest abortion rates in America. New York leads all the states followed by California and Florida. According to the Florida Agency for Health Care Administration, 74,868 abortions took place in the state in 2020.

“We know that lives can be changed. We do see people change their minds. The faithful want to get involved, but they want to do it the right way. It needs to be done in love. We need to preach the truth in love,” said Brady.

Muzyka spearheaded the national organization after working in the pro-life movement for more than 20 years, often standing on the sidewalks talking to desperate women seeking to terminate their pregnancy.

“We see a lot of high school girls and girls in college. We have seen young girls. One was only 11 years old,” said Muzyka, an attorney who serves as executive director of Sidewalk Advocates for Life. She also was a former strategist for the national 40 Days for Life organization.

Her national team at Sidewalk Advocates for Life includes mothers, fathers, professionals, parish ministers and lifetime pro-lifers. The group’s mission statement, as posted on their website, is “to transform the sidewalk in front of every abortion facility in America and beyond into a place of real help and hope and end abortion.”

“We want to teach people to reach out on the sidewalks to help women,” said Muzyka during her presentation. “We cannot save babies without reaching women first.”

During the training, Muzyka announced that Linda Fernandez, a member of St. Augustine Parish in Coral Gables, has joined her team and will serve as the Southeast Program Coordinator for the organization. Her role is to serve parishes and the community by getting people trained. 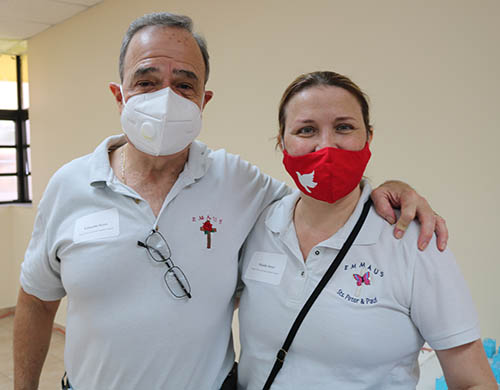 Eduardo Serer and his wife, Maida, members of Sts. Peter and Paul Parish in Miami, participated in the Sidewalk Advocacy Training offered Sept. 11, 2021 by the Office of Respect Life.

“This approach to sidewalk outreach is, first and foremost, rooted in peaceful prayer,” Muzyka said, adding that a smile, a friendly greeting, listening and letting the vulnerable know about low or no-cost resources and support are key to touching a pregnant woman’s heart and giving her hope.

“We let them know that they will soon find everything they need at the pregnancy center, including ongoing support, medical assistance, financial support, baby items, and referrals for an array of other powerful resources, as well as a chance to put their faith in Christ,” Muzyka said.

Deacon James Dugard, a religion teacher at Christopher Columbus High School in Miami who serves at St. Patrick Parish in Miami Beach and the respect life ministry, welcomed participants to the training. He reminded everyone of the date — the 20th anniversary of 9/11 — and after praying for those 3,000 or so victims, reflected on the tragedy of abortion, which has taken 62 million lives in the U.S. since becoming legal in 1973.

The training included talks and video presentations. Pro-life shirts and other items were on hand for purchase, with proceeds going to support Respect Life’s five pregnancy help centers.

Steven Foley, who heads St. Ambrose’s Ministry for Life, attended the training with a small group from his Deerfield Beach parish. He said he was familiar with Sidewalk Advocates for Life and even completed a remote training program, offered via DVD by the organization.

Eduardo Serer of Sts. Peter and Paul Parish in Miami participated in the training with his wife, Maida. They lead pro-life ministry at their parish and faithfully pray near a Planned Parenthood facility on Coral Way on a regular basis. But they have never ventured onto the sidewalk to talk one-on-one with a woman in a crisis pregnancy.

“I want to learn how to reach out to women and rescue them and their babies from abortion,” said Serer. “I want to do more to save babies.”