Adrian Rodriquez, a fifth-grader, examines a "sock cupcake" he made for seniors at group homes.

Third-grader Preston Deve shows a stained-glass picture of a cross he made as a keepsake for the Service Learning Day.

Students shake and spin a box to spread “splatter paint” on bookmarks for students in hurricane-stricken Fort Myers.

Colorful sporks - spoon on one end, fork on the other - await packing in food bags for the homeless.

Students at St. David School form an assembly line to assemble food bags for the homeless.

Fuzzy socks are among gifts planned by St. David students for chemotherapy patients.

Brianna Pitre supervises as Faith Dorival, left, and Michael Dolan play rock-paper-scissors to determine who can lead the class in prayer.

Brianna Pitre, left, and Gabrielle Yaw Ching emcee a video from the Leukemia and Cancer Society.

Every year around All Saints Day, the school holds a day of projects to raise awareness of the needy, as well as to show appreciation for community helpers. This year, they included not only the homeless and elderly, but cancer patients, the unborn and even dogs.

“The mission is to give and serve as Jesus did,” assistant principal Breanna Becker said as the day got under way Nov. 4, 2022. “We want the students to think how they can be servants of God in the community. And not just what they see around them, but beyond that.” 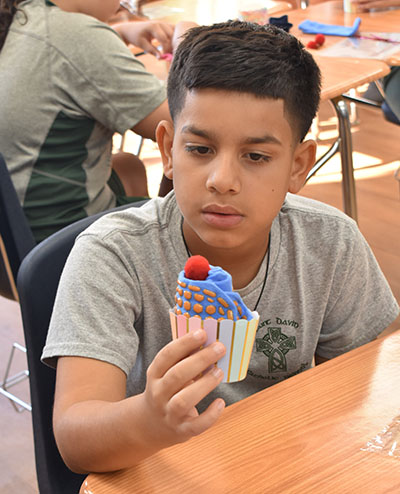 Adrian Rodriquez, a fifth-grader, examines a "sock cupcake" he made for seniors at group homes. 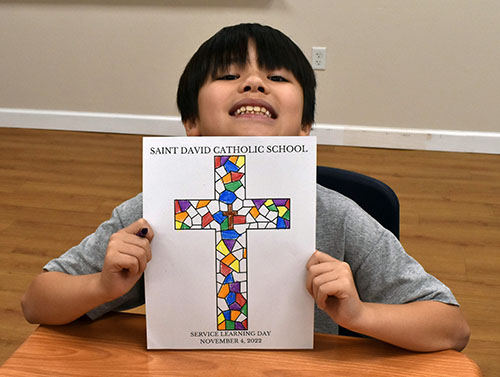 Third-grader Preston Deve shows a stained-glass picture of a cross he made as a keepsake for the Service Learning Day.

Also included was a segment on helping students at St. John XXIII School in Fort Myers, among the places damaged by the brutal Hurricane Ian in late September. Thus far, the school has donated $2,627 for relief; next would come hundreds of books, school supplies and handmade bookmarks.

A mass-produced announcement for the service day quoted St. Teresa of Calcutta: “We can all do small things with great love, and together we can do something wonderful.”

Some of the projects took a creative turn:

All of the materials and craft supplies were bought with contributions from St. David families, Becker said.

Underscoring the religious motive was a prayer card in each gift, bearing the name of a patron saint. For the sock cakes, it was St. Anthony, patron of the elderly; for delivery personnel, St. Gabriel; for the homeless, St. Benedict Joseph Labre.

Eighth-grader Emily Ferreira saw the lessons behind the whimsy. She said it plugged into the example Jesus set, plus the Church’s social teaching on caring for the less fortunate.

“I'm happy to pass down what I've learned over the years, and to be a good example,” said Ferreira, president of the school's Honor Society. “Some people think they can't make a difference, but Jesus helped others and changed lives. I feel we’re here to do that.” 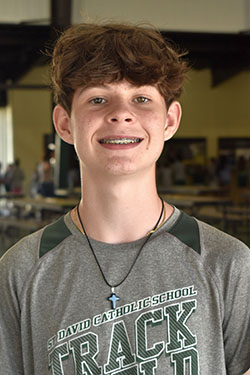 Eighth-grader Connor McGinn said he felt he was giving mothers an alternative to abortion by helping the archdiocesan Respect Life ministry. 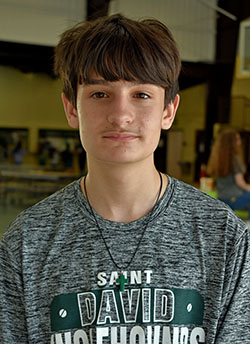 C.J. Wigand, 13, said the cancer segment affected him - he lost his grandmother to the disease when he was 6.

Older students served as emcees and instructors for the various tasks. Some of them remembered projects of previous years and looked forward to being leaders in this year’s Service Learning Day, according to Mayte Hernandez, who coordinated the day.

One of them was eighth-grader Connor McGinn, who helped the younger kids make the diaper “bouquets.” McGinn said he was assigned the job, but “I can't see myself anywhere else. Abortion is killing, and this is like I'm helping give mothers an alternative.”

Another leader was fellow eighth-grader Brianna Pitre, who developed a service ethic a year ago when her grandfather contracted COVID-19 – taking a year to recover. She recalled visiting during his hospital stay and hearing that some patients received no visitors – not even family members.

“It made me feel I should help others who are suffering,” Pitre said. “They may not have families, but they’ll know that someone out there cares for them.”

In the cancer segment, students formed an assembly line and made up “chemo care kits” with items like water, lip balm, puzzles and fuzzy socks. Hernandez explained that the kits were meant to help patients during chemotherapy treatments, which are time-consuming and often leave lips and skin dry. 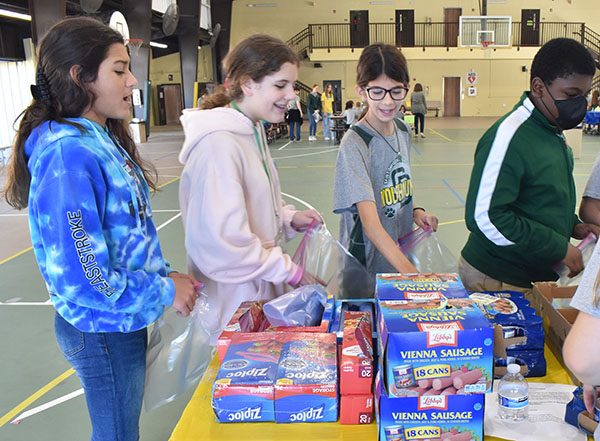 Students at St. David School form an assembly line to assemble food bags for the homeless.

The school added motivation with a grim video from the Leukemia and Cancer Society, showing children describing their experience with the effects of chemotherapy. The St. David kids then competed in pairs, playing the old rock-paper-scissors hand game, to lead prayer for their family members.

The very topic of cancer hit several students personally. C.J. Wigand is 13, but he still remembers his grandmother, who died of cancer when he was 6. She'd taken care of him while his parents worked, playing children's board games like Candyland with him.

“There's a lot of stuff about cancer, but people don’t do anything to help patients,” Wigand said. “I'm glad this school is doing something. and I'm proud to be able to help.”

For school administrators, perhaps most rewarding was when graduates this year asked for advice on holding a service day at their current school, St. Thomas Aquinas High in Fort Lauderdale. They'd enjoyed the projects at St. David School and wanted to replicate them, Hernandez said.

“That fills my heart with joy,” she exclaimed. “They’ll take what they’ve learned forever.” 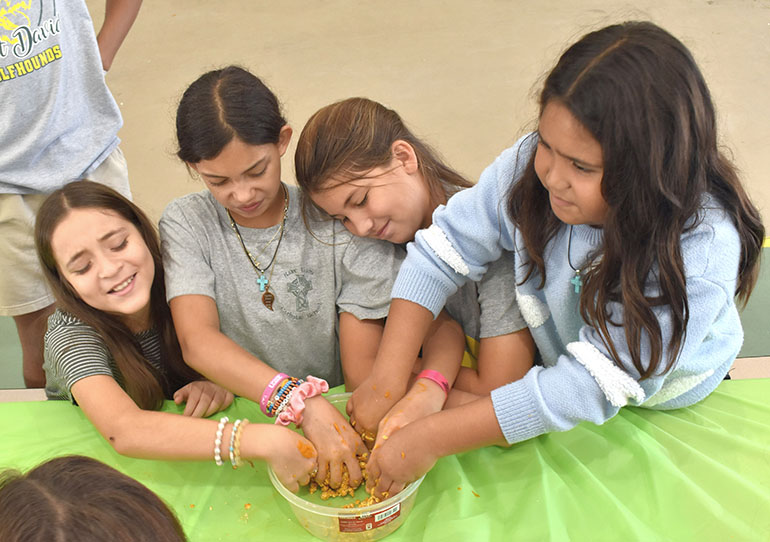