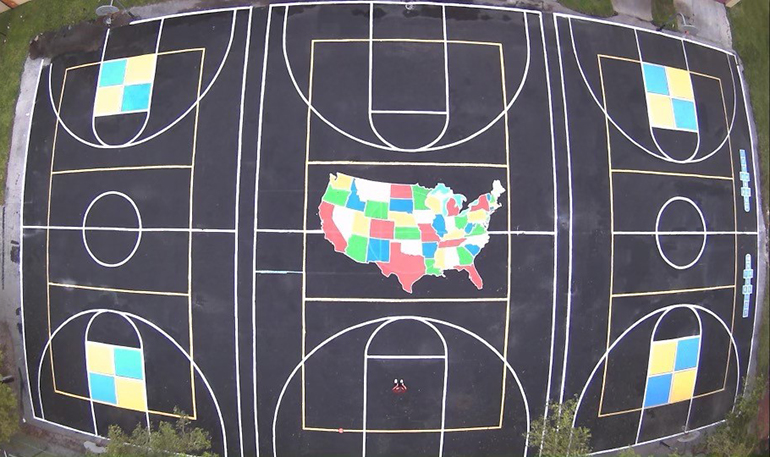 View from above of the colorful new basketball and box ball courts created by Columbus High senior William Dunkley, Jr., at the school he attended as a child, Our Lady of the Lakes in Miami Lakes. 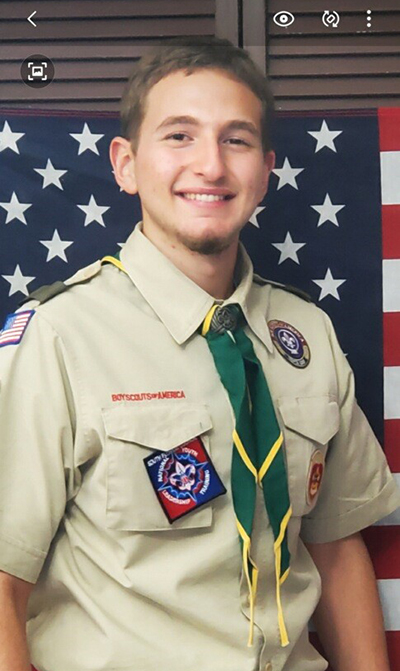 Columbus High senior William Dunkley, Jr., earned the rank of Eagle Scout, the Boy Scouts' highest honor, with a colorful reimagining and refurbishing of the basketball courts at Our Lady of the Lakes in Miami Lakes. 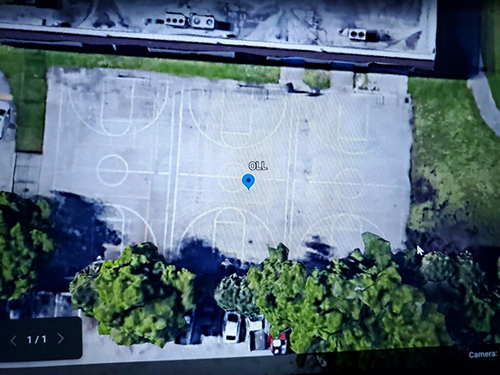 Aerial view of the basketball courts at Our Lady of the Lakes School in Miami Lakes before the refurbishment effort spearheaded by Columbus High senior and newly minted Eagle Scout William Dunkley, Jr. 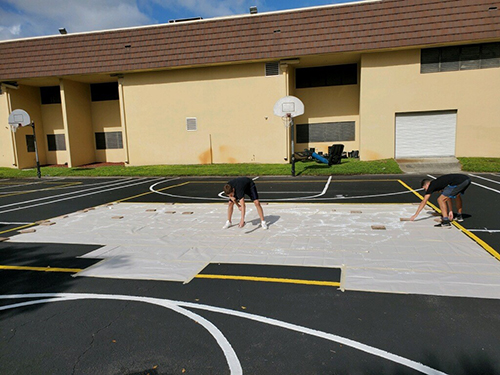 A stencil in 10-foot sections helped Columbus High senior William Dunkley, Jr., create colorful new basketball and box ball courts at the school he attended as a child, Our Lady of the Lakes in Miami Lakes. 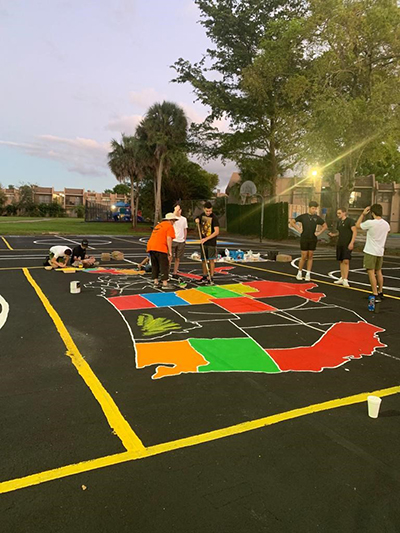 Columbus High senior William Dunkley, Jr., along with friends and their parents, works on his Eagle Scout project, creating colorful new basketball and box ball courts at Our Lady of the Lakes School in Miami Lakes.

MIAMI | William Dunkley Jr., a senior at Christopher Columbus High School in Miami, has earned the Eagle rank of the Boy Scouts of America, the organization’s highest honor, for creatively refurbishing an outdoor sports area at Our Lady of the Lakes School in Miami Lakes.

“I learned a lot about everything from this project,” said William, a Boy Scout with Troop 566 chartered by Our Lady of the Lakes Parish.

William revamped and enhanced the school’s outdoor basketball courts from start to finish. He came up with a plan, created a design, raised funds and recruited and led volunteers to help him with the eight-month mission.

William says he learned a great deal from his community project. “When things come up or when things get in the way of progress, push forward,” said the 18-year-old, who had more than his share of challenges as he worked on his idea to give back to the school, which he attended when he was in kindergarten and first grade.

There were the COVID-19 lockdowns that began in March. Then there was constant bad weather delaying the work. “The weather was the main reason it took so long,” he said.

Our Lady of the Lakes School, which serves students from pre-K to eighth grade, now also features William’s innovative, multipurpose sports court with a 16-foot by 27-foot map of America.

William said he wanted to make the court “look alive and have a multipurpose. Learn and play. I thought it would look cool with bright colors.”

The court was heavily damaged, with the asphalt cracked and in need of repairs. “I wanted to do something cool and crazy,” he said.

William did some research, came up with an idea and contacted a company called Peaceful Playgrounds, which specializes in safe play environments. From the company, established by a former school principal, William obtained supplies, instructions and a stencil in 10-foot sections. He was set to begin.

“I wanted to add an educational aspect,” he said about the project. The map of America is purposely designed without state names to give students the opportunity to learn and pinpoint states simply by their shapes and geographical locations — a way of extending the classroom experience outside.

“A lot of beautiful people came out to help me,” said William, crediting his friends and their parents, who helped after school and on weekends.

“We have always been involved in the community, and I wanted to do something for the school,” he said.

The school posted a thank you on its Facebook page that reads: “Eagle Scouts help our Cheetahs soar on and off the court. Big thank you to our very own Scout William Dunkley OLL Troop 566 for giving back to your OLL family.”

Helen Dunkley supported her son throughout the project, encouraging him along the way. “It was so hard,” she said. “I am proud of him. He was so determined.”

She continues to be very active and involved in the Boy and Girl Scouts of America. Both of her older children were in scouting and her husband was a Boy Scout.

“The scouting program teaches you leadership skills,” said Helen, describing her son as confident and outgoing. “William is comfortable in his own skin. He is a happy guy.”

William will be awarded Eagle Scout honors at a presentation set for some time this year.

The Eagle Award is a big achievement. It reflects a great deal of hard work to meet a number of rigorous requirements. According to Scouting Magazine, only 8% of eligible Boy Scouts earned the Eagle Scout rank in 2019.

In total, William has earned 34 merit badges as a member of Our Lady of Lakes’ Boy Scout Troop 566.

“Scouting has helped me so much,” said William. “It has helped me to learn how to be a leader. It has involved me in service in the community. If it wasn’t for the Scout organization, I would not be the person I am.”

Articles(34)
Our Lady of the Lakes School