Immaculata-La Salle sailing toward a championship 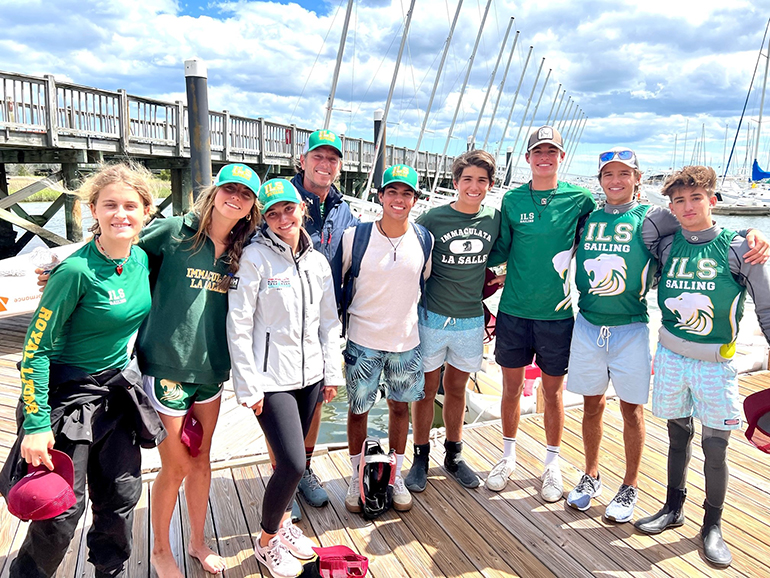 Immaculata_La Salle's sailing team pose for a photo with their coach, Maru Urban, after their winning performance at the SAISA Team Racing District Championship at the College of Charleston in South Carolina the weekend of May 7, 2022.

CHARLESTON, South Carolina | Immaculata-La Salle’s sailors dominated the SAISA Team Racing District Championship at the College of Charleston in South Carolina the weekend of May 7, 2022, earning a bid to the Team Racing Nationals in Houston, Texas, for the first time in school history.

Despite treacherous conditions, the Royal Lions finished the regatta with just one loss (7-1). Racing was called early due to high winds after the second round saw many experienced sailors capsize.

This 3 vs. 3 racing format demands top notch boat handling skills, a command of the complex racing rules, and quick thinking. Team racing is a combination of roller derby and bocce ball with the strategy of chess, as a team of three boats races and utilizes play calls against another team of three boats to work their way around a race course. The team with the lowest combined finishes wins that race.

Immaculata-La Salle had never won this event before, and the victory solidifies the high school’s dominant position in the country’s most competitive SAISA sailing district. The Royal Lions are now the favored team going into nationals.

The team’s goal is to bring home both national championships.