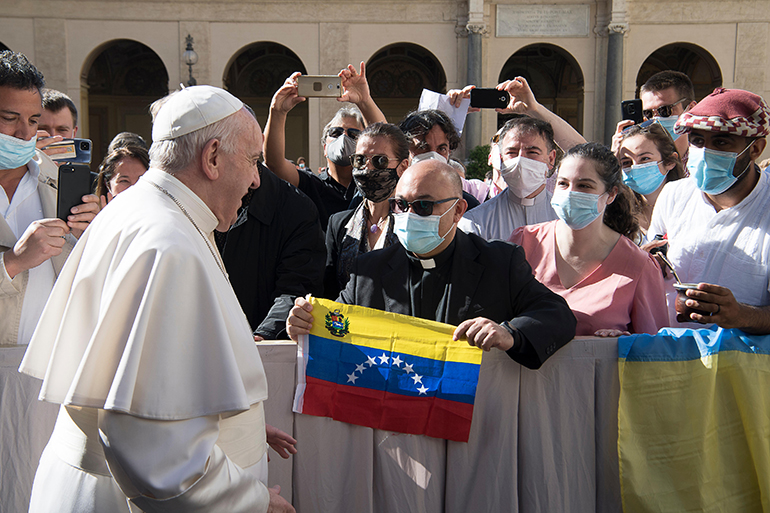 Pope Francis greets a group from Venezuela during his weekly general audience in the Paul VI Hall at Vatican City on Aug. 25, 2021.

VATICAN CITY | Pope Francis addressed the Vatican financial scandals in a sit-down radio interview that aired Sept. 1, 2021, saying he hoped that Cardinal Angelo Becciu is innocent of the charges against him.

“I hope with all my heart that he is innocent. Besides, he was a collaborator of mine and helped me a lot. He is a person whom I have a certain esteem as a person, that is to say that my wish is that he turns out well ... In any case, justice will decide,” the pope told Carlos Herrera, a journalist at Spain’s COPE radio station.

Cardinal Becciu is one of 10 defendants in the Vatican’s largest trial for financial crimes in the modern era, after the pope changed the norms to allow cardinals to be tried by lay judges. Cardinal Becciu is accused of embezzlement and abuse of office, but vehemently denies any wrongdoing.

In the 90-minute interview, his first since undergoing colon surgery, Pope Francis spoke about his recent restrictions on the Traditional Latin Mass, the withdrawal of U.S. forces from Afghanistan, the Vatican-China deal, euthanasia, and abortion, as well as other pressing topics.

“I am not afraid of transparency or the truth. Sometimes it hurts, and a lot, but the truth is what sets us free,” the pope said when asked about corruption at the Vatican.

“Let’s hope that these steps we are taking in Vatican justice will help to make these events happen less and less... Yes, you used the word corruption and, in this case, obviously, at least at first sight, it seems that there is corruption,” he said.

The pope also addressed clerical sexual abuse and questioned why governments were not making greater efforts to eliminate child pornography.

“Abusing a boy to film an act of child pornography is demonic. It cannot be explained without the presence of the devil,” the pope said.

“I sometimes wonder how certain governments allow the production of child pornography. Let them not say they don’t know. Nowadays, with the intelligence services, everything is known,” he said. “A government knows who in its country produces child pornography. For me, this is one of the most monstrous things I have ever seen.”

Pope Francis also praised Cardinal Seán O’Malley of Boston for his work in establishing the Pontifical Commission for the Protection of Minors.

“I would like to pay tribute to a man who began to speak about this with courage, even though he was a thorn in the side of the organization, long before the organization was created on this subject, and that is Cardinal O’Malley. It fell to him to settle the matter in Boston and it was not easy.”

Pope Francis described the publication of Summorum Pontificum, a 2007 apostolic letter lifting restrictions on the celebration of Mass according to the 1962 Missal, as “one of the most beautiful and human pastoral things of Benedict XVI, who is a man of exquisite humanity.”

Explaining why he issued the motu proprio Traditionis custodes in July curbing celebrations of the Traditional Latin Mass, he noted that the Vatican Congregation for the Doctrine of the Faith undertook a survey of the world’s bishops in 2020.

“Then the subject was studied and based on that, the concern that appeared the most was that something that was done to help pastorally those who have lived a previous experience was being transformed into ideology. That is, from a pastoral thing to ideology,” he explained.

“So we had to react with clear norms. Clear norms that put a limit to those who had not lived that experience. Because it seemed to be fashionable in some places that young priests would say ‘oh, no, I want...’ and maybe they don’t know Latin, they don’t know what it means. And on the other hand, to support and consolidate Summorum Pontificum.”

He continued: “I did more or less the outline, I had it studied and I worked, and I worked a lot, with traditionalist people of good sense. And the result was that pastoral care that must be taken, with some good limits.”

“For example, that the proclamation of the Word be in a language that everyone understands; otherwise it would be like laughing at the Word of God. Little things. But yes, the limit is very clear.”

Summing up the intention of his motu proprio, he commented: “If you read the letter well and read the decree well, you will see that it is simply a constructive reordering, with pastoral care and avoiding an excess of those who are not...”

When asked about the withdrawal of the United States and its allies from Afghanistan, the pope said that “all eventualities were not taken into account.”

Pope Francis said that he was touched by something German Chancellor Angela Merkel said on the subject in Moscow on Aug. 20, but his paraphrased quotation was actually of words spoken by Russian President Vladimir Putin, according to AP.

“It is necessary to stop the irresponsible policy of enforcing its own values on others and attempts to build democracy in other countries based on outside models without taking into account historic, ethnic and religious issues and fully ignoring other people’s traditions,” Francis said, summarizing the quotation.

“Concise and conclusive. I think this says a lot; and everyone can interpret it as they wish. But there I felt a wisdom in hearing this woman say this.”

The pope also said that the Vatican Secretariat of State was helping — or at least offering to help — with the situation in Afghanistan.

“[Vatican Secretary of State] Cardinal Parolin is really the best diplomat I have ever met,” the pope added.

Discussing the provisional agreement between the Holy See and China, first signed in 2018 and renewed in 2020, the pope said: “China is not easy, but I am convinced that we should not give up dialogue. You can be deceived in dialogue, you can make mistakes, all that... but it is the way. Closed-mindedness is never the way.”

He continued: “What has been achieved so far in China was at least dialogue ... some concrete things like the appointment of new bishops, slowly ... But these are also steps that can be questionable and the results on one side or the other.”

The pope added that Cardinal Agostino Casaroli, the Vatican Secretary of State for the first 10 years of John Paul II’s pontificate, was a model of Vatican diplomacy and spoke highly of his book “The Martyrdom of Patience.”

“Today, somehow we have to follow these paths of dialogue step by step in the most conflictive situations. My experience in dialogue with Islam, for example, with the Grand Imam Al-Tayyeb was very positive in this, and I am very grateful to him,” he said, referring to the Grand Imam of al-Azhar in Egypt, with whom the pope signed a declaration on human fraternity in 2019.

In the interview, the pope also strongly defended the Church’s opposition to euthanasia and abortion.

“We are living in a throwaway culture. What is useless is discarded. Old people are disposable material: they are a nuisance. Not all of them, but in the collective unconscious of the throwaway culture, the old... the most terminally ill, too; the unwanted children, too, and they are sent to the sender before they are born,” he commented.

“What the Church asks is to help people to die with dignity. This has always been done,” he said.

“And with regard to the case of abortion ... I say this: any embryology manual given to a medical student in medical school says that by the third week of conception, sometimes before the mother realizes [that she is pregnant], all the organs in the embryo are already outlined, even the DNA. It is a life. A human life. Some say, ‘It's not a person.’ It is a human life.”

Asked about the devil, a theme that the pope has often addressed since his election in 2013, Francis highlighted the danger of what he called “polite devils.”

“The devil runs around everywhere, but I’m most afraid of the polite devils. Those who ring your doorbell, who ask your permission, who enter your house, who make friends,” Francis said.

“But Jesus never talked about that? Yes, he did ... when he says this: when the unclean spirit comes out of a man, when someone is converted or changes his life, he goes and starts to walk around, in arid places, he gets bored, and after a while he says ‘I’m going back to see how it is,’ and he sees the house all tidy, all changed. Then he looks for seven people worse than him and enters with a different attitude,” he said.

“That is why I say that the worst are the polite devils, those who ring the doorbell. The naivety of this person lets him in and the end of that man is worse than the beginning, says the Lord. I dread the polite devils. They are the worst, and one is very much fooled.”

Pope Francis also told the story behind why he has not watched much television in the past 30 years.

“I made a promise on July 16, 1990. I felt that the Lord was asking me to do so, because we were in community watching something that ended up tawdry, unpleasant, bad. I felt bad,” he said. “It was the night of July 15. And the next day, in prayer, I promised the Lord not to watch it.”

The pope added that he does still tune in for important events, such as when a president takes office or when there is a plane crash. “But I am not addicted to it,” he said.

Pope Francis said that life had returned to normal since he underwent a colon surgery on July 4 that required him to remain hospitalized for 11 days.

“It is the second time in my life that a nurse has saved my life,” the pope said.

“He saved my life. He told me: ‘You have to have surgery.’ There were other opinions: ‘Better with antibiotics...’ but the nurse explained it to me very well. He is a nurse from here, from our health service, from the Vatican hospital. He has been here for 30 years, a very experienced man,” he said.

Italian media identified the nurse as Massimiliano Strappetti, who has worked in the Vatican since 2002, after eight years serving in the intensive care unit at Rome’s Gemelli Hospital.

The pope explained that his surgery had been pre-scheduled and that he has been eating regularly now after some weeks of recovery.

The pope also addressed the recent rumors about his resignation, saying that he had no idea about the rumors until someone told him.

“I read only one newspaper here in the morning, the newspaper of Rome Ã¢â¬Â¦ I read it quickly and that’s it ... And I do receive the report about some of the news of the day, but I found out much later, a few days later, that there was something about me resigning,” he said.

“Whenever a pope is ill, there is always a breeze, or a hurricane, of conclave.”