Served as organist in many archdiocesan churches, most recently St. Gregory

Ginny Matheo may have surrendered Michael Derrick to God’s care. But like others who knew him over his decades of music ministry, she’ll still miss him.

“We knew this was coming,” she said of the stroke that claimed his life on June 18. “But when I heard, my heart broke and I cried.”

Derrick, director of music for nine years at St. Gregory parish in Plantation, died at Jackson South after a massive stroke. He was 69. 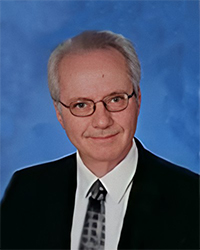 Michael Derrick, 69, died June 18, 2021 after suffering a stroke. He had served as director of music at St. Gregory the Great in Plantation for the past nine years, and several other archdiocesan parishes dating back to the 1970s.

Derrick guided liturgical music in South Florida for more than 40 years. Among his jobs were music director for the archdiocese, associate director of the archdiocesan Office of Worship, and organist and music instructor at St. John Vianney College Seminary in Miami. He also served at five churches around the archdiocese, including St. Gregory.

While honoring his musical achievements, though, friends and colleagues this week also remembered Derrick’s personal qualities: warmth, kindness, gentle humor, a commitment to excellence – in people he ministered with as well as himself.

“He had an aura,” said Matheo, a lector and Eucharistic minister at St. Gregory. “When you spoke to him, you could see the sweetness in his soul.”

Andrea Heighes-Revilla, a cantor at St. Gregory, was affected in much the same way by Derrick’s death. She was teaching at a theater camp in Davie when an usher called with the news.

“I kept it in while I was teaching,” said Heighes-Revilla, a cantor for two decades. “But then I went to the bathroom and cried.”

Raised in Church Hill, Tennessee, Derrick seemed born and bred for his art: His parents, who were Lutheran, both had backgrounds in music instruction and ministry. He converted to the Catholic faith at Immaculate Conception Church in Hialeah.

He changed churches but not his love for music. At various times, he worked as organist not only at St. Gregory but at St. Catherine of Siena in Miami, St. James in North Miami, Little Flower in Coral Gables and Our Lady of the Holy Rosary-St. Richard, Palmetto Bay.

During his archdiocesan-level assignments, Derrick kept musicians updated on changes in liturgical norms such as new translations. He conducted an inter-parish choir at the archdiocesan millennium celebration at the Miami Beach Convention Center. And he helped organize a chorale of music directors around the archdiocese.

“He was an excellent organist and a good conductor,” said Patricia Zeiler, a former member of the archdiocesan worship commission. “And I can't ever remember him raising his voice. Even when things got tense, he was flawlessly calm.”

Among Derrick’s gifts was blending music of different ethnic groups, according to Father Juan Sosa, former director for the Office of Worship. “He was one of the first to merge different styles and cultures into one liturgical celebration.”

Another gift of Derrick’s: building skills in others, then taking a back seat to them.

“He wasn't larger than life,” said Father Michael Davis of St. Gregory. “He did high-profile things in an unassuming way. He never wanted to be the star. He trained a lot of young adults to be cantors.”

Andrea Heighes-Revilla saw that quality as he trained her in musical worship at St. Gregory. “He helped my voice grow into what it is now. And he never wanted the credit. He always wanted the singers to shine.”

Even severe illness several years ago didn't stop Derrick from returning to the music ministry at St. Gregory – or from showing a cheerful nature. One of his quips: “Don’t do anything to make my blood pressure go up!”

“He wanted us to feel better that he was feeling better,” Heighes-Revilla said. “He always thanked us for participating. He was always saying, ‘Have I thanked you enough?’ ”

Derrick is survived by Brenda, his wife of 34 years, as well as his brother, Mark, and a sister.

A funeral Mass is scheduled for 11 a.m. Friday, June 25, at St. Gregory. At least 10 priests from Derrick’s previous churches and ministries have already said they plan to attend, according to Father Davis.

“That's a testimony to Michael’s relationship with them,” he added. “Usually, that many priests show up only for another priest.”

Rhona Gift Hunter - 06/25/2021 08:40 AM
Dear Michael, I do not have sufficient words to describe the indescribable loss that I feel at your passing. As a cantor, together we helped to create beautiful worship and musical memories with the choir, special events at the church, and my own "dream come true" concert at St.Gregory's in 2017. You taught me so many new hymns and songs in the 9 years at the parish and have I have always appreciated your depth of knowledge regarding liturgical music, but most of all your always ready and quick sense of humor. I will miss you, my friend. To your wife, Brenda, and extended family members - thank you for sharing Michael with us here at St. Gregory's these past 9 years. Please accept my deepest sympathies. Pie Jesu Domine, dona eis requiem sempiternam.

Michael Kramer - 06/23/2021 10:24 AM
I am deeply saddened to hear of his passing. I sang under his direction for several years at what was then St Richards in Palmetto Bay. Michael was a mentor, friend, and a true talent. We shared many in depth conversations about church music and liturgy after he discovered me, his youngest choir member, plucking out the Dies Irae on the piano. He tried his best to meet everyone's musical needs with regard to the liturgy and I truly appreciated that. I am unable to attend his funeral but I will seek to have a Requiem High Mass sung for him and will be honored to sing the ancient texts of the church pleading for the salvation and rest of a great church musician. I met his wife once. I wish there was a way I could convey my condolences. Brenda, if you are reading this, I'm so sorry. Be assured of my prayers for his repose and for your peace and comfort. Michael will always be one of the greatest musicial influences and instructors in my life.

PAUL J SCHLACHTER - 06/20/2021 11:20 PM
I am among those who will miss Michael very much. I took part in special choirs that he led, and showed him some mass compositions for his feedback. When I last saw him, he made time to meet me after a mass at St. Gregory in December 2019. As our churches move in the direction of performance music, it will be more difficult to find musicians so committed to active participation by all the people.