MIAMI | Funeral services will be held Thursday, April 29, 2021 at St. Katharine Drexel Church in Weston for Father John Fink, a retired archdiocesan priest who died April 24, a month shy of his 50th anniversary as a priest. 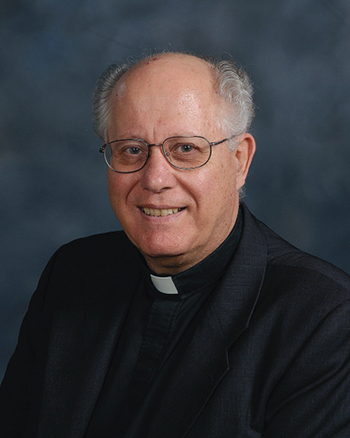 Father Fink was 80 and had been receiving rehabilitation at St. John’s Nursing Center in Fort Lauderdale, having been in and out of the hospital the last few months. He had retired from fulltime ministry in July 2010 but continued his involvement with the English-speaking Catholic Charismatic Renewal, where he had served as spiritual director since 2004.

He also served as spiritual director of the Broward Curia of the Legion of Mary from 1978 to 1985. From 1992 until his retirement, he served as chaplain at Broward General Hospital.

“It is a beautiful coincidence that this fine shepherd passed away on the eve of Good Shepherd Sunday,” wrote Father Alfredo Hernandez, rector of St. Vincent de Paul Regional Seminary in Boynton Beach, in an email to seminary supporters.

“Father Fink was a staunch supporter of St. Vincent de Paul Regional Seminary, of which he is a 1971 graduate, and was a familiar face at all our events,” Father Hernandez wrote. “Perhaps more importantly, he was a great support and spiritual father to a number of our faculty and seminarians.”

He noted that Father Fink assisted at Ruthenian Byzantine parishes, having been trained to celebrate the Eastern Rite Mass during his early years as a priest. He was also a lay discalced Carmelite.

“He retired in 2010 but was very active in ministry in the years preceding his death,” Father Hernandez added. “In spite of significant handicaps, he worked tirelessly for the faithful at the parishes of St. David, St. Malachy, St. Andrew, St. Bonaventure, and St. Katharine Drexel.”

“Father John was very spiritual, very faithful,” said Father Dominick O’Dwyer, who retired as pastor of St. Malachy in June 2019. He recalled that Father Fink helped at a lot of parishes. “We had him at St. Malachy for many, many years.”

Father O’Dywer first met Father Fink when they worked together for four years at St. Bartholomew in Miramar. Father O’Dwyer was the pastor, Father Fink his associate.

Father O’Dwyer said the Charismatic Renewal had been Father Fink’s “passion for a long time.”

“He also was instrumental in promoting the Tridentine Mass,” Father O’Dwyer said. Father Fink introduced it at St. Malachy and also celebrated it on weekdays at St. Bonaventure in Davie.

“This man has impacted literally thousands because of his ministries,” said Sandi LeBel, former associate director of the archdiocesan Respect Life Office. Father Fink had been her spiritual director since 2006.

She noted that he had been very involved and supportive of the respect life ministry and its pregnancy help centers. He also was a Knight of Columbus and served as spiritual director for the Broward chapter of Magnificat, a ministry to Catholic women.

“He is so beloved,” LeBel said. “The people who knew Father John and those he ministered to, they all felt like they were his spiritual sons and daughters.”

John Sause, a retired professor of philosophy and health law at Barry University, was one of Father Fink’s lifelong friends. They both served on the ethics committee at Broward General.

“It is extremely difficult to encapsulate the personality and magnitude of his fifty years of service to his beloved Jesus and the Church,” Sause said. He described Father Fink as “indefatigable” in fulfilling the promise he made on the day of his ordination. “The archbishop inquired, ‘Are you resolved to consecrate your life to God for the salvation of his people and to unite yourself more closely every day to Christ the High Priest, who for us offered himself to the Father as a perfect sacrifice?’ To which John answered emphatically, ‘I am, with the help of God,’” Sause said.

Born July 2, 1940 in Cleveland, Ohio, Father Fink graduated from the University of Dayton with a bachelor’s degree in education. He obtained a master’s in theology from St. Vincent de Paul Seminary in Boynton Beach and was ordained May 29, 1971 for the Archdiocese of Miami.

The viewing will take place between 9 and 10:45 a.m. at St. Katharine Drexel, 2501 South Post Road, Weston. Archbishop Thomas Wenski will preside at the funeral Mass at 11 a.m., which will be livestreamed on St. Katharine's YouTube channel.

Father Fink is survived by his brothers, David and Thomas and their wives, all of whom live in Ohio, as well as a number of nieces and nephews.

Lesley Vaitekunas - 04/29/2021 11:13 PM
Fr. John helped us immensely at San Isidro. I have a little story to tell about him and his "gifts." He used to celebrate healing Masses at S.I. and at one of Fr. John's healing Masses he prayed over me. He stepped back and said "Oh Lesley I don't know if I can tell you this, but I keep getting "It is over, it is over and it is in regards to the Clown Ministry." After Mass I told him that I had been praying about whether I should resign or not and then he had these words for me, so it confirmed for me that it was time to resign and God used him to let me know it was O.K.to do so! Praise GOD! I was the founder of the Sonlight Clown Ministry for 12 years and for a while had felt that it was time to resign. Fr. John's gift helped me to do so!

JosephJoe oHara - 04/29/2021 08:09 PM
Gog bless you and continue to hold u in his arms giving strength for those who beilivef as need strength to carry on Fr David watch over your servent

Lourdes del-CALVO - 04/29/2021 05:11 PM
To the Brothers and Family of Fr. Fink, I want to express my deepest sincere Sympathy for your great loss, know that you all now have a Saint in Heaven. I know this is the way I feel, not all the Saints are known to everyone. Fr. Fink for me and for many at St. Mark the Evangelist Roman Catholic Church in Southwest Ranches, he meant much to us, he gave us Spiritual Guidance and once a week, whenever he could because of his health issue he would teach and guide us on Spiritual Warfare. Thank you Fr. Fink for your Life of total Devotion to Jesus and His Flock, may you RIP, we all will miss you. Lourdes [email protected]