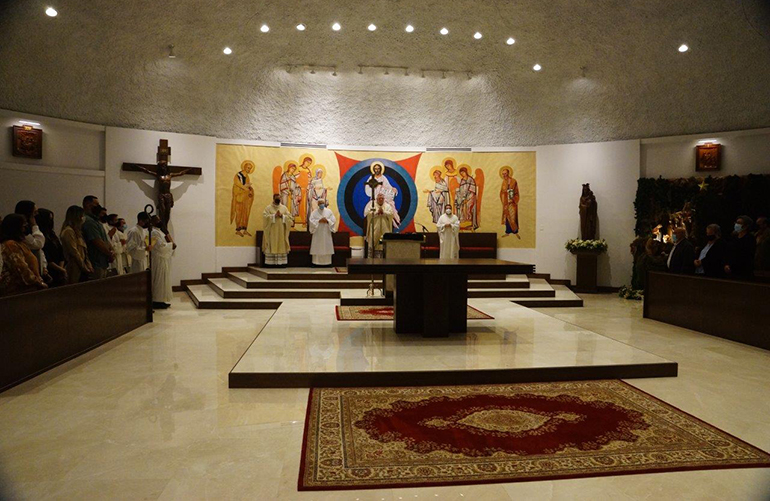 View of the newly refurbished worship space at Mother of Christ Church in Miami, which was blessed by Archbishop Thomas Wenski during a Mass Jan. 1, 2021.

MIAMI | 2020 was a terrible year for the whole world, marked by illness and death. But for Mother of Christ Church in Miami, it was “a year of grace,” said the parish administrator, Father Jorge Carvajal-Niño.

And that grace culminated on the first day of 2021, when Archbishop Thomas Wenski consecrated the church’s new altar and blessed the refurbished worship space during a Mass marking the solemnity of Mary, Mother of God.

“It’s true there was much pain, much suffering, but for me and the parish it has been a year of grace from the Lord. We have seen his consolation and his providence throughout this time,” said Father Carvajal-Niño. 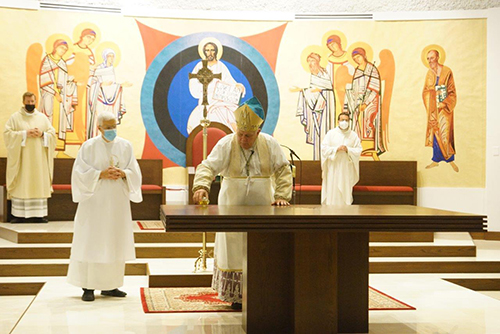 Archbishop Thomas Wenski pours oil of chrism on the new altar at Mother of Christ Church in Miami, Jan. 1, 2021. He also blessed the refurbished worship space. Behind him is a painting of Christ Pantocrator which will also be getting a touch-up soon. 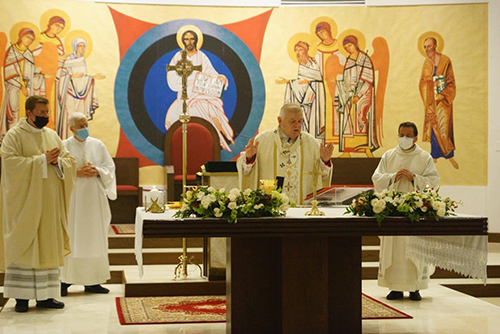 Archbishop Thomas Wenski celebrates Mass Jan. 1, 2021 at Mother of Christ Church in Miami, where he consecrated the new altar and blessed the refurbished worship space.With him, from left, are Father Emanuele De Nigris, rector of Redemptoris Mater Seminary in Hialeah, whose seminarians assist at the parish; Deacon Enrique Ferrer; and parish administrator, Father Jorge Carvajal-Niño. Behind them is a painting of Christ pantocrator which will also be getting a touch-up soon.

Named administrator of Mother of Christ about three-and-a-half years ago, he found many of the parish facilities needed upkeep. He began by renovating the parish hall and offices. Then the chapel, which was blessed by Archbishop Wenski at the end of May — his first public Mass at the end of South Florida’s lockdown. Finally, Father Carvajal-Niño focused on the church — in reality the parish’s original multipurpose building, populated with chairs and partitioned into five areas.

“It was very nice but it didn’t look like a church,” said the priest, a native of Colombia.

What began as a project to install pews turned into a complete refurbishing. To gain space, two large cry rooms were reduced to a smaller one. Tile floors were replaced with marble. The presbytery, or sanctuary area, got a new altar, ambo, and statues of Jesus and Mary, all carved out of wood. New Stations of the Cross were installed, also carved out of wood. The central ceiling was redone with new lighting added. Three new wooden exterior doors were installed. And the entrance lobby got air conditioning.

The space now has a capacity for 600 people, although only about 200 attended the Jan. 1 Mass — representatives of the parish ministries and benefactors who made the refurbishment possible.

They were the manifestation of God’s providence, Father Carvajal-Niño said: donors who seemed to come forward just when he needed them.

“I was surprised at the number of anonymous donors,” he said. “People were donating and donating.”

“We could say this renovation is a monument to the providence of God,” Father Carvajal-Niño said.

This story has been corrected: The proper name of Mother of Christ's administrator is Father Jorge Carvajal-Niño, not Carvajal-Nieto as in the original posting. Also, the church's chapel was blessed at the end of May, not June as originally posted. 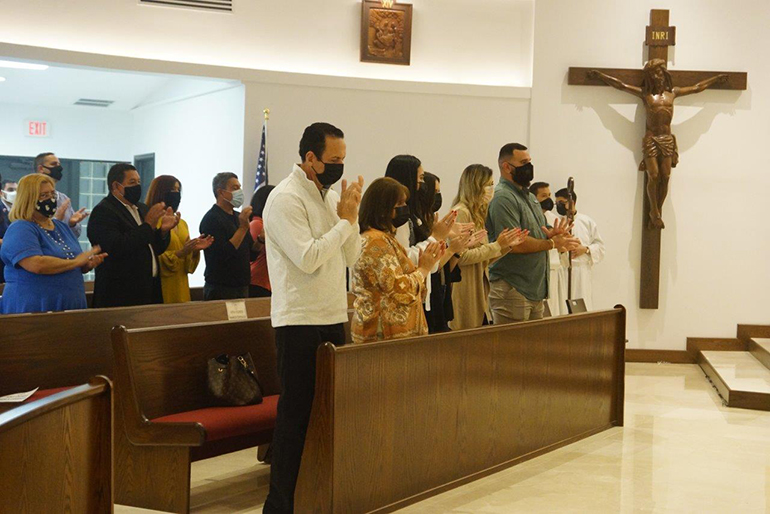 Parishioners applaud during the Mass where Archbishop Thomas Wenski consecrated the new altar at Mother of Christ Church in Miami, Jan. 1, 2021. He also blessed the refurbished worship space. Visible at rear is the new life-size crucifix carved out of wood as well as one of the new wood-carved Stations of the Cross.