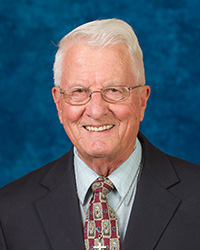 Brother Donald Neff, who worked at Chaminade-Madonna College Prep from 1990-2005 and now lives with the Marianist community in Hollywood, is marking 70 years of religious profession in 2020.

HOLLYWOOD | Marianist Brother Donald Neff, who served at Chaminade-Madonna College Preparatory for 15 years and is currently a member of Nativity Parish in Hollywood, is marking 70 years of religious profession.

From 1990 to 2005, he served as alumni development director at Chaminade-Madonna, coordinating special events and serving as community relations coordinator. He returned to Hollywood after his retirement in 2013 and continued to represent the Marianist mission office as a preacher until 2016.

He is currently a parishioner at Nativity and resides at the Marianist community in Hollywood, where he continues to support the mission by maintaining phone and written communication with donors from Florida.

“I am very grateful and humbled for the blessing of being invited to become a member of Mary’s Special Family, the Marianists," Brother Neff said. "Mary’s call was special and allowed me to be an entrepreneur in education, work with youth via education and school administration, and witness my commitment to the world community. The realization of the blessings I received by being invited to become a Son of Mary continually vitalizes and energizes me."

Paulette - 09/17/2020 07:42 PM
Respect, energetic,, prayerful, driven, committed, community, devoted, humble, intelligent, funny, allegiant, just, unconditional, peace-filled, memorable, detailed, organized, health-minded, focused, selfless, hopeful, fearless, listener, mentor, forgives, human. “All things good” is a deserving mantra for this holy man who has traveled the continents to evangelize and share the gospel and love of Christ, educate the world on the important role of Mary and pray for the spirit that lives within us all.

Gary Blandino - 09/17/2020 10:35 AM
Congratulations on your Anniversary Brother Don. Being privileged to work with you since your beginnings at Chaminade in 1990, your faith, humility and enthusiasm have taught me many things. Only disagree with the statement of your "retirement" in 2013, for like the Energizer Bunny you keep on going and going. God Bless You and Thank you for all you have done for the Chaminade Madonna family. Gary Blandino