The Word made bronze 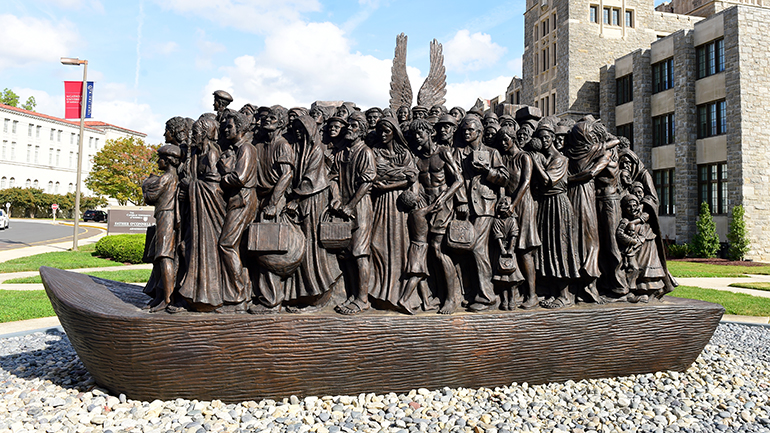 After its Miami visit and subsequent tour of the U.S., the "Angels Unawares" sculpture will have a permanent home at Catholic University of America in Washington, D.C.

MIAMI | Beginning next week, South Floridians will see their own faces in bronze — in a massive sculpture that has been blessed by Pope Francis.

Titled "Angels Unawares," the artwork shows a 20-foot-long boat crowded with migrants and refugees from various lands. The sculpture, on a tour of American cities, is planned for a Miami visit from Feb. 9, 2021 — when the statue will arrive and be installed — through April 8, 2021. It will be on display in Bayfront Park, at the entrance to Bayside, just south of the Torch of Friendship.

The sculpture is a replica of an artwork by Canadian sculptor Timothy Schmalz that has stood in St. Peter's Square since Sept. 29, 2019, the World Day of Migrants and Refugees. The Holy Father commissioned the piece to call attention to their plight, and to their contributions to society. 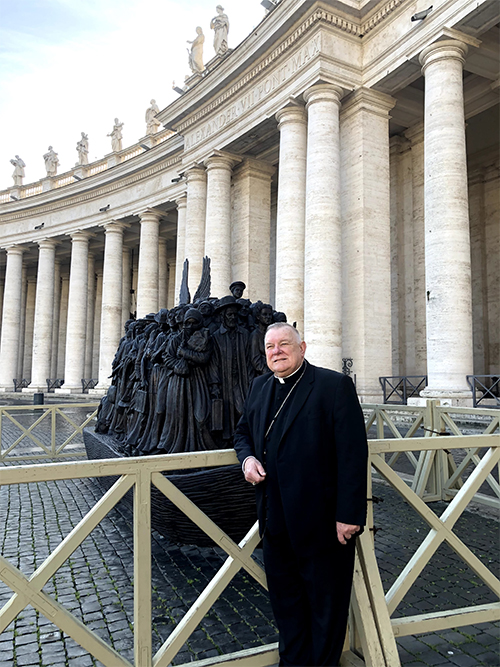 Archbishop Thomas Wenski poses in front of the Angels Unawares sculpture on display in St. Peter's Square during his February 2020 visit to Rome for his ad limina visit with Pope Francis. A replica will be on display at Miami's Bayfront Park from Feb. 9 to April 8, 2021.

Among the 140 sculpted faces are Africans who were forced onto slave ships; Vietnamese boat people fleeing a Marxist regime; a Cherokee on the Trail of Tears; Jews scarred by the Holocaust; Irish immigrants escaping the 19th century Potato Famine; and Syrians seeking a more peaceful home than their homeland. Even the Holy Family is in the crowd, identifiable only by St. Joseph's toolbox.

And much of the sculpture seems to reflect the faces of South Florida. That’s the message of its creator, Canadian sculptor Timothy Schmalz.

"I placed the figures with Europeans from previous generations shoulder to shoulder with contemporary migrants," Schmalz said in a phone interview. "We're all immigrants anyway, but this sculpture shows that. It's celebrating the idea that we all came from someplace else."

Amid the figures, stretching 11 feet high, are the wings of an angel. It's a visual version of the Bible verse Hebrews 13:2: "Do not neglect to show hospitality to strangers, for thereby some have entertained angels unawares."

"Angels Unawares" comes to South Florida after visiting Los Angeles, Boston, New York and Atlanta. After its month in Miami, the 3.5-ton sculpture will go to other U.S. cities until finally settling in its permanent home, Catholic University of America in Washington, D.C.

A PLACE FOR STARTING OVER

The sculpture and its message could hardly fit South Florida better, agreed Paul George, resident historian of Miami. Immigration has been "the single most important element in the development of Miami and South Florida in the last 60 years," he said.

For generations, people have come to South Florida for freedom to live, worship and prosper. Whether they were Cubans and Haitians fleeing oppression, Caribbean islanders seeking opportunity, or Northeasterners just following the sun, this area has held out the promise for a better life. And for the many Catholics among them, the Church has striven to welcome, shelter and nourish them spiritually.

"This has always been a place for starting over," historian Paul George said. "That goes back at least to the beginnings of Miami."

Even in 1894, he said, businesses like that of the Burdines family moved here from Orlando, Titusville and Polk County after they were wiped out in Central Florida's wintertime freezes of 1894-1895. 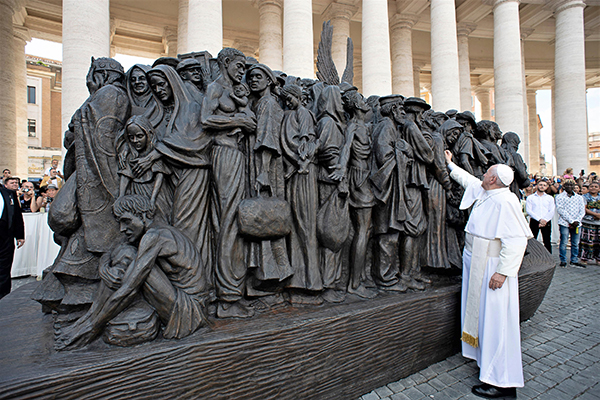 Pope Francis blesses "Angels Unawares," a sculpture to be shown in Miami February 2021.

The warm winters also drew thousands of military personnel who stationed here during World War II. Said George: "They said, 'Is it like this in January? I'm not going back to New Jersey!' So they got their families and came back."

As the southernmost major city of the continental U.S., Miami had long hoped to develop business ties with Latin America. George noted that the Torch of Friendship, an international monument facing Biscayne Boulevard, was erected in 1960.

But it wasn't until 1959, when Fidel Castro imposed a Marxist dictatorship on Cuba, that big changes began. By January 1960, Cuban refugees in Miami numbered 100,000, then 250,000 a year and a half later. The historic Freedom Flights began in 1965, preceded by the Operation Pedro Pan children's program and followed by the Mariel Boatlift.

"Miami was the port of entry for the biggest influx of refugees into the United States in half a century," according to the article A Many-Splendored People by the late Msgr. Bryan O. Walsh — who ran Pedro Pan, bringing 14,000 children out of Cuba under the Church's care.

And the more people came, the more got the idea to come, George said. Haitians came en masse from the 1970s to the 1990s, fearful of the Duvaliers. Peruvians followed in the 1980s and 1990s, as Shining Path guerrillas began attacking. Colombians and Venezuelans came in the 1990s, one group fleeing insurrection, the other repelled by a dictator. 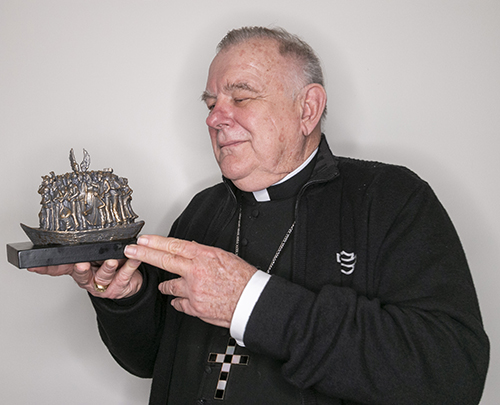 Archbishop Thomas Wenski holds a miniature replica of the Angels Unawares sculpture by Canadian artist Timothy Schmalz. A full-size replica of the immigration-themed artwork will be on display in Miami beginning Feb. 9, 2021.

Non-Christians, too, found Miami attractive. Jews started their first local synagogues in the 1930s and became nearly the majority in Miami Beach by the 1950s. Other large Jewish communities grew in Broward in the 1970s, then Palm Beach County a decade later.

In the 1990s, mosques and Hindu temples began rising around South Florida. Many of their founders were from places like India, Pakistan, Guyana and Trinidad. They'd come as young college students, hoping to make money and retire rich back home. Along the way, they realized they'd become Americans. Then they built their own houses of worship.

"South Florida became a mosaic of peoples from different backgrounds," Paul George said. "It's a mosaic of faiths also."

He credited Catholic immigrants with saving many of the parishes in the archdiocese. "In one church after another, so many congregants are refugees, or immigrants, or children or grandchildren, of people who have come from abroad. Without them, a lot of churches would closed."

He suggested that the immigrants have even affected Catholic worship in South Florida, encouraging people to be more demonstrative. "Anglos looking at their fellow worshipers have felt their spirituality enhanced, seeing the fervor of praying, singing and raising hands.”

Eventually, the immigrants began giving back to society. Fanning out into more than 200 cities in 45 states, plus Puerto Rico and Washington, D.C., Pedro Pan alumni have entered a broad variety of occupations including law, banking, medicine, education, real estate and architecture.

"People ask why our exodus was successful," said Carmen Romañach, president of the Operation Pedro Pan Group. "There are many reasons, but family and our Catholic background were big ones. Trust in God helps you survive. And as we grew, we recreated that in our own families."

Romañach came to America as a girl of 15, along with her two younger brothers. The archdiocese placed them in camps but reunited them after a year. She later studied at Florida International University, and became a mental health counselor. It was a lesson she learned from her parents: "Whatever you have in your head can't be taken from you."

The Pedro Pans gave back to the Church as well, gathering each year for a commemorative annual Mass. Even amid the COVID pandemic, about 200 gathered at St. Mary Cathedral in December, including four priests.

Among them was Father Juan Sosa, pastor of St. Joseph Parish, Miami Beach. Father Sosa has been a churchman since late 1961, when he came to America as a 14-year-old. The Marist Brothers had already left Cuba, and he wanted to leave as well, he remembered. "My world was finished. I was glad to go."

In Miami, Father Sosa stayed first at Camp Matecumbe, then lived with about 80 others at Msgr. Walsh's refugee house. At 15, the young man entered St. John Vianney College Seminary, then went on to St. Vincent De Paul Regional Seminary near Boynton Beach.

His parents made it to the U.S. in 1967, then reunited with him and with his sister, who had been transferred to Indianapolis. So he grew up with several identities: Cuban, American, churchman.

"You don’t erase your identity, you just add another one," he explained. "The Church gave me a sense of belonging to a community. And we became contributors. Each of us individually has changed and enhanced all of South Florida. We've grown a commitment and tremendous love for the United States." 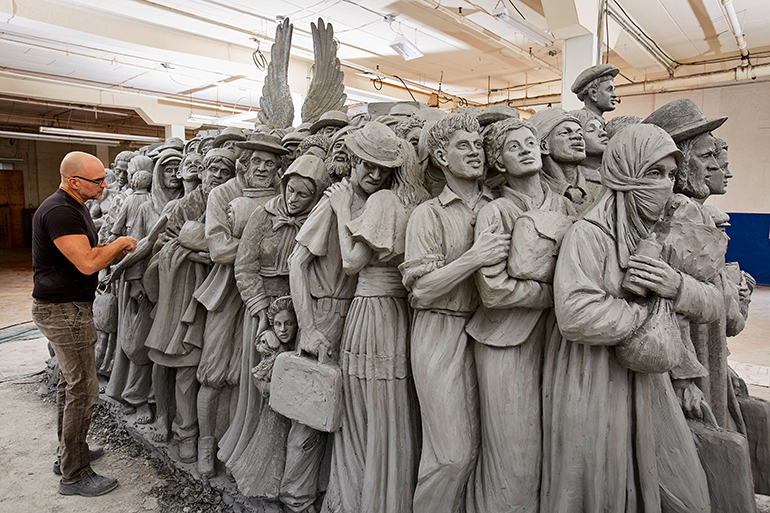 Sculptor Timothy Schmalz works on "Angels Unawares," which will be shown in Miami February 2021.