'Angels Unawares' will be in Miami for two months 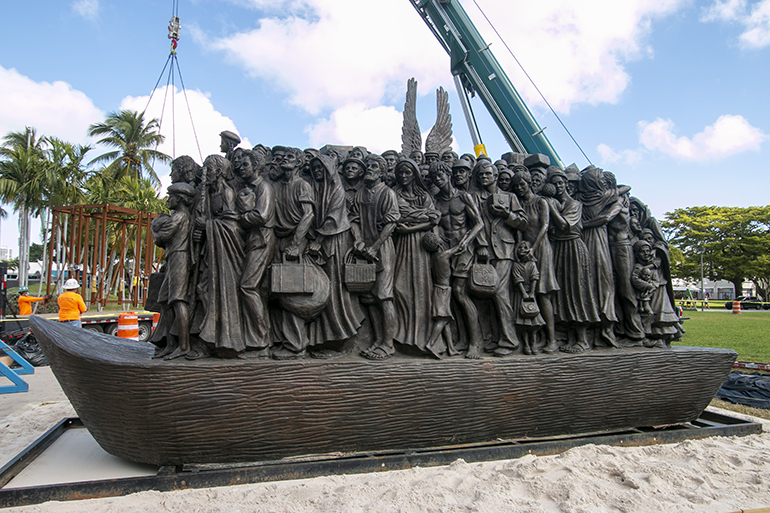 Workers from Florida Lemark unload and install the sculpture, "Angels Unawares" in Miami's Bayfront Park, where it will be on display through April 8, 2021. The installation took place Feb. 9, 2021. 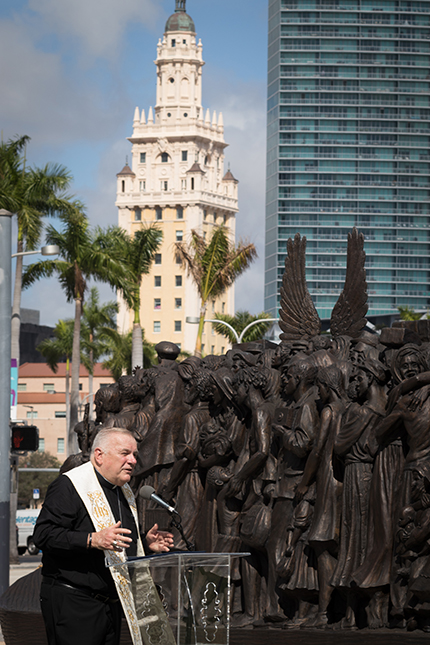 With the Freedom Tower in the background and the sculpture behind him, Archbishop Thomas Wenski speaks at the dedication ceremony for Angels Unawares at Bayfront Park, Feb. 10, 2021. He described Miami as the "Ellis Island of the South." The sculpture, a tribute to migrants and refugees, will remain at the park through April 8, 2021.

MIAMI | “Angels Unawares,” a bronze sculpture in the form of a boat full of immigrants and refugees, received a blessing from Archbishop Thomas Wenski the day of its unveiling, Feb. 10, 2021, in Miami’s Bayfront Park, where it will remain through April 8, 2021.

The sculpture faithfully represents Miami “because there are many immigrants among us,” Archbishop Wenski said during the brief ceremony, which was attended by a small group of civic officials, including Miami City Commissioner Joe Carrollo. He heads the Bayfront Park Management Trust that gave permission for the sculpture to be displayed there. Also present were Miami-Dade County commissioners Jose “Pepe” Diaz and Eileen Higgins.

Archbishop Wenski said he hoped the sculpture would “evoke a deeper sense of compassion toward those who are displaced, who have been forced to leave their native land to seek opportunities in other places.”

It was precisely for that reason, to call attention to the plight of migrants and refugees, as well as their contributions to society, that Pope Francis commissioned the creation of the original sculpture by Canadian artist Timothy Schmalz. That piece has been on permanent display in St. Peter’s Square since being blessed by the pope on Sept. 29, 2019, during the World Day of Migrants and Refugees.

The “Angels Unawares” sculpture that arrived in Miami Feb. 9, 2021 is a replica, also created by Schmalz, which has been traveling throughout the U.S. and will ultimately reside permanently on the grounds of The Catholic University of America in Washington, D.C.

“The archdiocese was able to bring the sculpture to Miami thanks to the generous donation of Carlos de la Cruz Sr.,” said Katie Blanco Bourdeau, president of the archdiocesan Development Corporation. De la Cruz is a Cuba-born businessman and art aficionado who has lived in Miami for decades.

The bronze sculpture, which measures 20 feet in length, was inspired by a biblical passage, Hebrews 13:2: "Do not neglect to show hospitality to strangers, for thereby some have entertained angels unawares."

It shows a group of migrants and refugees of different cultures and races, and different historical periods, huddled shoulder to shoulder on a boat. From their midst arise a set of angel’s wings, indicating the presence of the sacred.

“As residents of Miami we can see ourselves reflected in this sculpture, like those who come looking for liberty and prosperity in the United States,” said Randolph McGrorty, executive director of Catholic Legal Services, an organization that for more than 30 years has offered low-cost or free legal services to immigrants.

Looking at the sculpture “we are seeing Miami,” said Commissioner Carrollo after the ceremony. “The story of each one of us is there. Like them, we have come from different parts of the world. Just as in the sculpture, many people have become one.”