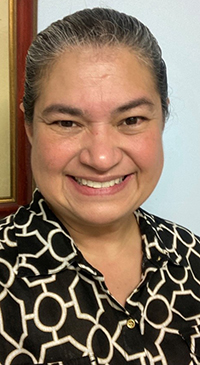 Olga Villar, named in November 2021 as executive director of SEPI (the Southeast Pastoral Institute), becomes the first lay woman to take on that leadership role.

She had been acting director and had previously served as SEPI’s director of Formation and Programs.

SEPI is the educational branch of the U.S. bishops’ Southeast Regional Office for Hispanic Ministry, and serves 30 dioceses in the southeastern United States.

Villar was first associated with SEPI as a teenager involved in Pastoral Juvenil (youth ministry). Since then, she has lived a life of commitment to ministry, earning both a master’s degree and a doctorate in Hispanic Ministry.

She has taught courses at SEPI for 22 years and served as director of Hispanic Ministry in the Archdiocese of Mobile, Alabama, leading the diocese in the process of the V Encuentro with great commitment and passion. She was part of the Southeast Regional leadership team for the V Encuentro and currently teaches in SEPI’s Master’s Program in Hispanic Pastoral Ministry and its School of Ministries.

During the past year she has served as director of Formation and Programs at SEPI, and she has done well in her role as acting director. She has a good working relationship with the dioceses that participate in SEPI as well as the national organizations of Hispanic ministry.

In her role as director of Formation and Programs and later as acting director, Villar was intimately involved in the development of a strategic plan that will continue to advance the mission of SEPI in alignment with the needs of Hispanic ministry in the 30 dioceses served by SEPI.