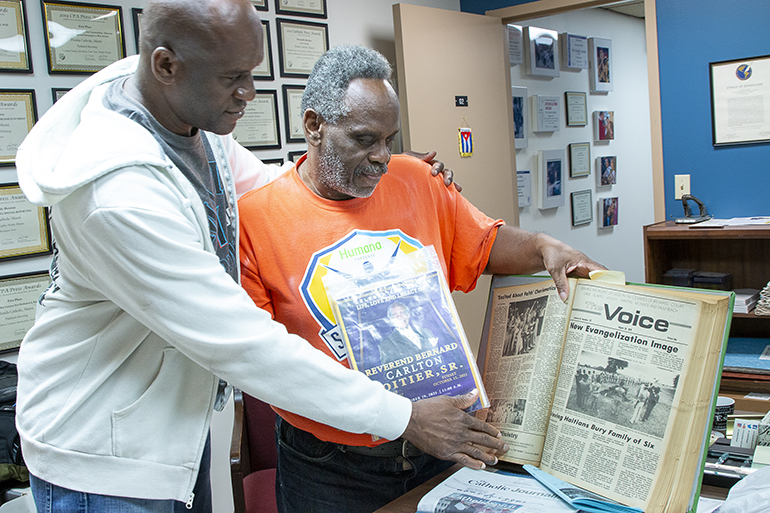 Augustin Lorfils, left, and Bernard Poitier look over the coverage of the burial of Lorfils' mother and five siblings in the Aug. 23, 1979 edition of the old archdiocesan newspaper, The Voice. Poitier is holding a memorial of his father, Bernard Poitier Sr., who made him responsible for obtaining a headstone for the family he had buried 43 years ago.

MIAMI | August is a bad month for Augustin Lorfils.

It’s been that way since one August morning 43 years ago. As he sat in front of the television watching cartoons, a breaking news alert came on: A Haitian mother and her five children had drowned when the smugglers they paid to bring them from the Bahamas panicked and ordered them and 12 others, at gunpoint, to jump into the sea a half mile from the Florida coast. 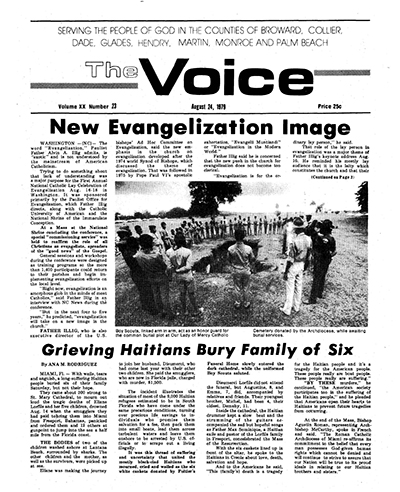 Image of the front page of the Aug. 24, 1979 edition of The Voice, precursor newspaper to the Florida Catholic in the Archdiocese of Miami.

He was 8 at the time, living with his younger sister and his father, Dieumerci. They too had come from the Bahamas a year earlier. “We came on the boat too. I remember it was like yesterday. My sister was crying. My dad didn’t want to cry. It was cold. It was dark. Everybody on the boat, grown men crying.”

Lorfils and his sister — but not his father — attended his family’s funeral, held at St. Mary Cathedral in Miami. Our Lady of Mercy Cemetery donated the plot where his mother and five siblings, ages 4 to 11, are buried. The Poitier Funeral Home donated the caskets.

“I wanted to get up so bad, just go lay on top of her,” is all Lorfils remembers from that day. But his uncle held his hand tight, and he held back. He didn’t go to the cemetery. “I didn’t even know where my mom was buried.”

He continued to hold back for the next four decades, never telling anyone how he had come to the U.S., or that his family’s journey had ended in such tragedy.

“I didn’t know how to deal with it,” he said. “I just kept everything deep inside me.” He also didn’t want people to feel sorry for him. Even when his dad, who died in 2018, started “drinking so hard.”

“I didn’t want people to know that my dad was not feeding me. I was scared they would take me away from him,” he said. “TV was my family. Cosby was my dad.”

Lorfils dropped out of school in ninth grade and started working at a Subway, then a Marriott, and ultimately for David Edelstein at the Delano on Miami Beach. He’s a father himself now to six children, ages 29 to 11, one of whom, a North Miami High School grad, plays football for Midland University in Nebraska.

“If you make it, just make your grandparents happy. Make them smile,” Lorfils tells him.

He’s finally realized, he said, that “there’s other people who went through the same thing.”

His family’s tragedy keeps echoing in the headlines. Haitian and Cuban boat people making the perilous journey to Florida, or crossing the Rio Grande along the southern border – and sometimes dying.

While sharing a meal this summer with some cousins and friends, the subject came up, and someone asked how parents could expose their families to such dangers. One of his cousins spoke up and explained, “you do anything to help your family,” Lorfils remembers. But he kept quiet. 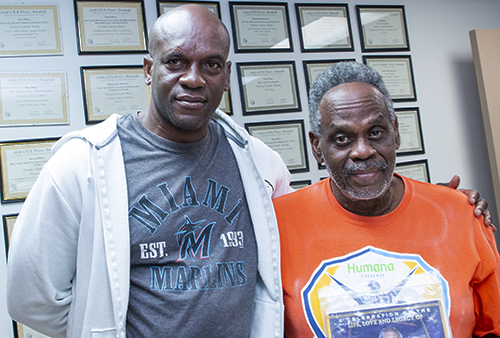 Augustin Lorfils, left, and Bernard Poitier pose for a photo in the offices of the Florida Catholic, Miami edition. Poitier promised his late father, the funeral director who donated the caskets, that he would get headstones for Lorfils' mother and five siblings. They perished off the coast of South Florida in 1979, while trying to join him, his father and sister in Miami.

Then his friend of 30 years said he, too, had come on a boat. Lorfils was shocked. He never knew. “That was your mom?” his friend asked when Lorfils finally told him his story.

Around the same time, another cousin told Lorfils that a man named Bernard Poitier Jr. wanted to speak with him. Poitier, the son of the funeral home owner, had been calling anyone named Lorfils until finally reaching his cousin.

Poitier’s father died last year. Looking through his papers, Poitier found the clipping from The Voice, the former archdiocesan newspaper, with coverage of the Lorfils family funeral. Poitier, 18 or 19 at the time, had been there, too, and remembered it vaguely. The clipping brought it all back.

“I know for sure there was a lot of crying,” he said. “It was a service that lasted for me for days. I had never experienced so many children inspiring a service of that magnitude. You only see stuff like that on television or in the news. It stayed with me.”

So did a promise his father had exacted when they buried Poitier’s uncle at Our Lady of Mercy in 2014. (By then his father was no longer associated with the funeral home.)

“There’s a family there I buried years ago,” Poitier remembered his father telling him, while pointing toward the F section at the cemetery. “That family does not have grave markers. They need to have markers. It’s only right. You promise me you’re going to do this.”

That’s why he was trying to reach Lorfils this August. That’s why he’s helping Lorfils set up a GoFundMe site to raise money for the headstones. That’s why he contacted the Florida Catholic. And that’s why Lorfils’ family will be memorialized during a Mass at St. Mary Cathedral, set for noon on Saturday, Oct. 15.

Lorfils and his sister need closure, Poitier said, noting that their father is buried just a few feet from his wife and children. (Lorfils and his sister, who now lives in Jacksonville, came up with the money for his funeral but not a headstone.) It’s also in keeping with what Poitier’s father did, donating those caskets 43 years ago.

“Being in that business, you know that families need help. And they needed help,” Poitier said. “He did it time and time again, because he could. It’s good when you can do things for people.”

But even if his dad had not been involved, he said, “I would do this for anyone, because everyone needs to know where their loved one is buried.”

Both are aware that the Lorfils story is not unique in South Florida, or even, for that matter, in the U.S.

“We read about this kind of stuff but to actually understand what those individuals are going through, it’s mind-blowing,” Poitier said.

“It’s not a Haitian thing. It’s a human thing,” said Lorfils, adding that he sees himself in earlier “boat people,” the Irish and Italians at the turn of the 20th century. “I used to feel that’s me. The only thing different was they were white, I was black.”

Rodriguez-Soto, then a summer intern, covered the Lorfils funeral for The Voice and La Voz Católica in August 1979.