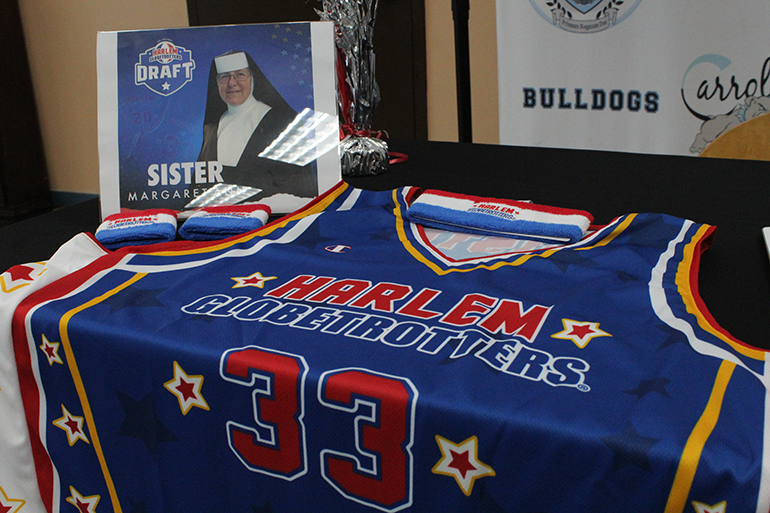 Official draft, official gear: A close-up of the official Harlem Globetrotters jersey, head and wristbands given to Sister Margaret Ann and the Carmelite Sisters of the Most Sacred Heart of Los Angeles who work at Archbishop Coleman Carroll High when they were drafted as honorees to the Harlem Globetrotters, Nov. 16, 2020. The sisters selected 33 as their jersey number to match the age of the resurrected Jesus Christ. 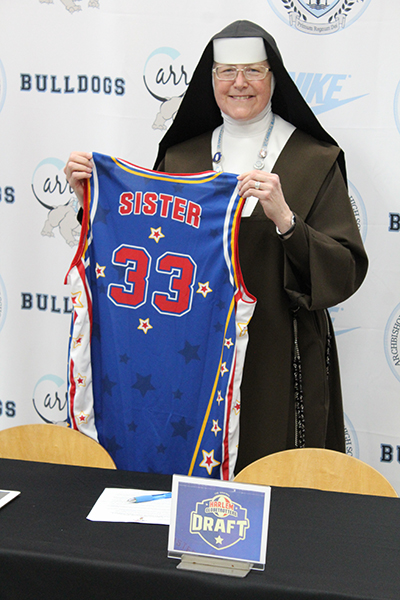 Sister Globetrotter: After signing the honorary draft letter from the Harlem Globetrotters, Sister Margaret Ann holds up the official Harlem Globetrotters jersey given to her and the Carmelite Sisters of the Most Sacred Heart of Los Angeles who work at Archbishop Coleman Carroll High, Nov. 16, 2020. The sisters selected 33 as their jersey number to match the age of the resurrected Jesus Christ. 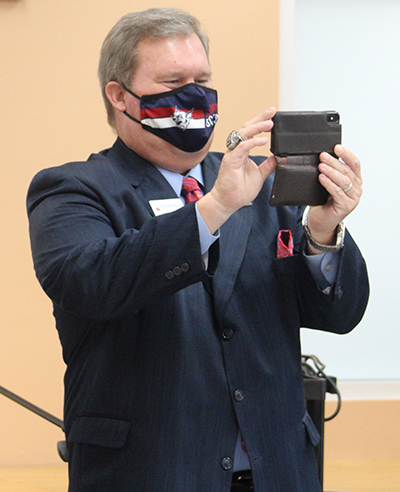 MIAMI | What happens when you give five Carmelite sisters from Archbishop Coleman Carroll High School a basketball? They star in a Miami Heat support video that goes viral on the internet, and then get drafted by the Harlem Globetrotters as the first nuns in the team’s 94-year history.

During the livestream of the 14th annual Globetrotters player draft, Nov. 16, 2020 at Carroll High, Sister Margaret Ann, principal, signed a letter of intent on behalf of herself and Sisters Ines, Mary Elizabeth, Immaculata, and Mara. They were also given official Harlem Globetrotters head and wrist bands, and a jersey with the nickname “Sister” and the number 33, representing the age of the risen Christ.

“The sisters and I are very grateful to be Harlem Globetrotters,” said Sister Margaret Ann.

Released Sept. 10, 2020 on social media, the video of the sisters was originally meant to reconnect Carroll High's students through their mutual support of the Miami Heat in this year’s NBA Eastern Conference Finals. In it, they shout out Heat player Kendrick Nunn.

“Hey Miami Heat. We heard there’s a Nunn on your team, and he’s pretty good. We want to let Head Coach Eric Spoelstra know that at Archbishop Coleman Carroll we’ve got some nuns ready to go if you need us,” said Sister Margaret Ann in the video.

Footage in the video showcased the sisters, in full habits, shooting 3-pointers, layups, and, with some offscreen assistance, a slam-dunking Sister Immaculata. The video took off, and has since accumulated over 10,000 views on Instagram, almost 4,000 views on YouTube, and over 1,000 likes on Twitter. Local 10 News picked up the story, as did NBC’s Nightly News, and ESPN.

The Miami Heat also noticed and gifted the sisters with virtual seats to game one of the Eastern Conference Finals against the Boston Celtics. Commentators, sportscasters, and cameras noticed the sisters in the audience during the game.

Owners of the Harlem Globetrotters noticed the “Nun to Nunn” Heat hype video and contacted Luis Perez, TV production teacher at Carroll High, and announcer for the Globetrotters in Miami.

“They called it the only good story coming out during this whole pandemic scenario. And that probably has a lot to do with why it was so successful,” said Perez.

He pointed out that the Harlem Globetrotters are known not only for basketball, but for their charitable endeavors as well as "90-plus years of breaking down barriers," as their website states.

“They look for these types of people in their players, and they look for it in their honorary picks. Sister Margaret Ann and the sisters are exactly who you want to pick when it comes to that type of description,” Perez added.

Sister Margaret Ann highlighted that the team focuses on community-building and helping others.

“When I was a small child, I remember watching the Globetrotters and just (being) impressed with the joy that they brought to other people, the enthusiasm, and the good, clean fun," she said. "Now as an adult, realizing how much good they do for the community and for other people, it’s a true honor to be a part of the Harlem Globetrotters, and a part of their mission.”

The sisters join past honorees from the world of sports, such as basketball player Kareem Abdul Jabbar and soccer player Lionel Messi, as well as some celebrities, including actors and comedians Bob Hope and Kevin Hart, and world-renowned historical figures Nelson Mandela and Henry Kissinger. While there are no other religious sisters on the roster, they join two popes: St. John Paul II (honored in 2000) and Francis (honored in 2015).

Sister Margaret Ann has history with the sport. She played basketball in high school, earned a scholarship to play in college, and later coached.

“I just see basketball as an exciting way of helping young people to grow. It’s a lot of fun, and it’s good for the community to have entertainment,” she said.

She joked that now that she's a Globetrotter, she'll have to start working on her tricks and moves before the team returns to Miami. “I haven’t worked on spinning a basketball in a while, but now is the time to pick it up again.” 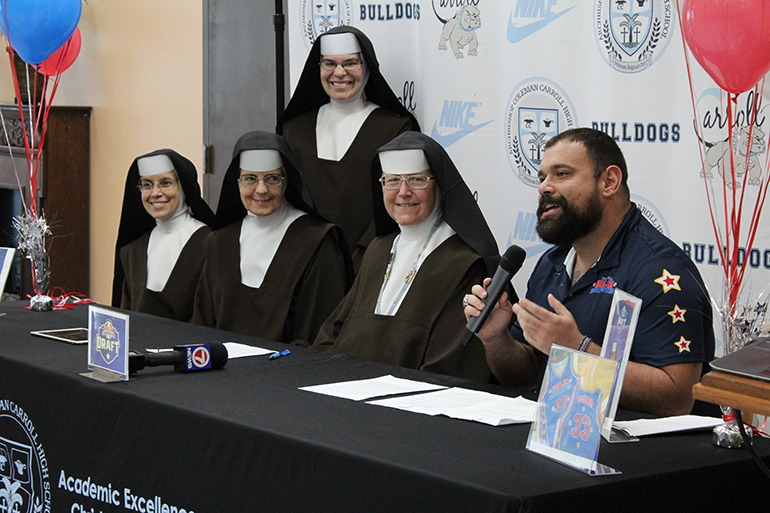 Luis Perez, TV production and broadcasting teacher at Archbishop Coleman Carroll High, and the announcer for the Harlem Globetrotters in Miami, announces the 2020 Harlem Globetrotters Player Draft honorary member: Sister Margaret Ann. She accepted on behalf of her fellow Carmelite Sisters of the Most Sacred Heart of Los Angeles who work at the school: Sister Ines, Sister Immaculata, Sister Mara, and Sister Mary Elizabeth (not pictured).