How tech devices, teachers made hybrid school possible during the pandemic 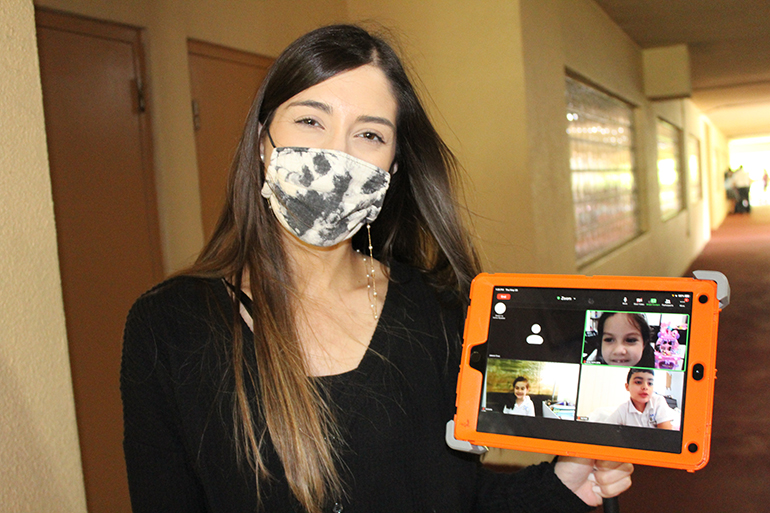 The future is In her hands: Our Lady of the Lakes School second grade teacher Jalenni Cruz carries the iPad where three of her students were logged in, via Zoom, and participating in the school day virtually. Throughout the day at OLL, iPads were the go-to device that maintained virtual students connected with their in-person peers, class lessons, and other school activities.

From the editor: In September 2020, schools in the Archdiocese of Miami reopened after closing in mid-March due to COVID-19. The 2020-21 school year began with all students learning online, but in October, archdiocesan schools gave parents the option to send their youngsters back to campus for in-person learning or to keep their kids at home, learning online. For archdiocesan teachers, that meant providing simultaneous instruction to in-person learners while also teaching students who were visible only on computer screens.

Much has been written about the “heroism” this past year of front-line workers in hospitals, grocery stores and other service industries: Those who did not have the luxury of working from home during the pandemic. We think archdiocesan educators also belong in that “heroic” category for the way they accepted the teaching challenges posed by the pandemic and adapted to the “new normal.”

To give our readers a taste of that “new normal,” we sent reporters to a Broward high school and a Miami-Dade elementary school, to spend a day with a teacher in a hybrid classroom. Here’s what that was like.

MIAMI LAKES | A school bell rings in the early afternoon at Our Lady of the Lakes in Miami Lakes. Doors open, and students pour into the hallways with the excitement that comes when less than an hour remains before dismissal. Some children laugh as their class lines move across campus. Compared to last May, when schools were quiet, empty and closed due to COVID-19, this sounds, looks, and feels like a blessedly normal school atmosphere — even with everyone wearing masks.

A second-grade class walks by with their teacher, Jalenni Cruz. If a group of second graders wasn’t a handful before, Cruz now literally has her hands full, carrying a tripod and an iPad. On the device, logged in via Zoom, are three students attending their school day virtually. As other groups walk by, the scene is repeated, with either teachers or student volunteers carrying the devices across campus, or using them in the classrooms. 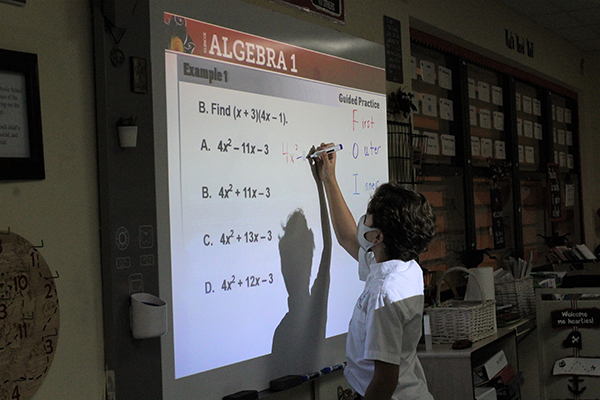 At Our Lady of the Lakes School, a student solves a math problem on the smart board of his class. While he is present in-person, some of his classmates were participating in the lesson virtually and in real-time through Zoom. Like all schools in the Archdiocese of Miami, students had the option of returning in-person or virtually during the 2020-2021 academic year. 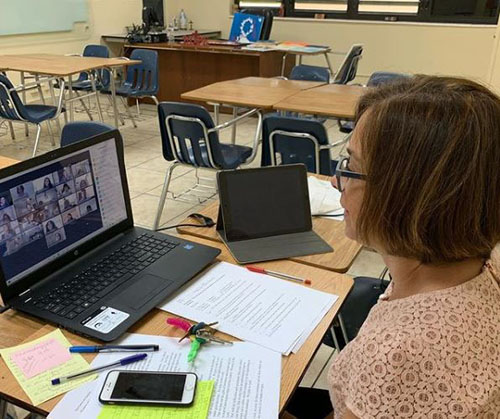 Eighth grade language arts and religion teacher Rose Cabrera leads a class discussion at Our Lady of the Lakes School with students attending virtually via Zoom. At the start of the 2020-2021 school year, in-person classes were not possible. When it was possible, teachers taught simultaneously for both in-person and virtual students. 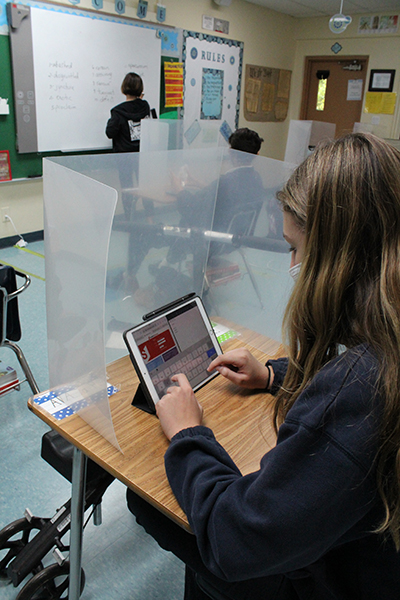 An eighth grader at Our Lady of the Lakes School jots down new vocabulary words on her iPad from behind her desk shield as her middle school language arts teacher, Rose Cabrera, writes on the smartboard. The class was combined with students learning in-person and virtually via another iPad that was logged in to Zoom. 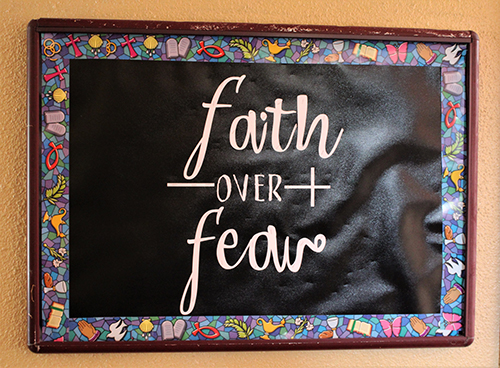 Living a year of "Faith over Fear": Our Lady of the Lakes School in Miami Lakes adopted the motto for the 2020-2021 academic year. Signs, like this one, were displayed all over school, as well as on T-shirts and face masks worn by teachers and faculty, and the message was also shared on social media. 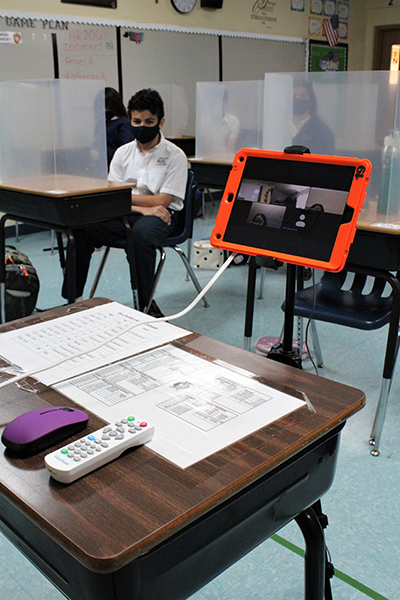 Shielded and protected, in-person or virtual: Middle school students at Our Lady of the Lakes School sit at their desks waiting for the start of class. Also waiting were students attending their class virtually, visible via an iPad in front of the classroom that was logged in to Zoom.

This is how Our Lady of the Lakes School accomplished hybrid — in-person and virtual — learning in the 2020-2021 academic year. They finished the year with 450 students attending in-person, and 13 virtually.

Like many schools, they adapted to the technical challenges, as well as health and safety measures brought on by the pandemic. They also adopted a new motto for the year: “Faith over fear.” Teachers posted it on bulletin boards all over the school, had them printed on face masks and T-shirts, and shared it on the school’s social media pages.

“Knowing the way we ended the 2019-2020 school year, and not knowing what to expect for the 2020-2021 school year, we decided the best thing to do was put our trust in God and work together to stamp out any fear that crept up from the pandemic and its effects,” said Principal Barbara Picazo. “We knew, above all, God was in control and would help us serve our students and families to the best of our abilities.”

The 2020-2021 academic year began in August at archdiocesan schools, with PreK students being the first to return in-person. At OLL, they were greeted on that first day by cheering masked teachers and welcome signs, temperature checks, and plenty of hand sanitizer. Even Father Luis Flores, parochial vicar, came by to sprinkle students with holy water as they arrived.

Originally, only sixth through eighth graders at OLL had their own iPads. The rest of the students accessed the devices through traveling tech carts. Once the school confirmed that virtual learning would be the norm, at least to start the year, iPads were given to third through fifth graders.

“Our team programmed approximately 300 iPads manually,” said Nicole Peña, instructional technology resource coordinator at the school. Her team added all the apps and virtual platforms, such as Zoom, Showbie and Socrative, as well as virtual versions of textbooks.

Teachers, who were already set up to teach virtually from desktop computers in their classrooms, received an iPad on a tripod. It allowed them to move away from their desks and walk back and forth at the front of the classroom. On the floors in front of the smart boards, an area boxed off with tape served as a visual reference, reminding the teachers of how wide a radius they could travel before they were out of camera view.

Rose Cabrera, religion coordinator and middle school language arts teacher, said every school found their unique method to teaching virtually. “You have to find what works, and you really have to know your faculty, too, and know their strengths and weaknesses with technology,” said Cabrera.

She said the real challenge came in March 2020, when schools had to transition quickly from in-person to virtual teaching for the first time ever. By August, they were prepared.

“We had a lot of support from the administration and from our tech people when there was an issue,” Cabrera said. “We all rose up to the challenge. It’s almost like we didn’t skip a beat.”

At the end of September 2020, Archbishop Thomas Wenski and the archdiocesan Office of Schools approved in-person learning while giving parents the option of keeping their children at home, learning virtually. Either way, classrooms would fill with students for the first time in months.

“As someone who considers herself to be a veteran teacher, I felt the new school year would be different and challenging. Yet seeing the students return, and bringing back normalcy and consistency to my students’ lives, was satisfying,” said Cabrera.

Some students, like OLL eighth grader Kamila Pimentel, felt relieved to be back. “I don’t really concentrate at home with all of the noise and distractions,” she said.

But don’t think that students attending class at home had it easy. In real time through Zoom, they followed class schedules, took tests with their classmates, read parts aloud during plays, answered math problems written on the smart boards, and more.

“It’s very engaging because they make it so that both in-person and virtual are actively participating in the class,” said eighth grader Addison Lucas.

The virtual option also allowed students who were absent, due to COVID exposure or other reasons, not to miss school entirely. Virtual also worked out for teachers, who taught from home when the need arose while a substitute teacher was physically present to supervise the classroom.

EXTRAS FOR AN XTRAORDINARY YEAR

But what is a school year without a little fun? All students took part in the extras that make an academic year memorable, regardless of whether they were attending in-person or virtually. 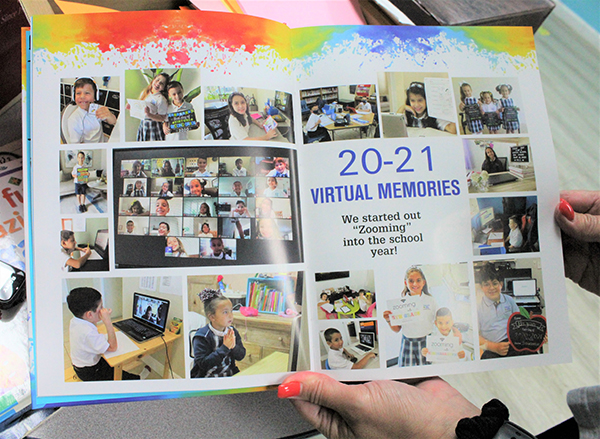 "Zooming" into a school year: The 2020-2021 yearbook at Our Lady of the Lakes made sure to include all students, whether they attended school in-person, or virtually. Nicole Peña, IT coordinator and yearbook manager at OLL, credits families for sending in photos of their children learning from home.

Via Zoom, they went on virtual field trips and tours, such as the one of the NBC6 studio given by news anchor Roxy Vargas. Firefighter Hector Gonzalez showed the students Palm Beach County Fire Station 23 and took them on a virtual ride-along on a fire truck. The students also held virtual meet-and-greets with guests such as Miami Lakes Mayor Manny Cid, among others.

Janelle Jay, mission coordinator for the lay missionary group Amor en Accion, who would normally visit the school in person, was invited to speak via Zoom about the Archdiocese of Miami’s missionary efforts in Haiti and the Dominican Republic.

“I was pleasantly surprised and impressed as I was presenting to the elementary school students. They were an attentive audience. They asked great follow-up questions and showed great care and concern for their sister school (in Haiti),” Jay said.

The tripod-mounted iPads were used not just in the classroom but to capture outside activities in real time. Eucharistic processions, Masses and other events were livestreamed, including living rosaries — with student volunteers carrying the devices though which classmates participated virtually. For Good Friday, eighth graders, participating both in-person and virtually, produced their traditional Stations of the Cross with a virtual twist.

“We’ve tried to do as much as possible so that the kids don’t miss out,” said Cabrera.

OLL’s yearbook captures the highlights of this unique pandemic year. In some pages, students can be seen in traditional school photos, showing off smiles that, for a moment, were not covered by a mask. But the other pages, where everyone is masked, are just as memorable.

Students attending virtually were not left out. Peña, who apart from IT also helps with the school yearbook, asked the parents of students learning virtually to contribute photos of their children’s academic year at home, along with them having fun with hobbies, pets and holidays.

“This is a work of heart,” said Peña.

For the 2021-2022 academic year, hybrid schooling will not be an option. Students who wish to attend classes virtually will have to enroll in ADOM Virtual, the virtual Catholic school of the Archdiocese of Miami. For more information, www.adomvirtual.com.