How to succeed in business

Carricarte family give their name, support to career pathway at Columbus High 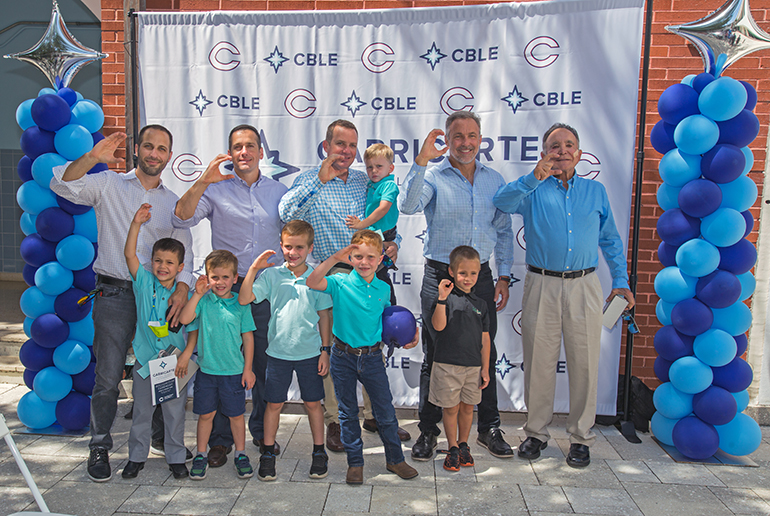 “My father, brothers and I have had the opportunity to found and lead thriving businesses and we look forward to being able to share our knowledge and resources to help the students of Columbus graduate with an edge to succeed in business,” said Michael Carricarte, Jr. 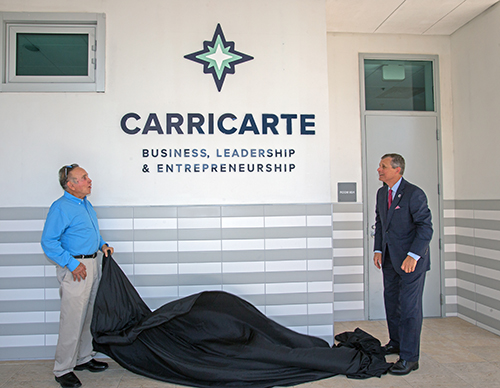 Michael Carricarte, Sr., and Juan Vila, academic dean at Christopher Columbus High School, unveil the Carricarte Business, Leadership and Entrepreneurship logo outside the business classroom April 15, 2021. The family of alums gave its name and support to the business career pathway at the all-boys Miami high school. 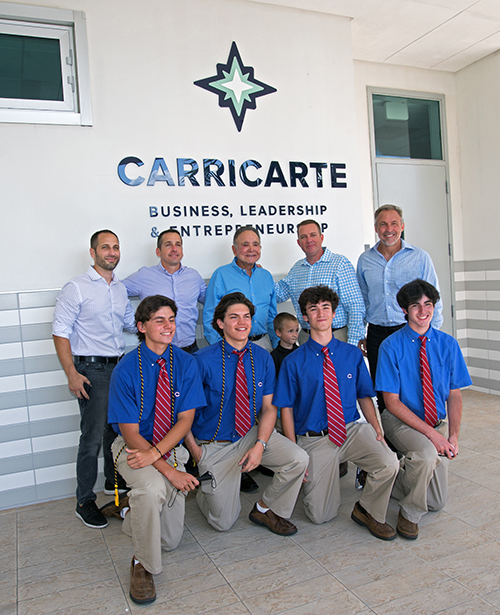 Members of the Carricarte family pose with business students at Christopher Columbus High School at an event April 15, 2021, marking the naming of the Carricarte Business, Leadership and Entrepreneurship career pathway at the all-boys Miami high school.

As part of the event, Carricarte, Sr. and Columbus President Thomas Kruczek unveiled a logo and a sign outside a classroom naming it the Carricarte Business, Leadership and Entrepreneurship classroom. They also honored senior business students with black and yellow cords to be worn at graduation.

“Columbus teachers taught us faith, service and building character,” Carricarte, Jr. told those gathered at the recognition ceremony. “As business leaders we affect the lives of thousands of families. We learned the same values that our father learned here and brought to us. Columbus has done more for me than I’ve done for Columbus.”

With the support of the Carricarte family, the school will be able to offer a rich business program with a variety of courses, clubs, honor societies, competitions, field trips, and guest speakers.

A Columbus FBLA club officer expressed his appreciation for the program. 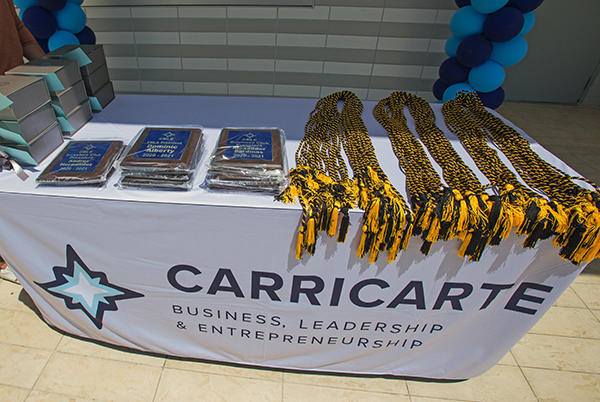 Senior business students at Christopher Columbus High School were honored with plaques and cords of distinction at an event April 15, 2021, marking the naming of the Carricarte Business, Leadership and Entrepreneurship career pathway at the all-boys Miami high school.

“Business is my passion,” said Alexander Perez, a senior. “Business is everywhere. Business is the kid selling candy on the weekends to make some extra money.”

As part of the ceremony, members of the school’s Business Honor Society took an oath to uphold the society’s standards. Carricarte, Sr. and Juan Vila, Columbus academic dean, handed out the cords and told each recipient to “make money.”

“Each one of you receiving this cord should be extremely proud,” said Perez. “This cord is the beginning of a new chapter in our lives.” 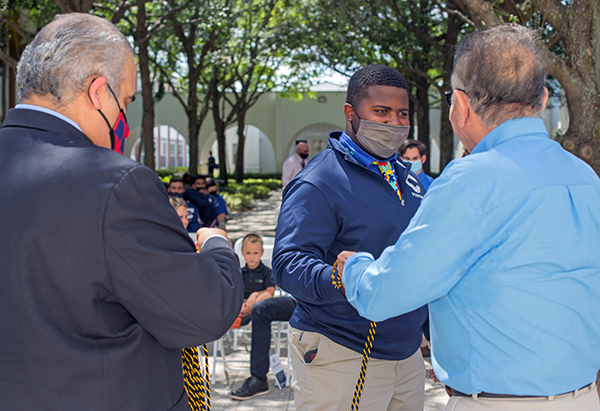 Juan Vila, left, academic dean at Christopher Columbus High School, and alumnus and benefactor Michael Carricarte, Sr., give a cord of distinction to business student Jared Trapp during the April 15, 2021 event marking the naming of the Carricarte Business, Leadership and Entrepreneurship career pathway at the all-boys Miami high school.

Next year, Columbus junior Gustavo Jimenez will take over as the FBLA club president. He said that he has learned a lot since the program started. “I’ve learned about business communications,” he said. “I’ve learned business terms and speaking to different audiences and marketing.”

The Columbus business students have several role models in Columbus alumni who are on Fortune 500’s list of CEOs. They are Carlos Rodriguez of ADP Inc., Robert Sanchez of Ryder Systems, Inc., and Jose Mas of MasTec, Inc.

Naming pathways to careers such as law, science and medicine is something that Columbus wanted to do, said Kruczek, the high school’s president.

“This is the first inaugural naming gift,” he said. “The Carricarte family has been incredibly supportive. Programs like this one help students prepare for college and life afterwards. It helps them understand where they want to go in life. We are thankful to the Carricarte family for their generous support. With the family’s help and the dedication of our talented faculty, our school is fully preparing our students for a bright future in the business world.” 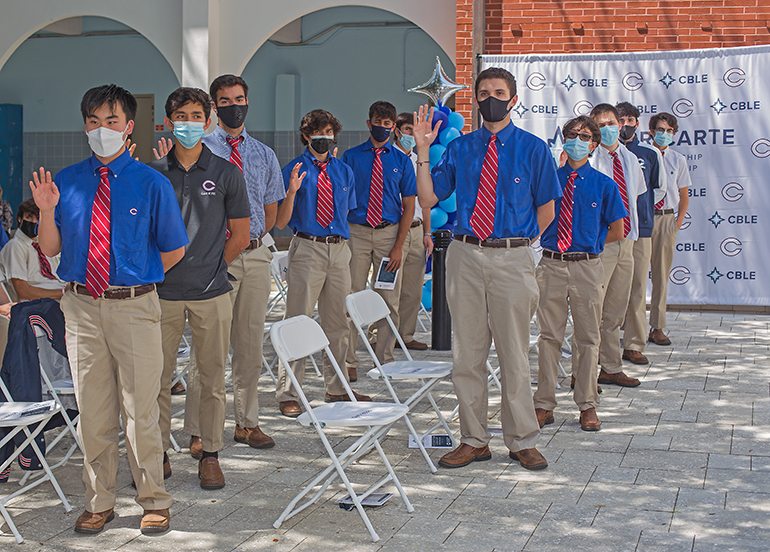 Columbus Business Honor Society students take an oath to support the society's standards during an event April 15, 2021, marking the naming of the Carricarte Business, Leadership and Entrepreneurship career pathway at the all-boys Miami high school.