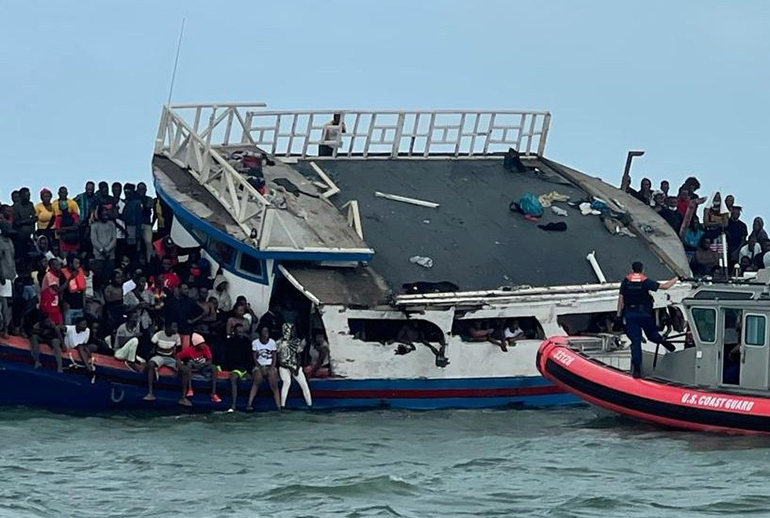 A boat packed with more than 300 Haitian migrants, which ran aground off Ocean Reef, is seen as the U.S. Coast Guard attend to it in the Florida Keys, Florida, U.S. March 6, 2022. (OSV News photo/U.S. Customs and Border Protection handout via Reuters)

MIAMI | President Joe Biden’s plan to address a New Year’s influx of boat refugees landing on Florida shores via a new quota system for select migrants is likely more a bandage than a permanent solution, according to Church officials in southern Florida.

Hundreds of Cuban and Haitian migrants, along with migrants from Nicaragua, began arriving by boat in increased numbers in late December and the first weeks of 2023. On Jan. 1, 2023, approximately 300 boat refugees arrived at Dry Tortugas National Park, located about 70 miles west of Key West, with an additional 45 entering Key West.

DeSantis’ office reported that since August 2022, federal, state and local law enforcement have encountered more than 8,000 migrants in waters off the coast of Florida. In addition, in the 2021-22 fiscal year, 220,000 Cubans were reportedly stopped at the U.S.-Mexican border, almost six times as many as the previous year.

In response, the Biden administration recently announced it would immediately begin turning away Cubans as well as Haitians and Nicaraguans who come across the U.S.-Mexico border. This follows a plan announced last October to limit Venezuelan migrants entering through that border last year.

For the next two years, the Biden administration will accept 30,000 people per month from Cuba, Haiti, Nicaragua and Venezuela, offering them work permits if they use “legal pathways” to enter, such as applying in their home countries; have eligible sponsors; and pass vetting and background checks. Those who simply cross the U.S. border from Mexico will jeopardize their asylum claims.

“The plan doesn’t plan seem to be workable because it says (refugees) can come in for two years — then what happens after those two years? Will we have renewals like we do for people on Temporary Protected Status, like Salvadorans who have been on TPS for 20 years but with no real path to citizenship?” asked Miami Archbishop Thomas Wenski. He spoke with OSV News by telephone Jan. 13.

“It requires somebody to have a sponsor here so they won't become a public charge, but with only a two-year window for work permits. You wonder what kind of burden that places on family members and it doesn’t address the problem of people coming by boats,” the archbishop said.

A real long-term U.S. policy toward Haiti, Cuba, Venezuela and Nicaragua would have to address the so-called “push-pull” factors driving immigrations from those countries to the U.S., Archbishop Wenski noted.

The situation in Haiti has been devolving into one of widespread violence and hopeless poverty, while U.S.-Cuban relations have exacerbated economic dysfunction in that country, he noted.

Meanwhile, the U.S. needs service-industry employees following the global pandemic, but most of those who have arrived in the U.S. in the past year are unable to legally work, pay taxes or contribute to the economic health of the U.S., the archbishop said.

Randy McGrorty, executive director of Catholic Legal Services of the Archdiocese of Miami, cautioned that the numbers of boat refugees arriving recently are not nearly as large as those seen in the 1980s and 1990s, and that the U.S. southern land borders remain the first point of entry for Cubans and others.

He also noted that half to two-thirds of the 30,000 asylum seekers that the Biden administration said it will accept are likely to gravitate to south Florida, where they will pursue their asylum claims in U.S. courts and where Cuban, Haitian and Central American populations are already established.

McGrorty said it remains unclear if the new Biden parole program will effectively work to reduce illegal migration pressures at the U.S. border and at sea, but that the plan introduces a new form of U.S. sponsorship for those seeking asylum.

“One thing that is a very interesting concept: It isn't necessarily a relative or individual who is a sponsor; a parish or a business could sponsor a refugee,” McGrorty said.

“Sponsorship usually had to be through a family member or government agency, so now a parish can sponsor a refugee and I would encourage parishes and businesses to sponsor people — particularly unskilled workers. Individual households can also serve as a sponsor if properly vetted,” he added.

Peter Routsis-Arroyo, CEO of Catholic Charities of the Archdiocese of Miami, noted that while the influx of boat refugees this month has created a minor media storm, the situation has not yet affected Church agencies in the region.

But if projections hold true that the Biden parole program could introduce additional tens of thousands of asylum seekers to the greater Miami area, that will have ramifications on the local housing situation.

“Miami is a tremendously resilient city. You hear about these buses with migrants going to New York, Chicago and Boston, and they are seeing over the course of the last year upwards of 30,000 or so, whereas Miami has taken in 200,000 in that same period of the last year or year and a half,” he said.

Catholic Charities will invariably play a role in assisting those who “fall between the cracks” of sponsorship and employment, in some cases helping them relocate internally to regions where they have family or a willing sponsor.

“Right now, the majority (of refugees) are coming through the border in the typical fashion and there are not large numbers of boat arrivals. The majority of them have asylum cases upwards of a year or so from now, and we have certainly seen an increase in our Catholic Charities Head Start programs,” he said of the government-affiliated program for children up to three years of age.