MIAMI | Camp Erin returns for a virtual spring session this March 26 and 27, 2021. Sponsored by Catholic Hospice and part of the Eluna Network, the free, biannual bereavement camp for children ages 6 to 17 remains online, but will still provide comforting, educational, and coping sessions they would otherwise offer in-person. 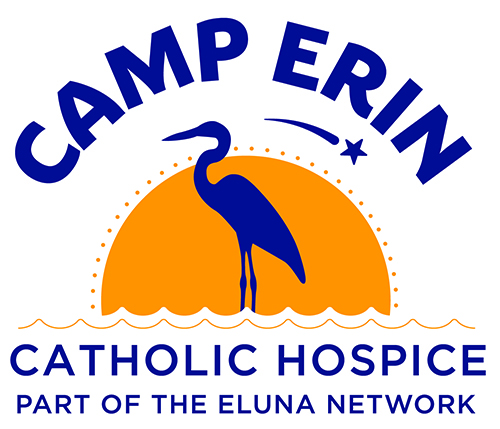 Camp Erin is a bereavement camp for children and teens ages 6-17, sponsored by Catholic Hospice and a part of the Eluna Network. Camp Erin South Florida has gone virtual for spring 2021, with camp sessions taking place online via Zoom, March 26-27, 2021.

A year ago, Gian Carla Santayana, manager of Camp Erin in South Florida, began preparing for a camp that never would be.

“We were going to Camp Owaissa Bauer (in Homestead). I was getting my things together. And then the news started,” said Santayana.

Although she doesn’t watch the news often, she worried when her family and friends kept talking about “this virus.”

Many questions arose in terms of additional health and safety measures that would need to be taken should the camp proceed as regularly scheduled. As more information revealed the dangers of contagion, it became clear that Camp Erin would be canceled, like so many other gatherings, because of the coronavirus.

“We just couldn’t see what was going to happen in the near future, or the future future,” said Santayana.

With the following camp scheduled for October 2020, organizers had the summer to plan for the best possible way to meet safely. Catholic Hospice, Camp Erin, and the Eluna Network customized a condensed version of the camp, which normally takes place over a weekend. They also added a new portion focusing on the physical, mental and emotional stressors caused by COVID-19. But they remained unsure as to how they would meet for camp.

During quarantine, Camp Erin used social media to support the community as it faced a variety of losses and changes. They posted encouraging messages, holiday greetings, and tips about managing home life during quarantine. Like many exploring video call platforms for the first time, they discovered the outreach capabilities made possible by those platforms. They realized Camp Erin could happen online. 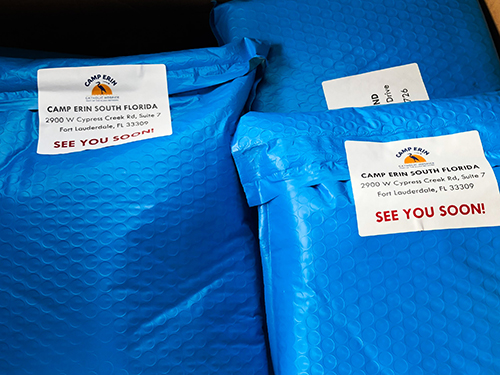 Camp Erin South Florida sent "camp in a package" goodie bags to the homes of campers participating in the fall 2020 and spring 2021 camp sessions taking place online via Zoom. Camp Erin is a bereavement camp for children and teens ages 6-17, sponsored by Catholic Hospice and a part of the Eluna Network.

The first virtual Camp Erin was held Oct. 3, 2020. It lasted a few hours, and campers took part from the comfort of their own homes via Zoom. Campers were provided with a “camp in a package,” filled with items like a Camp Erin T-shirt and drawstring bag, art supplies, a pen and pencil, a journal, egg shakers for music therapy, luminary bags, and a paper frame to put a photo of their deceased to be used in a Remembrance Ceremony.

“Everything that they would need to participate in the activities, we made sure to put in there,” said Santayana.

The “camp in a package” even included traditional camp snacks, like chocolate and marshmallow s’mores bars, which would have been made in-person around the campfire on Saturday night. The Camp Erin team also delivered pizza to the homes of each participant, because, like the s’mores, it is a staple end-of-camp treat.

The camp’s schedule included breakout groups and sessions focusing on art, music, and mindfulness activities that help express and process grief, as well as a Remembrance Ceremony to memorialize loved ones.

“These are tools that they can use to process their grief, but also tools they can use even outside of our camp,” said Santayana.

“The kids are over virtual. They are yearning for something in person, but given the circumstances, this is what we have to work with,” Santayana said. “Campers should truly make meaningful connections with their peers, with our volunteers, and with staff. We did it for four hours in October. In hindsight, that’s such a short amount of time to accomplish what Camp Erin is all about.”

For the March 2021 camp, organizers decided a two-day virtual camp would work better. The schedule includes breaks for mindfulness, snacks, and lunch. In addition to the educational portion, there will also be karaoke, a virtual dance party, and other surprises to replicate the fun parts of the in-person camp.

“We want to make sure they have a break from their day to day that they’ve been experiencing,” said Santayana.

After a Camp Erin weekend, virtual or not, the team remains in touch with campers and their families, as usual.

“It’s on the family to continue the support. We’re here to continue providing guidance, but the kids are home with them,” said Santayana.

If the need remains, campers are allowed to attend the next Camp Erin, although a small percentage do. And while the pandemic continues to be a concern, Santayana marvels at the resiliency of children and teens living in these times.

“They are more hyper aware. I think schools are doing well with teaching them that life is hard, but there are ways of coping with it,” she said. “Sometimes there are things, like death and a pandemic, that we can’t control. But we are all in this together.”