ORLANDO | Carlos D. Coton of San Marcelino Champagnat Council in Miami has been named Florida’s Knight of the Year by the Florida State Council of the Knights of Columbus. 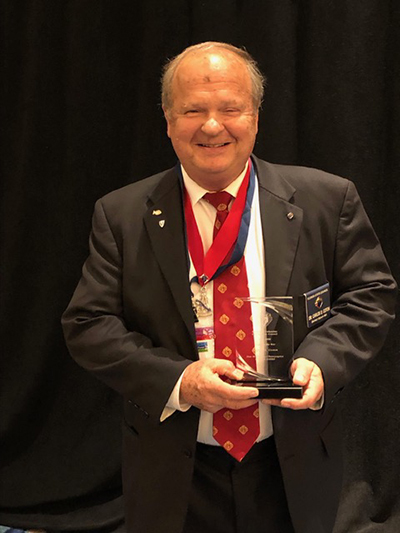 Carlos Coton, Grand Knight of the San Marcelino Champagnat Council based at St. Brendan Church in Miami, was named Florida's Knight of the Year by the Florida State Council of the Knights of Columbus at their annual convention, May 29, 2021.

Coton was selected by the 55,000 member Florida jurisdiction of the international fraternal organization for his service to his council, his church and the local community. He received the recognition May 29 at the Florida Knights of Columbus’ annual convention in Orlando.

Coton, a member of St. Brendan Church in Miami, is very active in parish life, serving as the trainer and scheduler for church lectors and extraordinary ministers of Communion. He is a certified catechist instructor and a certified facilitator for the archdiocesan Safe Environment Program.

He currently serves as his council’s Grand Knight, leading the council to exceed previous levels of support in many charitable and faith activities, including food for the needy and toys to unfortunate children.

Coton also is an active member of the Multiple Sclerosis Society, the National Kidney Foundation of Florida and La Liga Contra el Cancer, among his many philanthropic activities. He has served as a referee for high school basketball and football games for nearly three decades, instructs new referees and teaches at several local colleges.

He spearheaded the effort to assist his church’s pastor to successfully reopen the church to regular weekday and weekend Masses by marking usable pews, planning parishioner flow and helping to enforce the Center for Disease Control’s COVID-19 guidelines.

He also has a strong commitment to financially and spiritually supporting seminarians studying for the priesthood in Florida and in Venezuela, the home country of his Council’s chaplain.

Because of his leadership of the council, he was unanimously nominated by his council members and past grand knights to the Florida State Council for this honor.

The Knights of Columbus is a Catholic men’s fraternal organization of nearly two million members worldwide. The principles of the Order are charity, unity, fraternity and patriotism. The Florida State Council is one of the largest jurisdictions of the Knights with more than 300 councils throughout the state.

Other News from St. Brendan Church