'You blessed our lives,' Father Tony 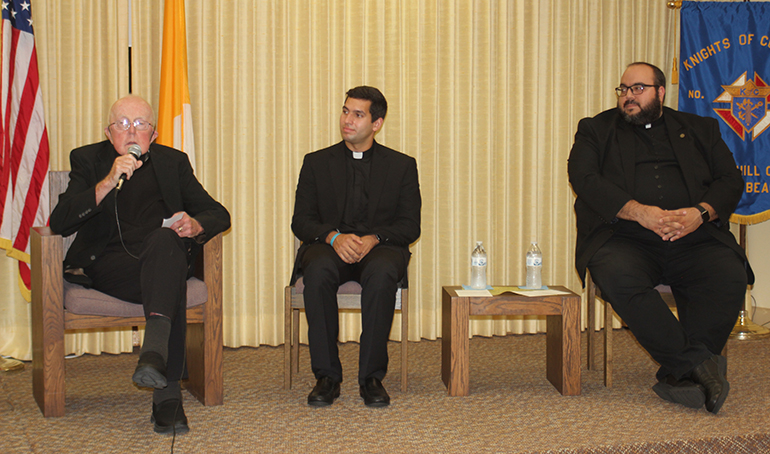 Father Anthony Mulderry, pastor emeritus of St. Gabriel Parish in Pompano Beach and former chaplain and longtime supporter of the Serra Club of Broward County, reflects on his priesthood shortly after he is presented the St. Junipero Serra Excellence Award May 14, 2022, at a ceremony organized by the Serra Club of Broward County. Shown at his side is Deacon Gustavo Santos, a seminarian for the Archdiocese of Miami, and Father Matthew Gomez, vocations director of the archdiocese.

POMPANO BEACH | For his endless support of vocations to the priesthood, Serrans and the Church, Father Anthony Mulderry, 79, received the inaugural St. Junipero Serra Excellence Award presented by the Serra Club of Broward.

“Father Tony,” as he is affectionately known, served the Serra Club of Broward County as its chaplain for 18 years, said Malcolm Meikle, club president, as he presented the honor during a reception May 14, 2022, at host St. Gabriel Parish in Pompano Beach. 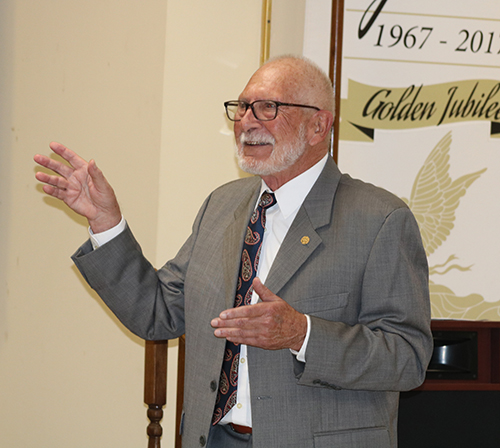 “Father Tony has demonstrated his commitment to vocations to the priesthood and consecrated life in the Catholic Church,” Meikle said, adding that Father Mulderry has gone above and beyond to guide and support the Serra Club and its members over the years.

Nearly 140 people from archdiocesan parishes and beyond turned out for the evening event, which featured several guest speakers, including Father Matthew Gomez, director of vocations for the Archdiocese of Miami, and Father Sahayanathan Nathan, pastor of St. Gabriel and current spiritual director for the Broward Serra Club.

Along with the first-ever St. Junipero Serra Excellence Award came the announcement of the club’s launch of an online prayer group.

The project is open to all and designed to interest prayer warriors everywhere to join Broward Serrans in praying for an increase in vocations, something especially needed today, when the priesthood is aging and shrinking and there is less interest in the ministerial priesthood and religious life.

“The Serra Club is significant and plays a vital role,” Father Nathan told the Florida Catholic, adding that he is delighted with the online prayer initiative. “Prayer is powerful. Prayer is the best weapon in the world. Through prayer we can support vocations.” 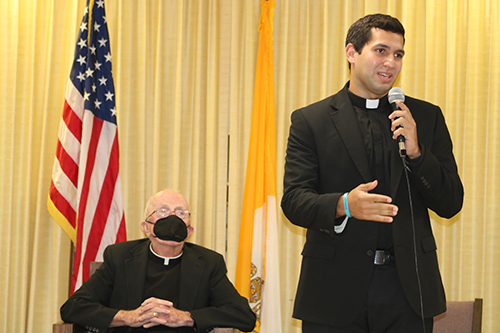 Deacon Gustavo Santos, a seminarian of the Archdiocese of Miami, talks about his journey to the priesthood May 14, 2022, during a Serra Club of Broward County event honoring Father Anthony Mulderry, pastor emeritus of St. Gabriel Parish in Pompano Beach, shown carefully listening to his talk. Father Mulderry is the former chaplain and long-time supporter of the Serra Club of Broward County.

The evening also included a $1,000 financial award to Deacon Gustavo Santos, a seminarian of the Archdiocese of Miami. The financial gift will be used for Deacon Santos’ education as he finishes his final year at St. Vincent De Paul Regional Seminary in Boynton Beach and edges closer to his ordination to the priesthood in 2023.

During the evening, Deacon Santos gave a short talk where he told the audience a little about his calling and journey from Venezuela to the seminary in 2012. He also thanked participants for their continued support.

Since the club was established in 1962, the Broward County Serrans have supported the regional seminary and provided financial support to seminarians. Members sponsored vocations awareness programs at area Catholic schools and engaged lay Catholics through presentations and speakers at monthly meetings.

The excellence award and prayer program are ways the Serrans are beefing up efforts during their new fiscal year.

“In collaboration with Father Gomez and the vocation office, our mission is to create a culture of vocations in our parishes,” said Meikle. “To start, we are attempting to reach out to all parishioners to participate in an online prayer group for vocations. The St. Junipero Serra Excellence Award will be an annual recognition.”

Candidates will be nominated and chosen from the parishes in Broward County, he explained.

The Serrans thought it appropriate to award Father Mulderry, described as
“a model priest,” with the inaugural award, named for the club’s patron, an 18th century Franciscan priest canonized by Pope Francis in 2015 for his missionary work building up the Church in California.

Peter Battaglia, a former member of All Saints Parish in Sunrise who now attends St. Matthew in Lantana, Diocese of Palm Beach, drove the distance to be at the evening honoring his favorite priest.

“Father Tony helped build All Saints in Sunrise,” he said. “He is down to earth. His homilies are always great. People can relate to them. He is always there. When my wife converted in 1986, Father Tony was there for her. He baptized my two daughters. He performed our marriage. He is a great priest. He is the best priest I have ever known.”

Appearing frail and delicate, Father Mulderry was escorted into the parish hall and onto the stage after attendees were greeted and seated. This was the first public event he had attended since the pandemic and since going through some health issues that left him homebound for the most part, according to Meikle.

As the priest looked around the room and saw familiar faces, he lit up. When he received the award, he appeared invigorated, and when he spoke, his words were powerful, touching and humorous. He captivated his audience, especially the young seminarian, Deacon Santos, sitting on stage at his side. 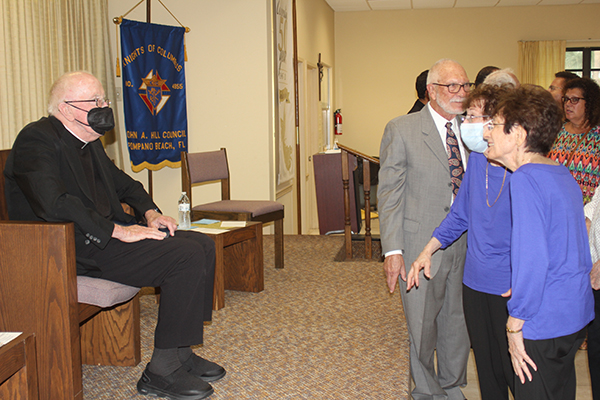 Twin sisters Patricia Mrozinski and Cecilia Dunlavey, parishioners of St. Gabriel in Pompano Beach, visit with Father Anthony Mulderry after he was presented the first St. Junipero Serra Excellence Award May 14, 2022, during a Serra Club of Broward County event at St. Gabriel.

A woman shouted out from the back of the parish hall, “We love you, Father Tony.”

Other people chimed in with words of praise, love and admiration. “You are the best,” said one woman.

Father Mulderry took off his facemask and smiled, then continued. “I want to thank the Serra Club for honoring me. Over the years, I bet you heard about the Serra Club but didn’t know what it was. I bet you thought it was the Sierra Club,” he said jokingly, noting a common mistake by many, who confuse the club’s name with the name of the popular environmental group.

He went on to reflect on his own calling to the priesthood in 1959, when he was in high school in Mulligan, County Westmeath, Ireland, where he was born.

“I had pretty much signed up with the Irish Columban Fathers,” he said about the order of missionary priests founded in Ireland and dedicated to spreading the Good News and living among the poor and disadvantaged. Father Mulderry was only 16 years old at the time.

“That same spring right before Easter, my dad dropped dead at a football game. We were a poor family. That destroyed all my chances of becoming a priest,” he said, noting he was needed at home to help his mother and family.

As his story went on, it got more fascinating.

His father’s best friend immigrated to America in 1931. He kept in touch with family and friends and heard about his friend’s death and young Anthony Mulderry’s dilemma. He wanted to help the boy.

“He came home and asked me if I would be interested in becoming a priest of the Archdiocese of Miami,” said Father Mulderry. “I was given another chance to become a priest.”

“I can say it has been an enormous blessing, and I hope you can say the same,” he said about his priesthood and time at St. Gabriel. The audience clapped and cheered.

“You blessed our lives, Father,” said one woman standing among the crowd. 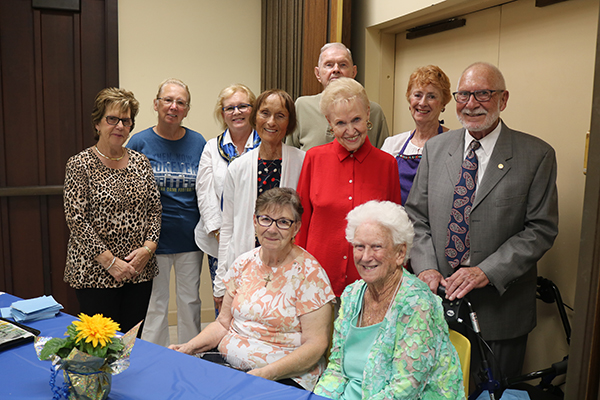 Members of the Serra Club of Broward County gather May 14, 2022, following a club event and awards ceremony.

He delivered his final comments and ended with an Irish blessing. “I am hoping to go home (to Ireland) this year. You blessed my life. I want to thank you,” Father Mulderry said. “May the road rise up to meet you. May the wind always be at your back. May the sun shine warm upon your face, and the rains fall soft upon your fields. And until we meet again, may God hold you in the palm of his hand.”

The evening ended with socializing, food and fellowship. People formed a line and one-by-one said hello and goodbye to Father Mulderry.

“We had a great turnout,” said club member Deborah O’Connor. “There were a lot of people from St. Gabriel, but we had people from different parishes of the archdiocese.”

A portion of the evening’s proceeds and donations went toward the financial gift for the seminarian. Monies also will go to purchase gift cards for more than 100 seminarians at St. Vincent De Paul Regional Seminary on their birthdays.

“What a grandiose way to conclude our fiscal year,” said Meikle. “What an incredible and wonderful night.”

ABOUT THE BROWARD SERRA CLUB

O God, who wills not the death of a sinner, but rather that he be converted and live, grant we beseech you, through the intercession of the Blessed Mary ever virgin, St. Joseph, her spouse, St. Junipero Serra, and all the saints, an increase of laborers for your Church, fellow laborers with Christ to spend and consume themselves for souls, through the same Jesus Christ your son, who lives and reigns with you in the unity of the Holy Spirit, God forever and ever. Amen.