Bleacher Brothers: On a mission for God 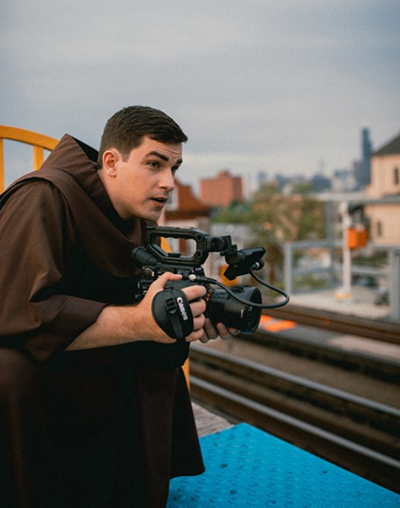 Father Casey Cole, a Franciscan friar, is an author, blogger and YouTube celebrity who came up with the idea of visiting all the major ballparks in the second year of formation. He will be at the Marlins game versus the Atlanta Braves on Friday, May 20, and at St. Mark Church in Southwest Ranches on Sunday, May 22, 2022.

SOUTHWEST RANCHES | Father Casey Cole, a Franciscan friar, author, blogger and YouTube celebrity, was a novice in his second year of formation when a vision came to him that is only now, after nine years, becoming crystal clear and a reality launching in the Archdiocese of Miami this month.

“I wrote my idea down in a journal,” said Father Casey during a YouTube video on his popular channel, Breaking in the Habit, when he announced his dream come true, the Bleacher Brothers Summer Tour. It begins this Friday, May 20, 2022, at the home of the Miami Marlins, Loan Depot Park, and continues May 21 and 22 at St. Mark the Evangelist Church and School in Southwest Ranches.

“My journal entry was entitled Greatest Idea Ever,” he said about the notation he jotted down. “Ministry of the Word plus 30 major league stadiums in one season, and that is it,” said Father Casey, putting his idea of a cross-country journey in a nutshell.

“We are attending a game at every major league baseball stadium and giving talks or celebrating Mass in many of the cities. We will try to engage people wherever we go throughout our 17,000-mile trip,” he told the Florida Catholic.

He is not going alone on the world-wind trip.

His sidekick, Franciscan Father Roberto Tito Serrano, a native of Tampa fondly known as Father Tito, will be accompanying him. Both are avid baseball fans and grew up going to games with their fathers, and both are passionate about ministry and spreading the Good News. 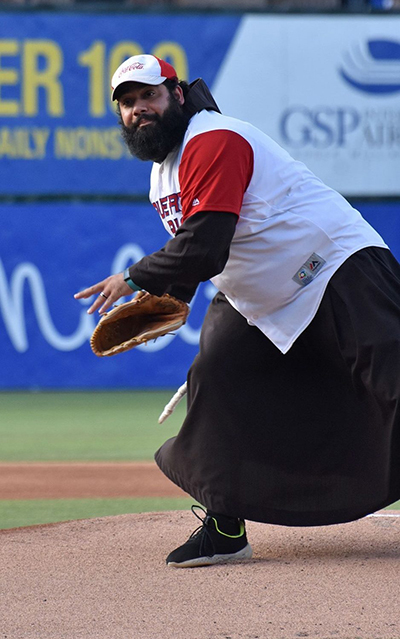 Father Tito Serrano, a Franciscan friar, is a baseball fan who grew up going to games with his father. He will throw out the first pitch at the Marlins game versus the Atlanta Braves on Friday, May 20, and at St. Mark Church in Southwest Ranches on Sunday, May 22, 2022.

“Father Tito will throw out the first pitch at the Marlins game,” said an excited Father Casey about the baseball game against the Atlanta Braves.

Afterward, the two young priests will stop at St. Mark Church, where they will visit students at the parish school, celebrate weekend Masses and give a presentation at 6:30 p.m. on Sunday, May 22, entitled Faith Journey, Discernment and Vocation.

According to Father Casey, the men also are visiting St. Brendan Elementary School in Miami and St. Thomas Aquinas High School in Fort Lauderdale before they leave Florida.

“I invited them,” said Father Jaime Acevedo, pastor of St. Mark. He has been following Father Casey on YouTube since the Franciscan began his multimedia videos as a seminarian, with the idea of sharing his story and journey to the priesthood.

Who are these energetic, young evangelizers?

Father Casey grew up in Lancaster, Pennsylvania, but went to high school in North Carolina. He entered the Franciscans after attending Furman University, a private liberal arts school in South Carolina where he earned a degree in religious studies with a minor in poverty studies. Father Casey was ordained in 2019, becoming a Franciscan of the Holy Name Province. During the start of his ministry, he served the University of Georgia in Athens before going to Macon, Georgia.

“I have served as the chaplain of a Catholic high school, parochial school and university ministry for two years,” he told the Florida Catholic. 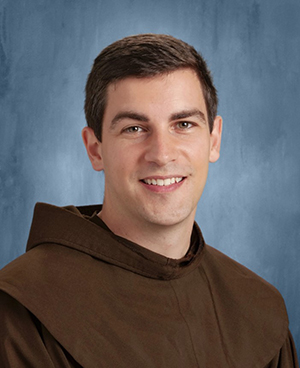 Father Casey Cole, a Franciscan friar, is an author, blogger and YouTube celebrity, will be at the Marlins game versus the Atlanta Braves on Friday, May 20, and at St. Mark Church in Southwest Ranches on Sunday, May 22, 2022.

Father Casey is also a presenter at parishes and other venues around the country and continues to write. He has published several books, “Called: What Happens After Saying Yes to God”; “Let Go: Seven Stumbling Blocks to Christian Discipleship”; and his most recent one, “The Way of Beatitude: Living Radical Hope in a World of Division and Despair,” which can be purchased online.

The YouTube channel he created has up to 550,000 viewers depending on the video subject. He explained that vocations, evangelization and catechizing are at the heart of his productions, designed to reach people beyond the pews and wherever they are tuned in on their computer.

Father Tito, ordained in 2020, is a military brat who lived at MacDill Air Force Base in Tampa until he was 6 years old. His father was then assigned to a base in Germany until the family uprooted and moved again to the Midwest. Father Tito joined the Franciscans of the Holy Name Province in 2011 and was ordained in 2020. Currently, he serves as a campus minister at Siena College in Loudonville, New York.

The Franciscan duo plan to travel 12,000 miles by car and 5,000 miles by plane in their 11-week trip to 30 major league baseball stadiums. But their journey is not all about bats and balls and hotdogs. They hope to hit some home runs and score big points with the fans and others they meet along the way, maybe even planting seeds of vocations in some hearts.

“For us, it is meeting the people in the public square and bringing the word of God to them,” said Father Casey. “It is an adventure. It is a challenge. It is a cool thing to do. We want to go to the stadiums and wear our habits and be a visible witness and invite people to come on home.” 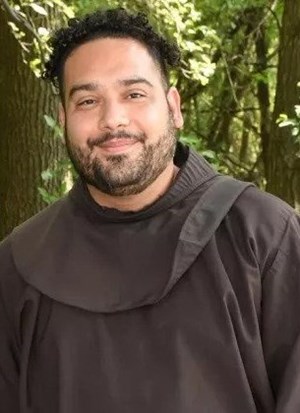 Father Tito Serrano, a Franciscan friar, will accompany his classmate on a tour of all the major ballparks this summer. Their tour will span 17,000 miles and last 11 weeks.

The Franciscans are hoping to meet other religious along the way and offering to serve at soup kitchens and other outreach ministries while also helping out at parishes.

“We would love to see what the Church looks like throughout the country,” said Father Casey. “We will be telling our story.”

Gus Delafe, a youth minister helping to organize the Franciscans’ visit at St. Mark, said he is excited about the men coming to the parish. He is expecting over 800 people at the talk scheduled Sunday after the 5 p.m. Mass. He said the parish welcomes all who want to come.

“They will be talking about their journey, discernment and vocation. The beautiful story is that everyone here has been following the faith journey of one of the seminarians who grew up in the parish and attended the school,” Delafe said.

That would be Andrew Vitrano-Farinato, who continues to be active at St. Mark and is now a seminarian for the Archdiocese of Miami. He was ordained a deacon this April and expects to be ordained next year.

“The Franciscans’ talk ties into Deacon Andrew’s journey that everyone has been following and is coming to life,” Delafe said. 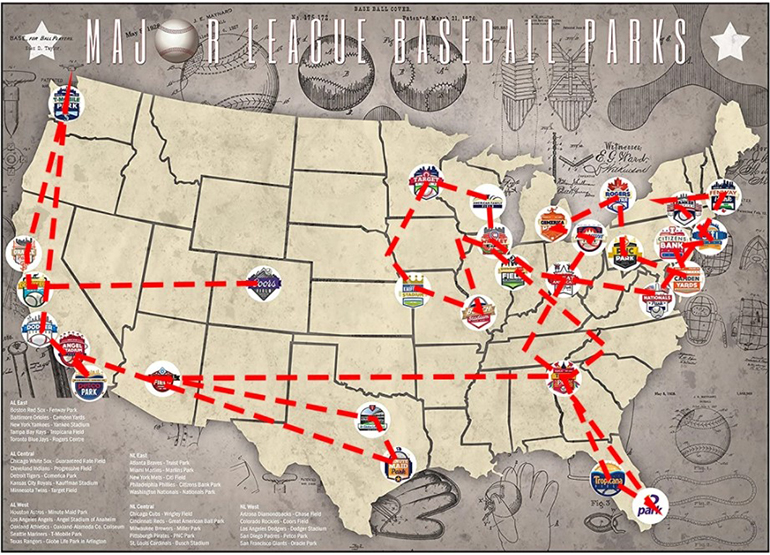 Map of the 11-week, 17,000-mile summer tour of all 30 baseball parks that Franciscan Friars Casey Cole and Tito Serrano. The tour starts in Miami this Friday, May 20, and moves to St. Mark Church in Southwest Ranches on Sunday, May 22, 2022.

Valli Leone - 05/18/2022 10:13 PM
Sounds like fun! And the rewards are eternal! Surely the Lord Jesus will be with you wherever you go, Fathers Casey and Tito, as well our prayers and fastings. May our Heavenly Father be glorified in all you do on this tremendous journey, and may the Holy Spirit and His heavenly army of angels protect you and provide many heavenly grand slams of evangelization along the way! Jesus never fails! âï¸âï¸ð