Jesuit Father Guillermo García-Tuñón is president of Belen Jesuit Preparatory School in Miami. This article is one of his daily emailed messages to Belen students, written under the title “To the band of brothers.” This one was published Feb. 3, 2021. 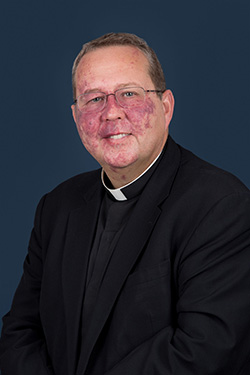 From Dr. Martin Luther King, Jr.: “I have decided to stick with love, hate is too great a burden to bear.”

Look, you don’t have to be a scriptural scholar to realize this is the heart of the Bible. From Genesis to Revelation, the authors of the Bible tell stories of a loving and merciful God who prefers for people to “rend their hearts, not their garments” (Joel 2:13). Every chapter, every verse, every lesson you can learn is focused on teaching about the terrible consequences of hate and the powerful experiences of love.

While there are some who may struggle to find it clearly in the Old Testament, there is no excuse to not find it clamoring in your face in the New. The birth, life, death, and resurrection of Jesus Christ is all about loving God and your neighbor. “No one has greater love than this, to lay down one’s life for one’s friends” (John 15:13). As a matter of fact, Dr. King’s quote is embodied most perfectly in the person of Jesus Christ and, in particular, Jesus on the cross.

That cross, which represents the sin and hate of the world, was the burden carried by Jesus so that the world could be saved. From that cross emanated the unconditional love of God, His desire to forgive even under the worst of circumstances, and His ability to conquer all things, even death. When we sin (and that is exactly what racism is — a sin), we place that burden upon those whom we sin against.

For me, what is most powerful about Dr. King’s quote is that, while he carried the burden of the cross of discrimination placed on his shoulders by bigots and racists, he refused to respond with hate. Like Jesus, he carried the cross and it was this sacrifice that helped bring about significant change and lighten the load for those who followed.

From Rosa Parks: “I had no idea that history was being made, I was just tired of giving up.”

Rosa Parks took an unpopular stand against the racism she experienced. It wasn’t that she experienced it once and then decided to make a statement. No, she had experienced it time and time again and, finally, mustered up the courage to do the right thing. She refused to allow herself to be abused, belittled, and violated. It cost her a lot of ridicule and put her in a very dangerous situation, but it helped light a spark of awareness and action that things had to change.

For Mrs. Parks, it wasn’t about making it into the history books, it was about changing them because that history was unfair, immoral, and unjust. She may not have been aware that her actions would have such an impact decades later and her words would resound on posters hanging on school walls, but they have helped bring about change. What this means for us and what we can potentially do is outstanding. Not easy, but definitely outstanding.