'Beauty that makes the soul rise to God'

English Spanish
A relic of St. Ignatius Loyola, founder of the Jesuit Order, awaits placement in the altar of Belen Jesuit Prep's new 600+ seat chapel as Archbishop Thomas Wenski presides at the dedication Mass, May 1, 2022.

Archbishop Thomas Wenski pours oil of chrism on the altar of Belen Jesuit Prep's new 600+ seat chapel as part of the consecration rite, May 1, 2022.

Jonathan Sanchez, director of music ministry at Belen Jesuit Prep, directs the choir and orchestra that provided the music at the dedication of the school's new chapel, May 1, 2022.

Fellow clergy applaud for Jesuit Father Guillermo Garcia-Tuñon, president of Belen Jesuit Prep, under whose leadership the school was able to build a long-awaited chapel, which was dedicated May 1, 2022.

View of the sanctuary of Belen Jesuit Prep's new 600+ seat chapel during the dedication ceremony, May 1, 2022.

Jesuit priests, deacons and students who served at the dedication Mass pose outside Belen Jesuit Prep's new 600+ seat chapel, May 1, 2022.

MIAMI | The huge white chapel at Belen Jesuit Preparatory School may be the newest house of worship in the archdiocese. But in a way, its foundation reaches six decades deep. 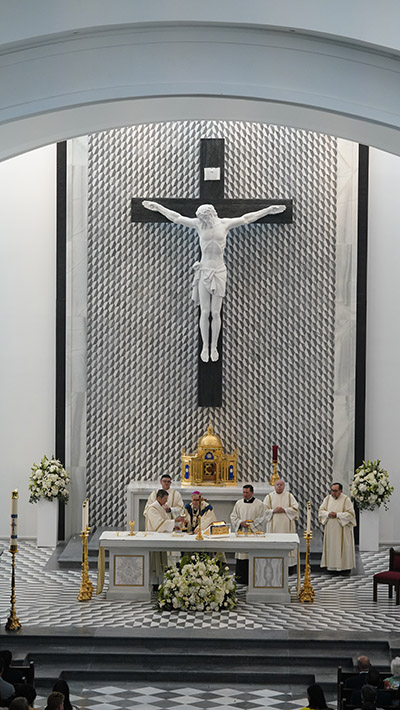 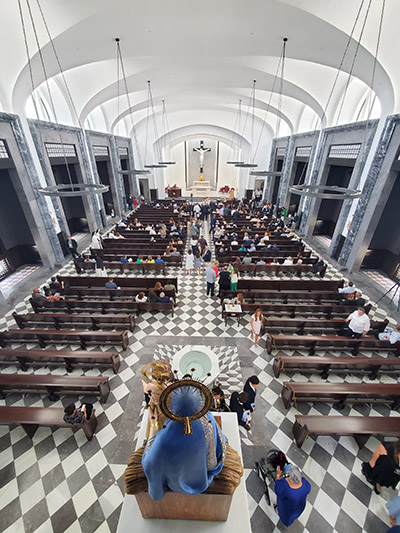 The forerunner, a Jesuit chapel in Havana, was confiscated in 1961 by Fidel Castro, and the Jesuits were forced off the island at gunpoint. Now, their Jesuit heirs in Miami have both a memorial and a place to continue worshiping and serving God.

“This community has been waiting for 61 years since Castro stole their campus,” said Jorge Hernandez, the chapel’s architect, at the chapel dedication May 1, 2022. “It’s always very rewarding [to finish a building], but this is even more special.”

He had plenty of agreement. An invitation-only crowd of staff, faculty, friends and prominent alumni – including Hernandez, a 1974 graduate – packed the 638-seat chapel to see Archbishop Thomas Wenski bless the building and celebrate the first Mass there.

Following time-honored tradition, the archbishop knocked on the chapel door, which was opened by Jesuit Father Guillermo Garcia-Tuñon, president of the school. The archbishop then gave him a ceremonial key to the chapel.

After the procession, Archbishop Wenski placed a framed relic of St. Ignatius of Loyola – a fragment of a femur – in the side of the altar facing the Tabernacle. The archbishop then consecrated the chapel, sprinkling holy water throughout and anointing its altar and walls with the oil of chrism.

Finally, the Paschal Candle and other candles were placed around the altar and lighted, along with the house lights – illuminating 10 artworks of Jesuit martyrs and missionaries, painted by Spanish artist Raul Berzosa.

Steven Lee, a permanent deacon who assisted at the Mass, said he was struck by the symbolism of lighting embers of smoking incense at the four corners of the altar. “It was like all the prayers that will be offered there,” said Lee, whose son, John, graduated from Belen in 2020.

CHRISM FOR A CHAPEL

Archbishop Wenski pointed out that the chrism was the same oil individual Catholics receive during baptism and confirmation, for “we too have been set aside for a sacred purpose ... As we dedicate this altar and set it apart for God’s service, let us also rededicate ourselves – as members of Christ’s faithful – to work together for God’s kingdom.”

He called attention to the violent deaths of many of those in the 10 paintings in the chapel, urging his listeners to emulate their love and courage.

“Today, Christ calls us at this altar to be ‘men for others,’” he said, quoting the Belen school motto, “by witnessing to the faith without fear or shame in a culture that is increasingly hostile to faith.”

Providing music was a 25-voice choir of alumni, professional singers and friends from Florida International University, accompanied by harp, organ, tympani and a brass quintet. Jonathan Sanchez, the school’s director of music, produced the performance after only three rehearsals.

“There is so much beauty in the liturgy,” Sanchez, who also conducted, said after the service. “We hope this space will help people experience it.”

In designing the chapel, Hernandez, the architect, blended various styles, including German and neo-classical. The very dimensions of the 14,000-square-foot structure are based on the “golden rectangle” concept, developed by the ancient Greeks to impart a sense of balance.

“This is more than stones and metal,” remarked Andres De Angulo, dean at Belen. “It’s an amazing opportunity to grow in faith.”

The result also delighted Father Pedro Suarez, a former math teacher as well as former president of the school. 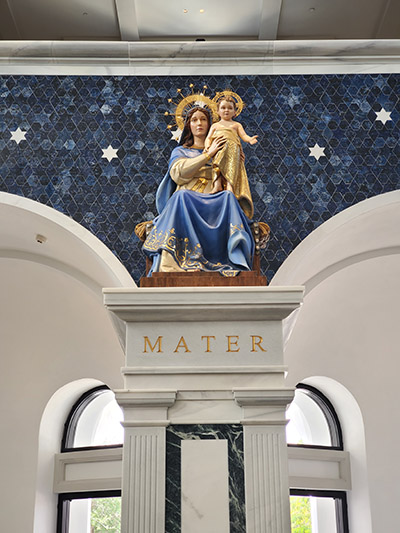 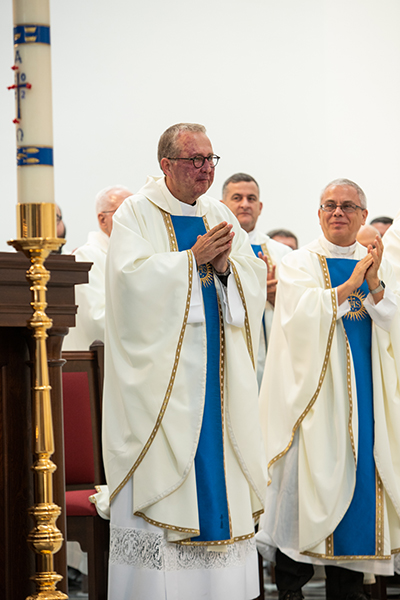 Fellow clergy applaud for Jesuit Father Guillermo Garcia-Tuñon, president of Belen Jesuit Prep, under whose leadership the school was able to build a long-awaited chapel, which was dedicated May 1, 2022.

“In this building, beauty and math are present together,” said Father Suarez, who headed the school from 2009 to 2016 – and graduated from there in 1958. “This is beauty that makes the soul rise to God.”

The new chapel was built for $10 million, raised from benefactors including alumni. Father Garcia-Tuñon called it the most important project in the school’s history in Miami.

“We wanted the building at the entrance as a very public statement that we’re a Catholic school,” he said in an interview.

He also said he wanted his students “to experience the beauty of Catholic art and architecture, and how it comes together to glorify God and enhance worship. We want them to be proud of their Catholic heritage.”

The new Miami chapel is spiritual heir to El Colegio de Belen, founded in 1854 by Jesuits in Havana. That's the school seized by Castro – ironically, a graduate himself – after he overthrew the Cuban government and imposed a Marxist regime. Castro’s soldiers marched the Jesuits through the streets and onto a ship. Castro then turned the Colegio into a military academy.

But the Jesuits had already prepared: Other members of the order met with the late Bishop Coleman F. Carroll, the first Catholic prelate of Miami. He gave permission for the Jesuits to open a new school at Gesu Church, before moving to their own building. In 1981 they occupied new quarters in western Dade County, which now covers 34 acres.

Following the chapel dedication, people gathered in the school’s courtyard for a buffet of mushroom and butternut squash ravioli, along with light music by a jazz trio. Many of the attendees spoke of long roots at the Belen school.

Ricardo Martinez-Cid called himself a “proud graduate,” with three alumni brothers. He said one son is another alumnus, with another in his freshman year. “I'm very proud to see the school flourishing, and that the boys will have a place to worship on campus,” said Martinez-Cid, a lawyer in Miami.

José Rasco, who runs an internet company out of Miami, called it “surreal” to see the new chapel. As a student, he had worshiped in the smaller, 70-seat Chapel of the Immaculate Conception just off the central courtyard. “Now they have a big, beautiful, holy building,” he said.

Wife Jackie said her grandparents were married at the chapel on the Jesuit campus in Havana. “This feels like coming full circle,” she said. She added a hope that their son José, currently studying at the school, will be married in the new chapel.

As lavish as the dedication was, the chapel still is not finished. It will close in June and July for its next phase: installation of a 2,000-pipe organ. The chapel will reopen July 31 for the feast of St. Ignatius, with Archbishop Wenski returning to bless the organ.

The 10 a.m. event will close out the school’s year-long 60th anniversary, marking the exodus of Jesuits from Cuba that birthed the Belen school in Miami. 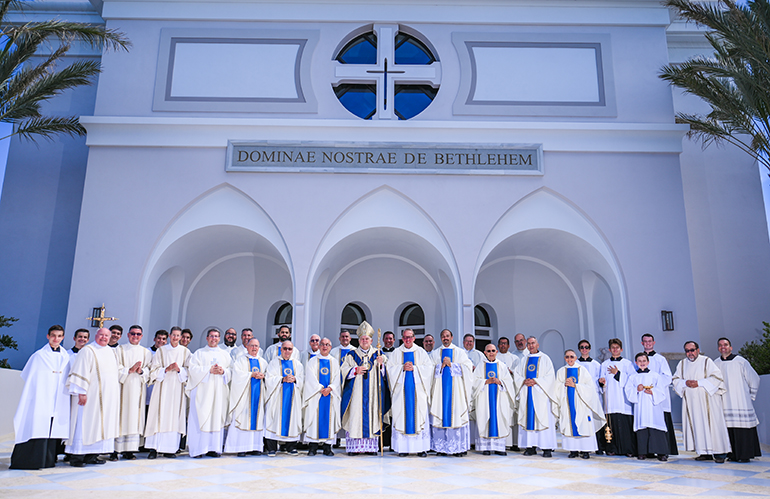 Jesuit priests, deacons and students who served at the dedication Mass pose outside Belen Jesuit Prep's new 600+ seat chapel, May 1, 2022.