And the ABCD winners are... 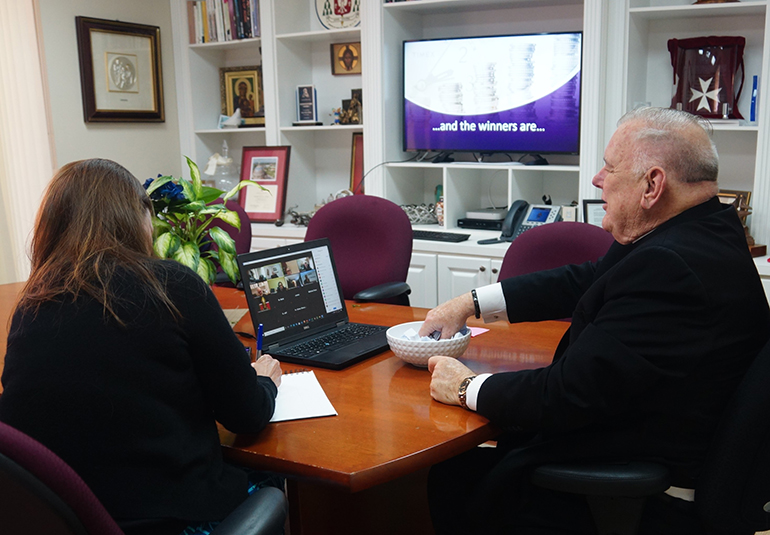 Katie Blanco Bourdeau, cabinet secretary of Stewardship and Development for the archdiocese, takes notes as Archbishop Thomas Wenski picks the winners of the "stretch goal" raffle from among the parishes that collected more than their "stretch goal" in the 2020 ABCD campaign.

MIAMI | St. Joachim Parish in southern Miami-Dade County was the big winner this week after having achieved two milestones in the 2020 ABCD campaign.

The parish won $15,000 — first place — in a raffle among parishes that exceeded their “stretch goal”: that is, collected more ABCD money than the average cash they had collected over the past three years. And it also won $5,000 for having increased the number of ABCD donors who gave the equivalent of $1 a day — $365 a year — or above.

That winning combination helped St. Joachim amass more money than St. Augustine Parish in Coral Gables, which topped the list of parishes that increased their $365-a-year donors. The prize for that achievement was $15,000.

This was the first time such incentives were included with the annual ABCD campaign, and the timing proved fortuitous, said Katie Blanco Bourdeau, cabinet secretary for Stewardship and Development in the archdiocese.

“Little did we know when we did this that COVID was coming, so last year, more than ever, was a great time to incentivize the ABCD success of the parishes,” she said. 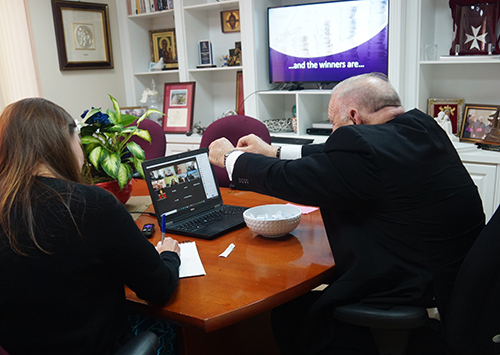 Archbishop Thomas Wenski shows parish representatives on a Zoom call the name of a winner in the "stretch goal" raffle as Katie Blanco Bourdeau, cabinet secretary of Stewardship and Development for the archdiocese, takes notes.

ABCD is the annual campaign that funds the offices and ministries of the archdiocese, such as Catholic Charities and Respect Life. ABCD also supports the education of future priests and the continued operation of Catholic schools in low-income neighborhoods. Pledges are taken up every year in January with cash due by the end of February the following year.

“It’s impressive when you look at the number of parishes that did it, especially in the year of COVID,” she said.

Parishes who do not meet their goal have to make up the difference to the archdiocese.

Four prizes were given out in each incentive category. Those who exceeded their stretch goal were entered in a raffle and given a certain number of tickets depending on the percentage by which they increased their cash collection. Archbishop Thomas Wenski drew the winners out of a bowl during a Zoom call with parish representatives on April 14, 2021.

Parishes that increased their number of $365-a-year donors were ranked by combining the percentage change in money collected and the increase in the number of donors. The top four in this category, and the amount of money they won, are:

Parishes that met their stretch goal received one raffle ticket each. They were, in alphabetical order:

Parishes that exceeded their stretch goal by 10% received two raffle tickets each. They were:

Parishes that exceeded their stretch goal by 15% received three raffle tickets each. They were:

Parishes that exceeded their stretch goal by 20% and received four raffle tickets each were:

Parishes that exceeded their stretch goal by 25% and received five raffle tickets each were:

Will similar incentives be offered for the 2021 ABCD campaign? “The archbishop made it sound like we were,” Blanco Bourdeau said.