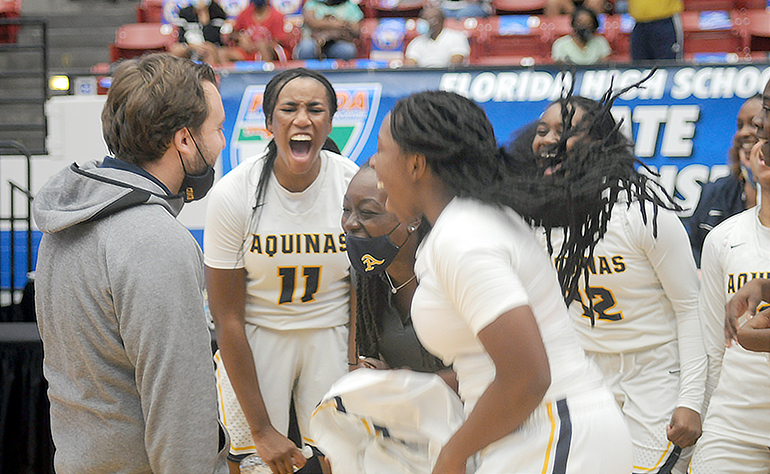 St. Thomas Aquinas coach Oliver Berens fires up his team in celebration after their 62-60 victory over Wekiva in the FHSAA Class 6A girls basketball championship game Saturday, Feb. 27, 2021, at the RP Funding Center in Lakeland. The Raiders won their first championship.

LAKELAND | St. Thomas Aquinas has won championships in nearly every sport the Florida High School Athletic Association offers. Thanks to senior Samara Spencer and her teammates, the Raiders can add girls basketball to the list of STA sports that have won championships. 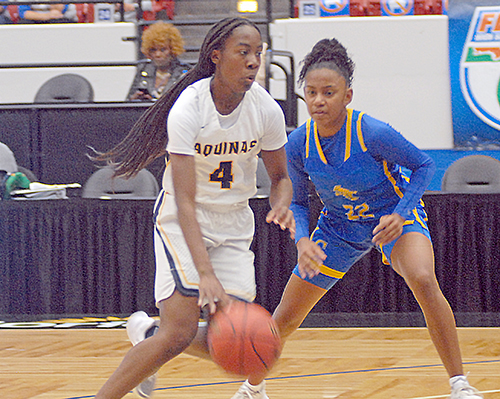 St. Thomas Aquinas' Karina Gordon (4) drives past Charlotte's Aryana Hicks during the second half of St. Thomas Aquinas' 62-48 victory over Punta Gorda Charlotte on Thursday, Feb. 26, 2021, in the FHSAA Class 6A girls basketball state semifinals at the RP Funding Center in Lakeland. Gordon had 24 points and nine rebounds. 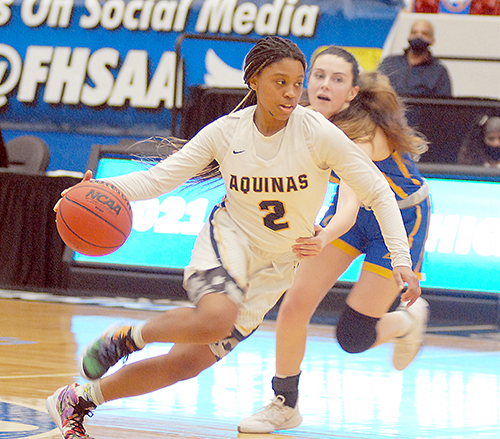 St. Thomas Aquinas guard Maya Williams drives past Charlotte's Adriana Iorfida during the second half of St. Thomas Aquinas' 62-48 victory over Punta Gorda Charlotte on Thursday, Feb. 26, 2021, in the FHSAA Class 6A girls basketball state semifinals at the RP Funding Center in Lakeland.

The Raiders won their first title after making the 1994 Class 4A final and 2019 Class 8A final. Unlike the 2019 final, which had a heartbreak ending, Aquinas willed their way to this title. They’re the second St. Thomas team this school year to win a title, with football being the first.

“This group has been resilient all year. They've been able to follow game plans and execute them for 32 minutes,” St. Thomas Aquinas coach Oliver Berens said. “We never got down even when the game was kind of leaning their way for the majority of it. We just stuck with it, kept fighting one possession at a time. I feel we were really built for this moment, and it showed tonight.”

The Raiders proved in the state tournament they can beat teams in several different ways. In a 62-48 semifinal victory against Punta Gorda Charlotte, the Raiders advanced to the final riding two players who had won titles before. Spencer, who won a 2018 championship with Fort Myers, had 24 points in that game. Sophomore Karina Gordon, who was a seventh-grader on Miami Country Day’s 2018 championship team and played a strong role as an eighth-grader on MCD’s 2019 title, also had 24 points and nine rebounds.

In the final against Wekiva, it took four players scoring in double figures. Spencer had seven rebounds to go with her 17 points. Gordon had 15 points and two assists. Jada Green added 16 points and 10 rebounds, while Breanna Gustave had 14 points and 12 rebounds.

St. Thomas Aquinas' Dakota Degenhardt (10) grabs a rebound in the final seconds of the second quarter of St. Thomas Aquinas' 62-60 victory over Wekiva in the FHSAA Class 6A girls basketball championship game Saturday, Feb. 27, 2021, at the RP Funding Center in Lakeland. Degenhardt passed to Breanna Gustave, who hit a 3-pointer that cut the Raiders' deficit to 31-30 at halftime. The Raiders won their first championship.

St. Thomas Aquinas senior Samara Spencer (3) goes for a layup against Wekiva defenders during the third quarter of St. Thomas Aquinas' 62-60 victory over Wekiva in the FHSAA Class 6A girls basketball championship game Saturday, Feb. 27, 2021, at the RP Funding Center in Lakeland. Spencer had 17 points to help the Raiders win their first championship. 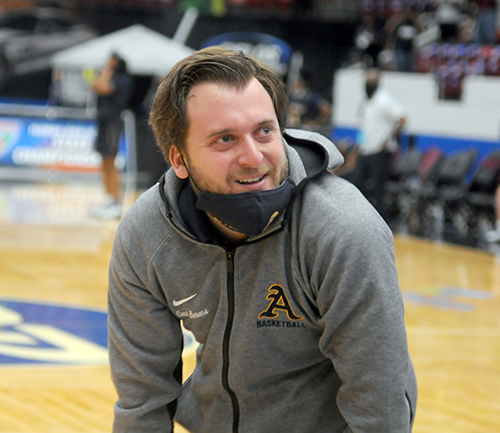 “I told them after the very first game of the year in order for us to reach our goals, we're going to need Bre and Jada to be impacts, because we can't win if they don't play well at the highest level,” Berens said. “Both of them played exceptionally well, and we needed every single point and every single rebound.”

Green and Gustave also hampered 5-11 Wekiva center K’Nari Holliday. Holliday had 11 points and six rebounds, but only two points in the fourth quarter. “In the beginning, she was really getting me,” Green said. “So I had to figure out how to defend her straight up without fouling her.”

STA’s victory against Wekiva also came because of several contributions from players who were on the 2019 finalist team. Junior guard Maya Williams teamed with Spencer to limit Wekiva’s Jada Eads. Eads had scored 30 in a semifinal victory against Winter Haven, which woke up the Raiders.

Spencer and Williams, both players off the 2019 team, teamed to limit Eads to 19 points. “I knew she was quick, and my job was to contain her up front,” Williams said. “At the beginning, it was a little rocky, but I pulled through when I got in the game.”

Spencer added, “Maya did her job. It was just all about our traps, because she's a much shorter guard. If we trapped the ball, hands up, close it, we knew we could get something good out of it.”

Unlike the Raiders, Wekiva had the experience of winning a title. The Mustangs were in their third Final Four in four years, trying to win their first title since 2019. Eads had five points in Wekiva’s 11-4 game-opening run. However, Green hit a 3-pointer, and the Raiders rallied to within 14-13 at the end of the first quarter.

The game stayed close, neither leading by more than 7. Gustave had two big 3-pointers in the first half. One came with 10 seconds left in the first half. Dakota Degenhardt, another 2019 veteran, grabbed a missed free throw and passed out to Gustave, who drilled a 3-pointer to give the Raiders a 30-29 lead.

“I had a feeling that the rebound was going to come to me,” Degenhardt said. “I got around the big girl and passed it out to Bre. I knew she'd finish the job, and she did. it was a really big 3 for us to make.”

Eads’ two free throws put the Mustangs up 31-30 at the half. Several more lead changes ensued, leading to another close ending. Spencer’s layup with 57 seconds left in the game put the Raiders up 61-60, but they had to dodge several Wekiva attempts.

Shaniyah McCarthy nearly stole a Raiders pass with 18.7 seconds left. Then, in a potential flashback to 2019’s ending, Spencer dribbled the ball out of bounds off her knee. In 2019’s final, the Raiders called a timeout they didn’t have, allowing Tampa Bay Tech to hit technical free throws to force overtime and eventually win.

“For me, usually in that moment, I would've been mad at myself,” Spencer said. “I knew there was 14 seconds left. I trust my team. I knew we were going to get a defensive stop. As soon as it happened, I knew it was going to go my way.”

Three seconds later, Spencer and Williams trapped Eads, forcing a Wekiva timeout. Then with 6 seconds left, a harried McCarthy pass tipped off Holliday and out of bounds. Green hit a free throw with 4.8 seconds left, and the Raiders clinched the victory.

To even reach the state tournament, the Raiders had to battle all season. If COVID wasn’t enough, defending 6A champion Pompano Beach Blanche Ely seemed to await every step of the way. A delayed season started with a 57-46 loss to Blanche Ely, and the Raiders lost twice more to the Tigers. 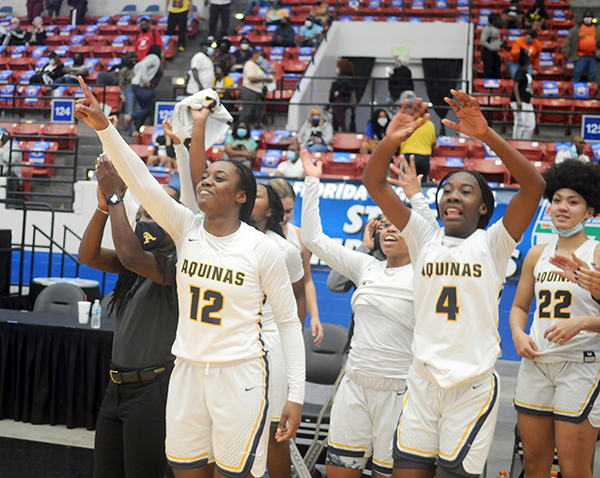 St. Thomas Aquinas players give thanks to their fans for their support in the Raiders' 62-60 victory over Wekiva in the FHSAA Class 6A girls basketball championship game Saturday, Feb. 27, 2021, at the RP Funding Center in Lakeland. The Raiders won their first championship.

A schedule that featured 2021 5A champion Plantation American Heritage, 2A champion Miami Christian and 7A finalist Miami also helped steel the Raiders.

Berens said that returning most of the team from last season’s region semifinalist helped the Raiders overcome the loss of two tournaments to COVID. He said the team was originally supposed to start Dec. 6, 2020, but COVID pushed the start to Dec. 27. Another COVID delay made a Jan. 6, 2021 date with Ely the Raiders’ season opener.

Berens said that familiarity and following game plans helped the team. “That's one thing I'm so happy about this team is they like to have fun off the court, but every time it's time to get down to business and play for something big, we're gritty and tough, and we lock in,” Berens said. “We had some missed assignments earlier in the year at the end of big games, like in the Big 8. We executed our assignments perfectly down the stretch.”

That mentality helped when the Raiders faced Blanche Ely in the Region 4 semifinals. Gustave hit a 3-pointer in the final seconds to help St. Thomas Aquinas eke out a 48-46 victory. That avenged a 46-42 loss to Blanche Ely in the same round last year, which eventually led to Ely beating Wekiva for the 2020 state championship.

COVID also took away some faith-sharing opportunities for the Raiders this year. However, Spencer said that they lived their faith by coming together. That begins by praying as a team, something that she said dignified the team and held them together. “We’re best friends off the court,” Spencer said. “A lot of times we are together and do things together, whether it is helping our parents do something or help our parents set up something for us to do, we all do it together. That’s a big part of what we do.”

Berens said that unity helps them to share their faith. “They really have people looking up to them. They don't even realize it,” Berens said. “They just set a good example and are so helpful and kind.” 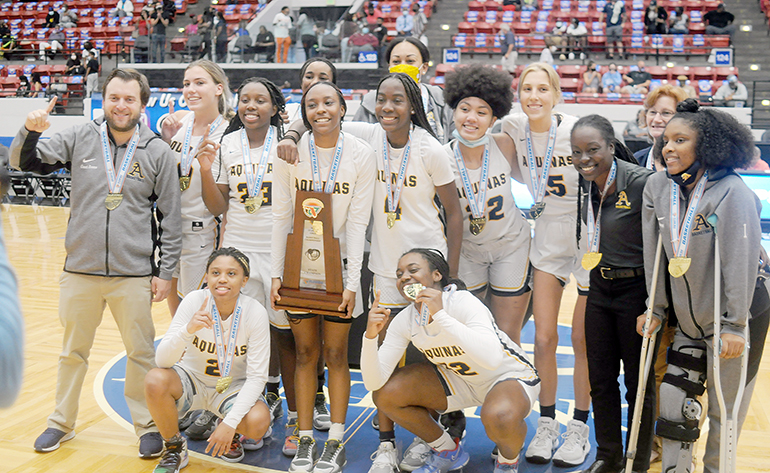 St. Thomas Aquinas players and coaches celebrate with the championship trophy after their 62-60 victory over Wekiva in the FHSAA Class 6A girls basketball championship game Saturday, Feb. 27, 2021, at the RP Funding Center in Lakeland. The Raiders won their first championship.