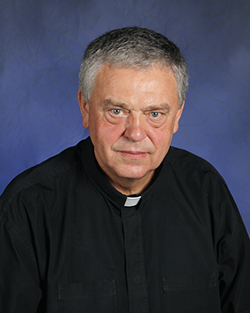 POMPANO BEACH | Funeral services will take place March 2 and 3, 2021, for Father Stanislaw Rakiej, a longtime chaplain to Polish migrants who served as pastor of Our Lady of Czestochowa Polish Mission until Jan. 1 of this year.

Father Rakiej, 71, died Feb. 27 in Pompano Beach after a long struggle with pancreatic cancer. He had been a priest for 46 years, and a member of the Society of Christ for 52 years.

The Society of Christ is a religious community devoted to the pastoral care of Poles in the diaspora.

“A few weeks ago, I hosted a dinner for him at my residence with several of the Polish priests working in the archdiocese,” said Archbishop Thomas Wenski. “Though he knew that the treatments were unable to halt the spread of his cancer, he was in great spirits. His brother, who is a priest working in Poland, was able to be with him these last several days.”

After ordination, he worked as a vicar in Holy Spirit Parish in Szczecin (1974-1977). From 1977 to 1992, he served as chaplain of Poles in Australia and New Zealand: Adelaide, Ashfield, Coogee, East Roseville, Geelong, Ponsonby-Auckland, and Bankstown.

Beginning in 1992, he served as chaplain to Polish immigrants in the United States and Canada: Minneapolis, Chatham, Scarborough, Oshawa.

On Sept. 1, 2015, he was named pastor of Our Lady of Czestochowa Polish Mission in Pompano Beach, where he remained until his passing. Society of Christ Father Hubert Zasada came to assist him during his illness and recently assumed his duties as pastor.

As pastor of the Polish mission, besides Masses at Our Lady of Czestochowa, Father Rakiej attended to the Polish communities at Holy Spirit Church in Lantana, St. Joseph on Miami Beach and the Basilica of St. Mary Star of the Sea in Key West.

Archbishop Wenski will celebrate the funeral Mass Wednesday, March 3, at 10:30 a.m. Due to social distancing requirements and the expected number of faithful, the Mass will be celebrated at St. Ambrose Church, 380 S. Federal Highway, Deerfield Beach.

Father Rakiej will be buried in his native Płoty, Poland.

Articles(50)
Basilica of St. Mary Star of the Sea